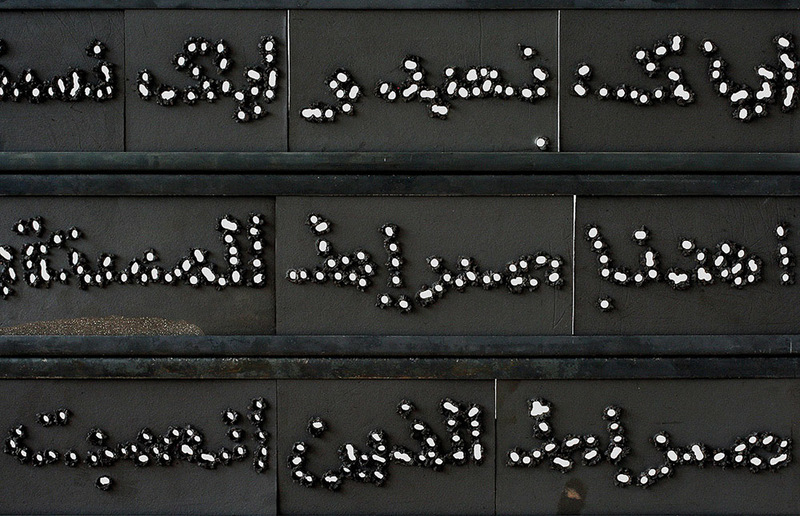 born in St. Anna am Aigen, Austria, in 1966; lives and works in Vienna and Berlin. Gerstel studied Law at the Universities of Graz and Vienna. He won the “Keramik-Preis“, Salzburg, twice and the Grand Prix UNICUM at the 2nd International Ceramic Triennale, Maribor. His sculptures are on display in exhibitions in Austria and internationally. His works have been exhibited i.a. at the Austrian Cultural Forum , London, and at the MAK Vienna. Gerstel’s works were presented in the KULTUM in the exhibitions “Im Hause meines Vaters gibt es viele Wohnungen“ (2003), “RELIQTE“ (2010) and “IRREALIGIOUS! Parallelwelt Religion in der Kunst“ (2011).

Wilfried Gerstel: THROUGH-AND-THROUGH OR: THE OUR FATHER AND THE FIRST SURA OF THE QU'RAN, 2007

In recent years, Wilfried Gerstel presented comprehensive series of works that combine medieval reliefs and panels with heroic figures taken from modern-day comics and thus create subtle interferences of old and new figures of salvation. In the double work featured here he makes use of his initial professional training as a ceramist to present various clay tiles that are stringed in a row in a steel framework with a special treatment. Viewed up close, these tiles let through sparks of light—like stars in the night. From a distance, the Christian prayer of the “Our Father” and the first sura of the Qur’an can be read, and the two prayer texts are placed peacefully side by side. But these “punchcards” bear peculiar traces of their creation: That is, they were shot in the form of letters into the wet clay tiles so that there holes were turned into letters that could be easily read from afar. There is a gutter in front of the two panel walls that collects the spent cartridges. Gerstel confronts the abuse of religion, the inherent logic of violence in the form of the sacral with a work that combines performative speaking in the language of prayer with an act that is profoundly opposed to the latter. The “Our Father”, the hallowing of his name, the acceptance of his will, our begging for bread and forgiveness, our own forgiving of the sins of others are as incompatible with the act of “writing” performed here as the first sura of the Qur’an: “In the name of Allah, the Most Gracious, the Most Merciful: All Praise is due to Allah, Lord of the Universe, the Most Gracious, the Most Merciful. Owner of the Day of Judgment: You alone do we worship, and You alone we turn to for help. Guide us to the straight path; the path of those on whom You have bestowed your grace, not (the way) of those who have earned Your anger, nor of those who went astray. Amen.” Here, the return of religion in the form of violence is confronted with an artwork that unfolds its therapeutic force in the contradictory re-enactment of the speech act itself.