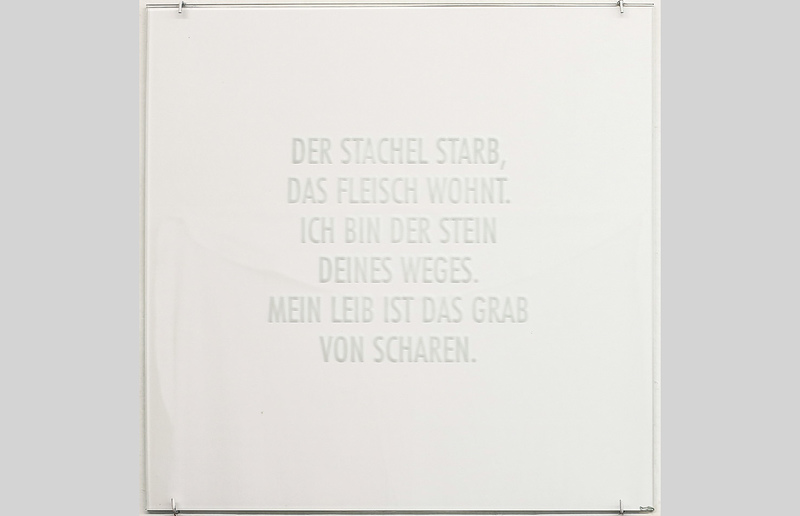 born in Kempen; Germany, in 1960; lives and works in Cologne. Schink studied Philosophy and the Media art and Audiovisual Media in Cologne. In 2002, she earned a PhD following her dissertation project at the Humboldt University, Berlin, and the Academy of Media Arts, Cologne. Her works were exhibited i.a. at the Art Basel, at the Art Cologne as well as in Krefeld, Ludwigshafen, Cologne, Stuttgart, Maastricht, Marseille, Bonn, Berlin and New York. Schink’s works were shown in the KULTUM in the exhibitions “Claudia Schink: Das Abendland: SOLILOQUIA“ (2001) and “Soul Underwear“ (2013).

passion is hunger / of the conscious mind, / suffering proves / an artful practice, / its seal will / be conferred to the dignified, the body is a place / to create countless pleasures, / the extremities / form / the instrumentarium of the mind, / the ritual / lures out your truth. your body makes possible / different strategies of torture. / you finish / the captivity / of your identity / the pain creates / the new human, your blade delves / under my veins. / the warming light / grows for me under the incision. / we become engaged / through the unending pain. I am the blaze / of your agonies. / you want to be reminded / of your status. / the spiritual space / is growing between us. the spectacle of your blood / inebriates the your senses. / you listen to your own spring / in fever. / an eyeless sleep erases / your black feeling. the tongues are white / from the flesh of pleasures. / the eyes are red from the blood / that is tasted / in the well of your salvation. look at the glory / of my martyry. / my guts / are the carrion of your good fortune your triumph grows / in the spittle of my veins. my memory / is the pain. /the wound feeds / on the flesh of recognition. / victory sprouts / in the furrow. the thorn died, / the flesh abides. / I am the stone / of your path. / my body is the grave / of swarms of people. cruelty / is a fundament / of culture. / history corrodes / the body / with its gaze. martyry / forms an instrument / of the mind. / its power / shapes the knowledge / of power. crime / is a feast of the senses. / truth / is produced on the body. / the body is pervaded / by the creditors. belief / is an assumption / on the stage of death. / the sacrifice / is the mystery / of the last atrocity

14 glass panels with sandblasted words seem to be almost immaterialized. The form, the titles, and the number of panels commemorate the Passion or, more precisely, the 14 Stations of the Cross. The texts themselves are reminiscent of liturgical language, but the Marquis de Sade has made himself at home as a godfather to at least the same extent. What they keep in this abysmal ambiguity is a rest of mystery. Thus an immaterial body of text is floating over the exhibited glass relics. It leads us into a language that refers to prayer books or dogmatic wordings, but which breaks up in not exactly defined stages—less into the dimensions of passion, lust, and ecstasy but rather into violence and cruelty. Yet their lyrical rhythmics opens up abysses which rather open than close trenches of surreality. It is about violence, especially sexual violence too, that annihilates the body, and even more the soul. Victims and perpetrators become intertwined here. Intimacy is created despite all this but uneasiness is a quite unpleasant side effect. The texts enter semantic fields that interrelate blood asceticism with modern-day crime, sexual abuse, torture and sadism, and both holy and unholy martyrs. On the occasion of the first presentation of “SOLILOQUIA“ (2001), the panels were not only confronted with the glass objects but also with a film from 1995, shocking images of women raped in the Balkan War in 1993, sardonically drowned out by Mahler’s 8th Symphony and its text from “Aus des Knaben Wunderhorn“ [The Youth's Magic Horn]: “We enjoy heavenly pleasures…“