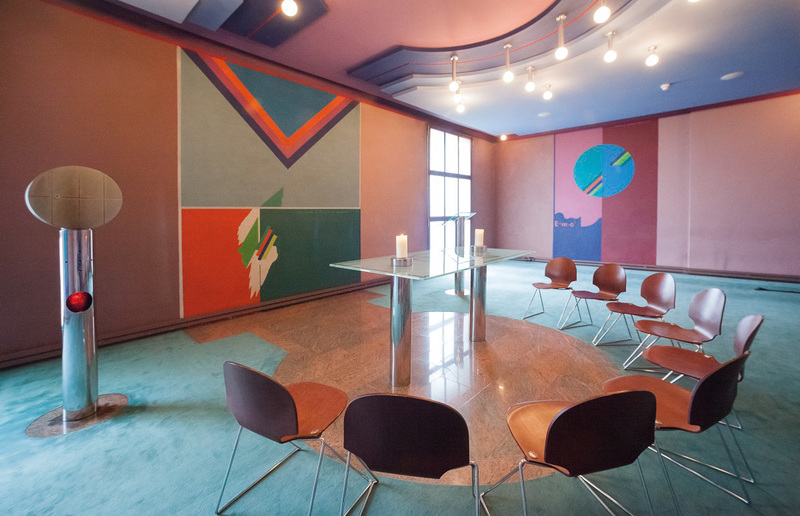 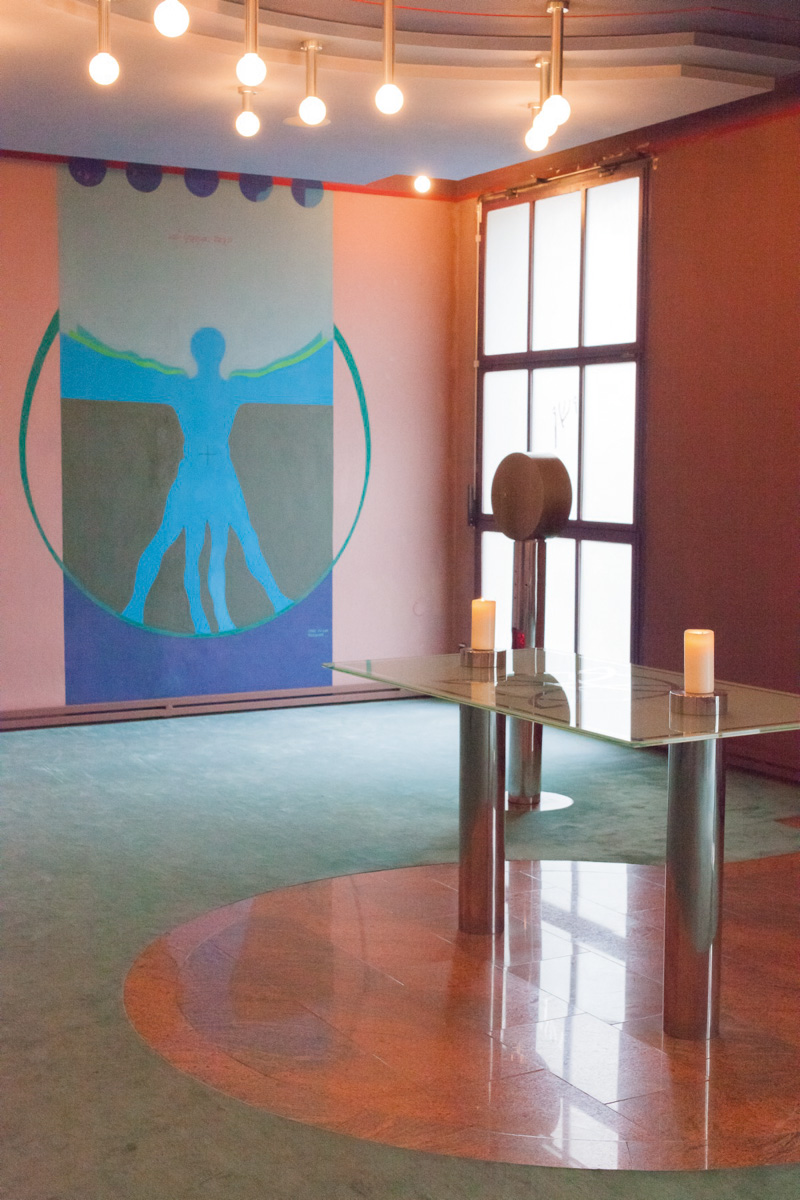 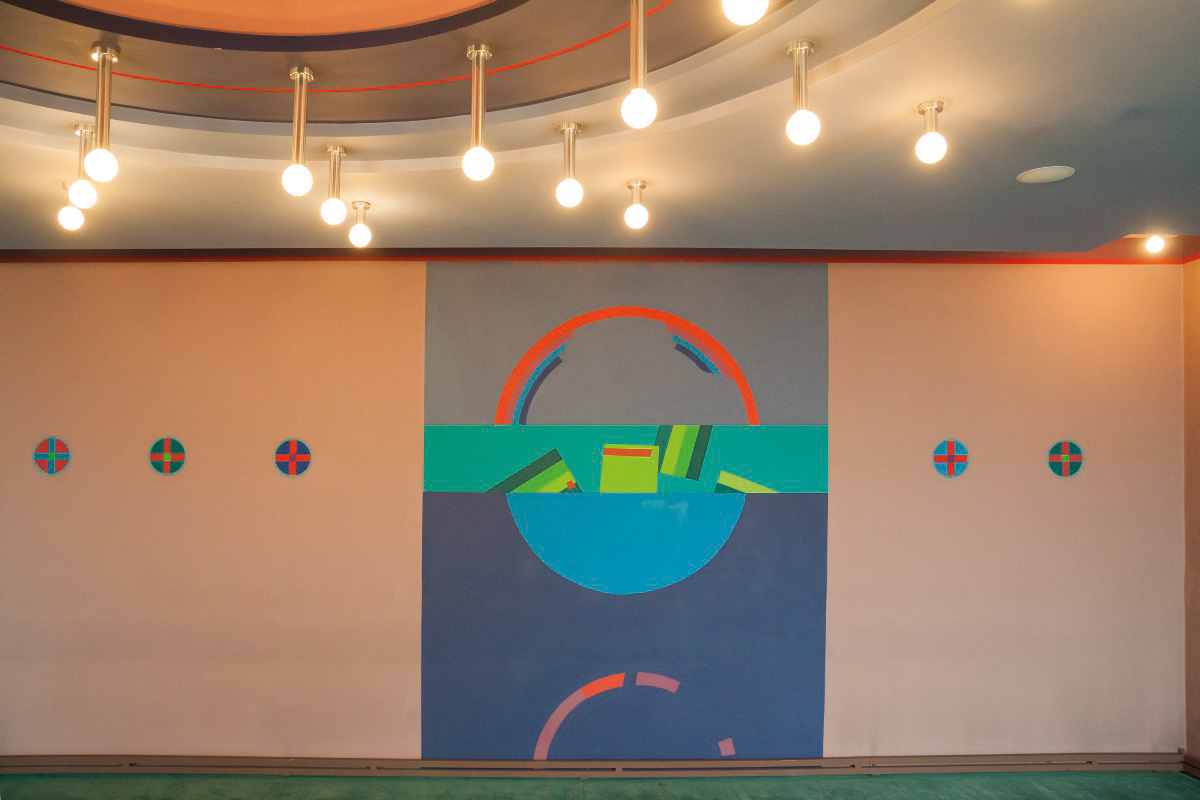 The break between traditional sacral art but also art in the sacral space cooked up in a pseudo-modern way and the just newly received art movements in the early 1970s is nowhere else easier to understand than in the first chapel designed by the artist and priest Josef Fink (1941–1999) in the Education House, Mariatrost, on the periphery of Graz, in 1974. It replaced the house chapel, which had been furnished as a “fine farmhouse parlour” (Fink) by Franz Weiß until then, and was to become a very special spiritual place for many people in subsequent years. Especially during after the Second Vatican Council, the Education House in Mariatrost was among the most pronounced sites of departure of a dialogical Church. Fink, who comes from the east Styrian town of Gnas, was already known as a bustling priest, artist, and art promoter at that time. Prior to this, he had radically changed his artistic language at the University of Applied Arts Vienna—previously a woodcarver of biblical subjects producing works of remarkably professional figurativeness, he turned into a radical advocate of abstract art. In a text accompanying the redesigned chapel, Fink made clear right away that he banked on the effectiveness and inherent logic of the painterly material, on forms and colours, “fully in the manner of constructivism”. Henceforth radically excluding the recognisability of common Christian iconography, he established a symbolism of forms, circles, coloured beams, and segments in this commissioned work. The circle appears as a half-shadowed, coloured, and veiled form to the right of the altar. In addition, it is traversed by four coloured beams. These remind of a rainbow and also of the sign that became the certainty of a new covenant with God for Noah. (Gen 9,8–17). In addition, Einstein’s formula stands for the scientific exploration and representation of mundane matters —scientific knowlegdge has always been particularly important for Josef Fink. Facing the altar, a circle is composed of several elements of different colours. It is a subsumption of a light blue circle segment on which a wide green bar rests, which in its turn is penetrated by scattered fragments of the Ark of the Covenant. On top of this towers a red circular arc with further bluish circle fragments. For Fink, this is a metaphor for Judaism, on the shoulder of which Christianity sits: “A blue tub, a heavy crossbeam, the closed circle of the ‘firmamentum’ on top of it—an allusion to the old image of the world; fragments of the Ark of the Covenant shining in the circle.” In the painting to the left of the altar, Fink invites the viewer to “meditate a lot about humankind and infinitely more about God”. For this, he quotes Leonardo da Vinci’s homo quadratus but places humankind as homo ascendens into a circle that is open at the top, and at the same time solves the latter’s relationship to the square, which still shared its centre with the circle in Leonardo’s work. Thus the geometrical figures do not only serve the purpose of only capturing human proportion relationships anymore but turn into fuzzily coded symbols that point beyond humankind. A coloured wedge directed downwards is composed in the central painting behind the altar: Every priest should have this “in the neck like a mission”! For Fink, it symbolises the Sermon on the Mount as “a far-reaching religious fact” while scattered patches of colour in the bottom part hinted at what could be understood of it, and put into practice in everyday life. The gap between, on the one hand, the purely geometrical vocabulary and Fink’s exhaustive contentual messages on the other makes clear the artist’s trust at that time in the comprehensibility of a language that only draws on the means of visual art: “Everybody understands colours because one can intuitively catch the signals of colours. You just have to entrust yourself to them.” Fink’s references to the new image of the world show how familiar he was with current scientific challenges so that his homo ascendens virtually imposes itself as a metaphor for the problematisation of the conception of the human being, as being excellently done by discussions of modern art with religious subjects. The paintings were linked to the altar only ten years later (1984), in a second redesign directed by Fink: The ceiling panels and floor designs make this connection more than clearly visible.