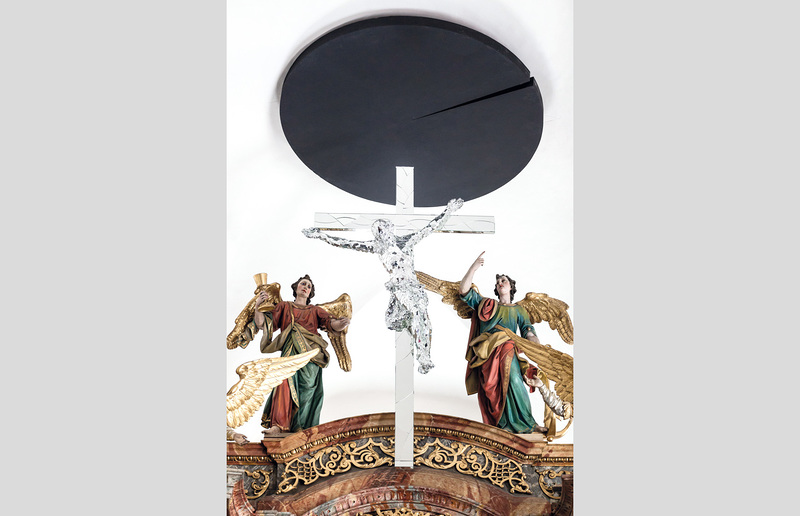 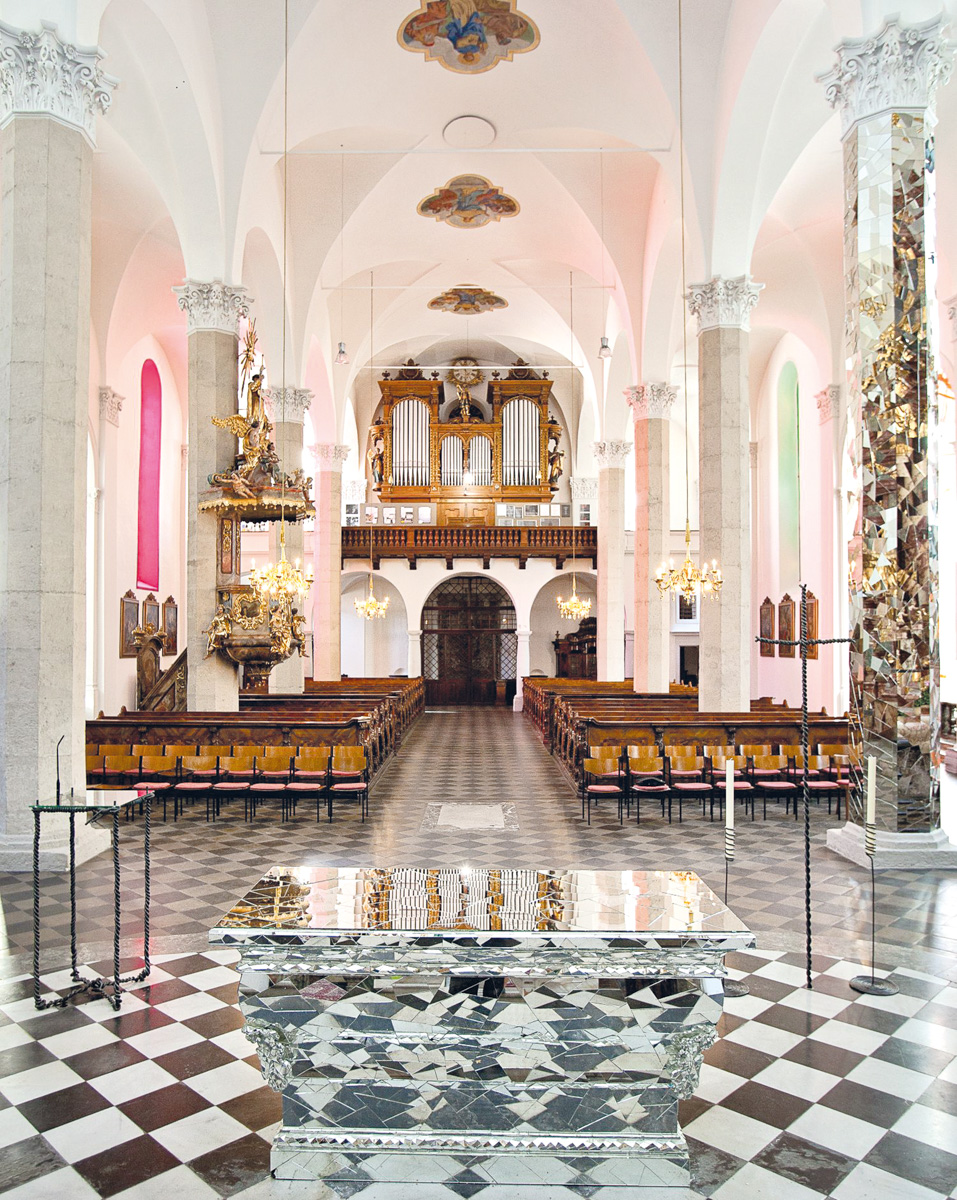 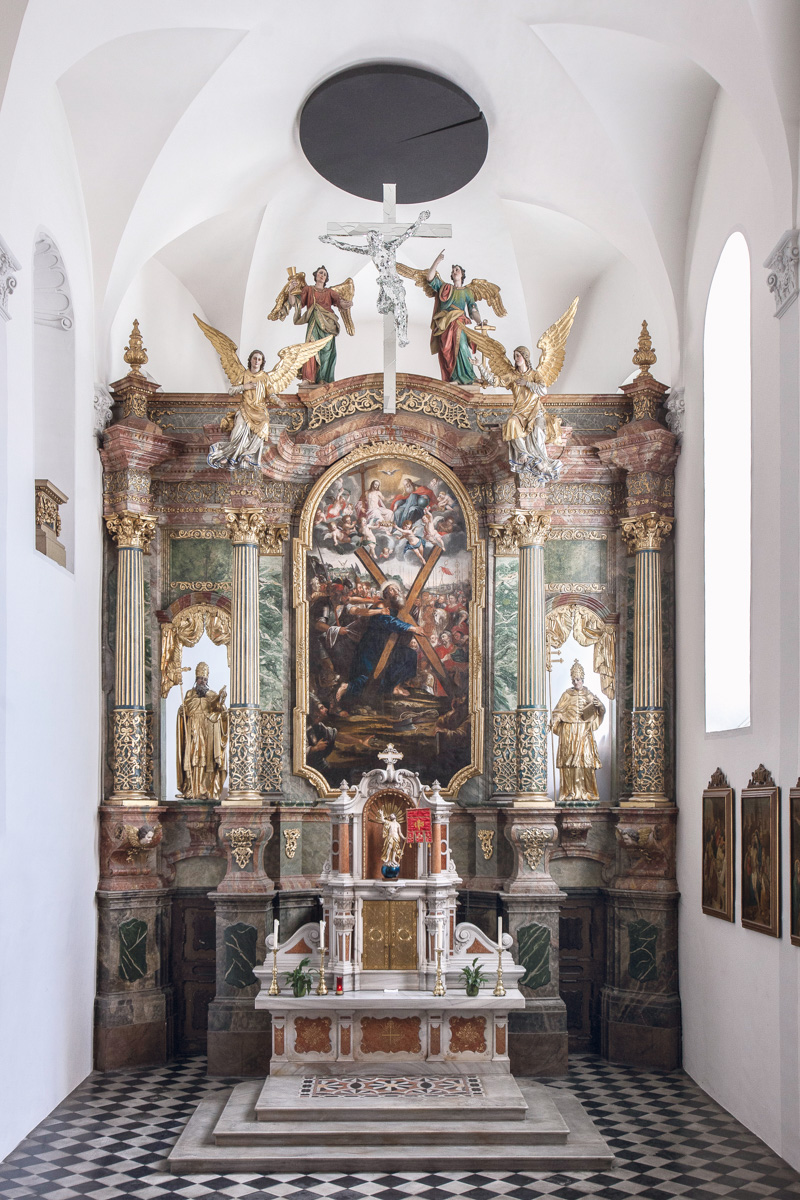 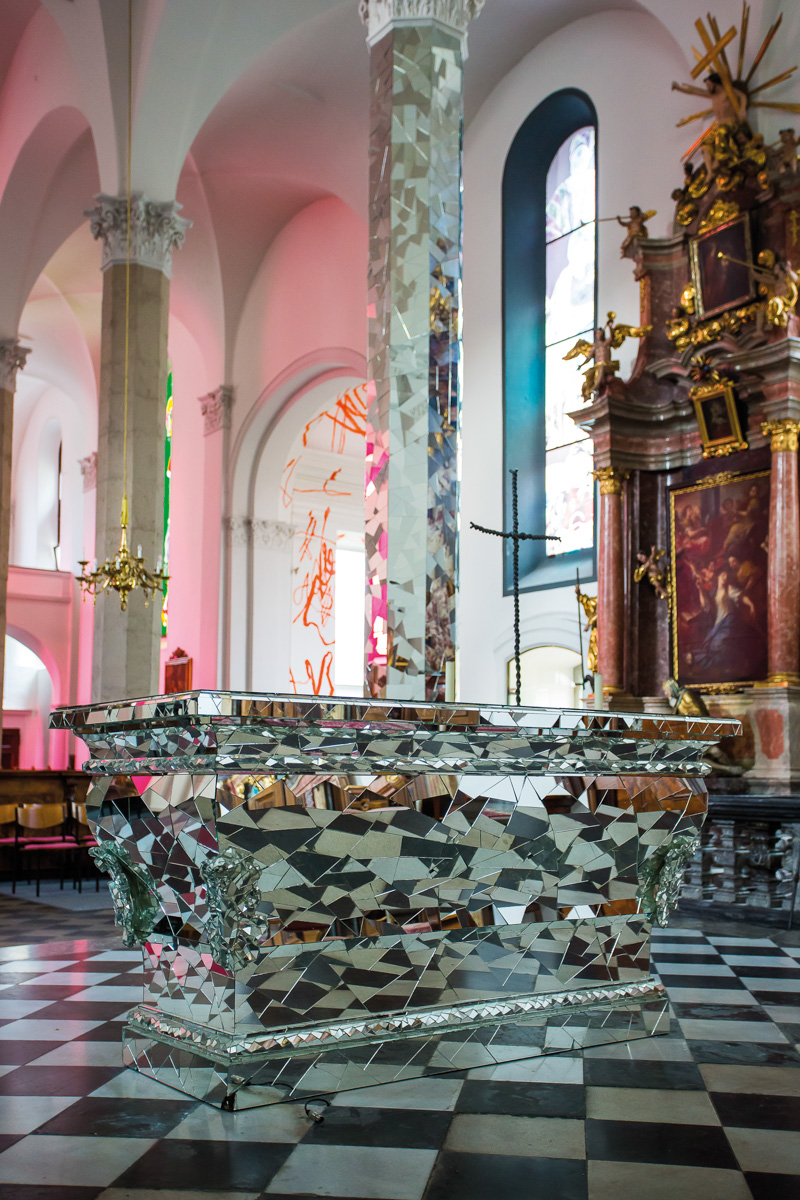 The Austrian artist Gustav Troger (*1951) has turned different objects into mirrors since 1997. He actually covered them with mirror shards that form a new outer skin of the objects. In this manner, Troger coated the altar and a supporting pillar in the nave of the St. Andrä Church in Graz in 2001, and many years later also a cross on the high altar (2014). In 2013, covering something with a crystalline skin of mirrors acquires a particular degree of intimacy in the case of a Baroque cross (beams and the body). The crystalline skin consisting of uncounted small mirror fragments dynamises the body of dead Christ; it imparts the aura of transfiguration to the suffering person. It is obviously about the disembodiment of the tortured body. The weight of death of the crucified is “suspended”. The natural light is refracted in the so-called “Mirror Christ” and makes the hidden glory of God light up. The dark disc over the mirror-covered crucifix (99allplepie, 2014) does not only provide formal closure to the altar ensemble in the St. Andrä Church but also stands for the incomprehensible and mysterious of both the universe and God’s reality itself. The altar in the centre from 2001 looks like a huge crystal, in which, depending on the light’s intensity, the entire church space is bundled, and refracted at the same time. The extensive use of mirror glass reminds of the Revelation of John, where the throne of God and God himself are described by means of precious crystals, and the following can be read: “And before the throne there was a sea of glass like unto crystal” (Revelation 4:6). In the way Gustav Troger uses it, the mirror turns into a medium of the transformation of objects, their dematerialisation, or “spiritualisation”. Inside and outside are merged in a multifaceted manner. With the mirror fragments, you can experience with your senses that all the people in the church are included into the altar. It bundles the multifaceted life of the multicultural parish community of St. Andrä; it mirrors its actual diversity. Generally speaking, the mirror symbolises the ideal and quite often also the idealised (dream) image of life. It stands for beauty and defacement. The mirror fragments also thematise actual failure (shards), the fragmentariness of life, and at the same time, its recovered wholeness, too. The column is the third element in the ensemble of the church space. The Holy Communion, which is centred on the altar, is visually comprehensibly integrated into the high church space in the vertical flow of light of the mirror column. Bread and wine are lifted up in the celebration of the Holy Communion, spiritually transformed, and received again “from above” as gifts of eternal life. Beside this contextual aspect, the formal one is also interesting. The column, an indispensably fundamental element of architecture, is visually “destabilised” by the coating with mirror pieces, and carried away from the space. But at the same time, it pushes back the obviously multifaceted refraction of light and colours into the perception of the viewer.