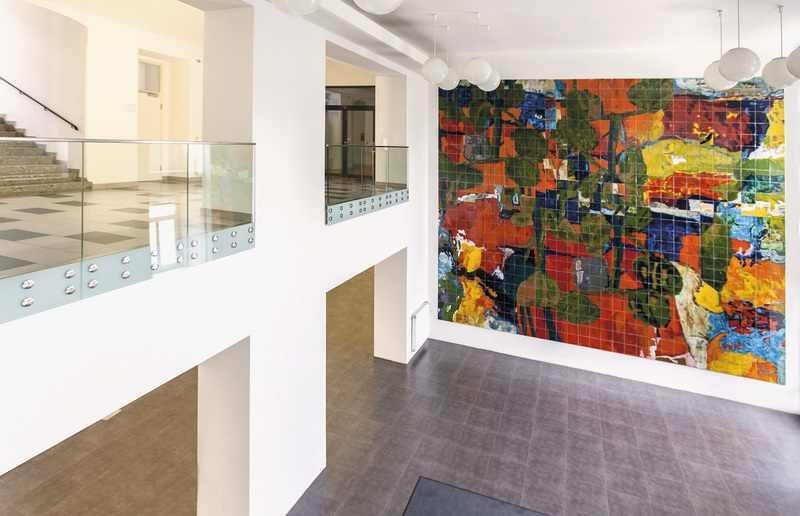 Can an artwork express the mission statement of an institution such as the Augustinum, the new “Episcopal Centre for Education and Vocation”, in a condensed manner? This was the initial question raised by Diocesan Bishop Egon Kapellari (2001–2015) when it came to the artistic redesign of the wall of the entrance foyer of the completely redesigned building that hosts different educational institutions of the diocese. Eventually he commissioned Luis Sammer (*1936), who was an art educator at the Episcopal Grammar School of Graz from 1964 to 1988 and had his studio there, and lastingly influenced generations of young adults. The abstracted meridional landscape that stretches over the entire wall was created in 1976, for the then newly built swimming bath of the Episcopal Seminary and Grammar School, which was removed in the course of reconstruction. In 2012, hence 36 years later, the then already 77-year-old artist developed the composition “– brannte nicht unser Herz –” from this. Luis Sammer also sees the title, which he borrowed from the biblical Emmaus story, as his artistic legacy for future generations being educated in the Augustinum; so that they “look for the burning heart, find it, or remember it”. Thus it also builds a bridge to the name giver of this institution, who is usually represented with the “burning heart”. Sammer’s original colour composition from the mid1970s was an important work in the category of “art on the construction site” of Styrian modernism in the late 20th century. Both the original and the current composition reveal this in an orgiastic symphony of colours composed by an organising spirit that stands “above the elements of fire, water, air, and earth as well as above the process of Creation” (L.S.). As an image of Creation, it lays bare its inner organising structure. The dynamics of the colour red brings vibrant life into the form, “joyful movement, a sign of the seething flux of inner events”; red is, says Sammer, also “an explosive colour which makes clear the dangers of the breakneck pace of life processes.” The experience of an expansively dynamic present, faith in the light of Easter, and the mission to contribute to Creation is a triad for Sammer that helps us to read this image. It is also the actual hermeneutical key to the readability of the entire work of this important Styrian painter and art educator.