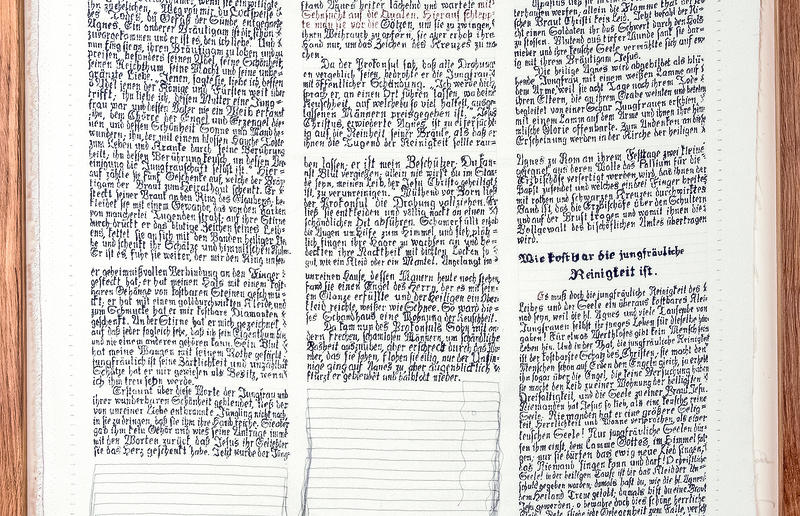 born in Volkersdorf, Austria, in 1954; lives and works in New York and Semriach, Austria. Priesch studied at the Academy of Fine Arts Vienna and was Max Weiler’s assistant. In 1983, he co-founded the artists’ group REM; in 2001, he founded “b-environments“. In recent years, he has examined political subjects and their intersections with religious worlds of faith. He received the Art Award of the Diocese of Graz-Seckau in 1985. Priesch’s works were shown in the KULTUM in the exhibitions “Hannes Priesch: ICH ALS MOSES ALS GOTTVATER“ (2006), “Gestures of Infinity“ (2007), “RELIQTE” (2010) and “IRREALIGIOUS! Parallelwelt Religion in der Kunst“ (2011/12).

Oh my God can be deciphered in Hannes Priesch’s scrawly-looking wall drawing: This exclamation of general consternation, which is popularly in social media, is both a commentary on the theme of the exhibition and a statement by the artist about his own work. The picture boxes arranged in a line are hand-painted biographies of saints associated with the first days of January in the Roman Catholic calendar. The original texts of this series, have been taken from the book Legende von den lieben Heiligen Gottes [Legend of the Beloved Saints of God] from 1854. The stories describe the ordeals of these mostly early Christian saints. However, the nuances of the 19th century language emphasise the cruel ways and means of letting oneself be tortured. The texts deal with the willingness to make individual sacrifices for the collective, for a community of believers. Whether this is an example of misunderstood, militant faith, which God must endure in serenity (a divine humour?), remains open. Priesch meticulously copies the legends of the saints and transfers them onto textiles. Thus, this series also joins other “writing images” created by this artist, in which he adds a special aura to the respective medium of the written texts (of a book or an e-mail). Without submitting himself to martyrdom, the artist undergoes a time-consuming, painting ritual through the process of copying, which is also an act of appropriation. Nevertheless, the little reliquary-like gifts, which consist of hair, a piece of painted cloth, or blood vials, are his own: Oh my God!