Emmaus an der Weinstraße | Emmaus on the Wine Route 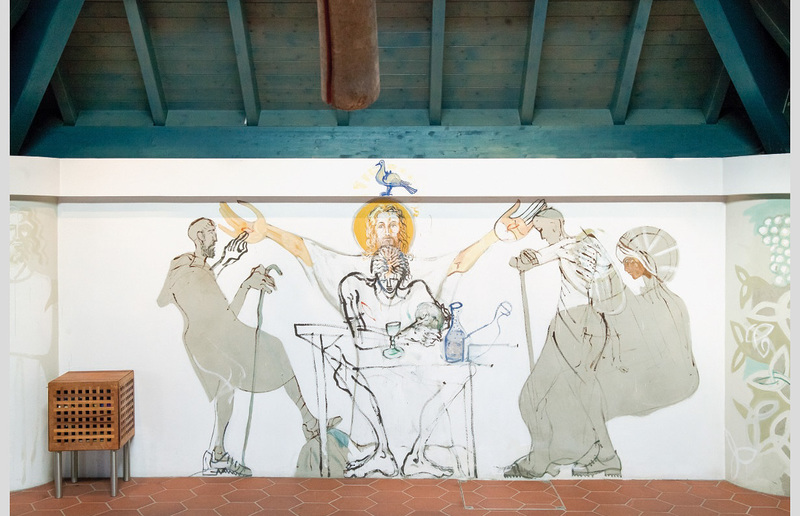 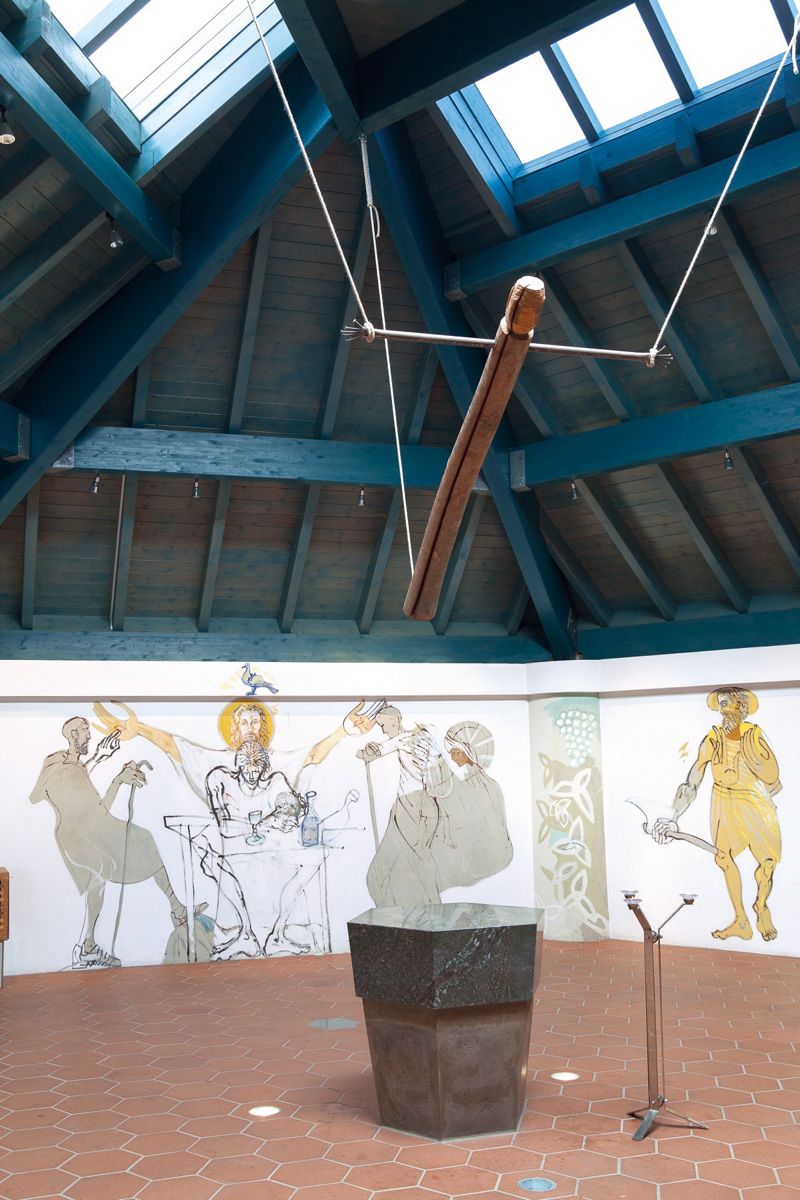 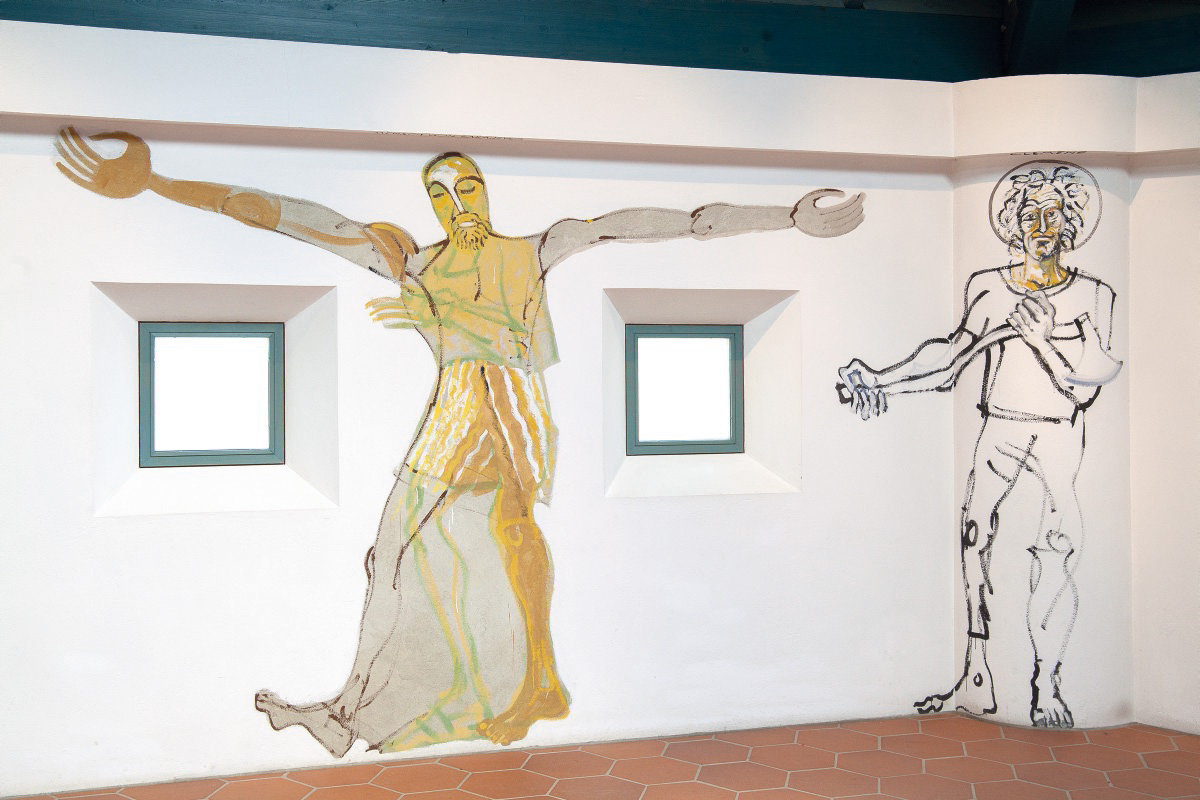 Emmaus on the Wine Route

The local population of Wernersdorf has wished for a sacral centre in the centre of the village for tens of years. In the frame of designing the new village centre, a chapel for the Holy Mass too was planned by Dieter Spielhofer in 1989. The Brettschuh couple from Arnfels was commissioned to provide the artistic design following a competition and the jury’s decision. The architect Christiane Brettschuh (*1949) designed the hexagonal altar made of eclogite from the mountains of the Koralpe. The cross spanned over the altar made of a split and thus “wounded” trunk of a tree, penetrated by a steel rod, is a work created by Gerald Brettschuh (*1941). He also painted the pictures on the walls of the hexagonal chapel room with its open tent-like truss. They show a large number of saints in Brettschuh’s original, vernacular, and expressive drawing and painting style. As model images of the Christian world, they are not raptured from Earth but are gathered around the altar life-sized and freely moving. The faces bear the features of real living people. Saint Cecilia, the patroness of musicians, is a violinist from Vienna, the parish priest of Wies is carrying baby Jesus as Saint Christopher, and the facial features of the artist can be spotted in the at the same time doubtful and faithful Thomas as well as in the prophetic figure of St John the Baptist. Others—Joseph, Clement, Hubert, Leonard, George or drunk Urban—are lumberjacks, hunters, and farmers from the surrounding area. Only Saint Nicholas corresponds to our imagination from childhood. Yet, what is unusual is the “Man from Sarajevo”, an admonishing figure of a saint that makes the question “Who is my neighbour?” highly topical. Eve, the first mother, is unorthodoxly depicted as a young erotic woman who dreams of love. The front side is dedicated to the Emmaus events but it is overlapped and pervaded by other images. At the side, the two disciples are standing; they have met a stranger on their way to Emmaus and invited him for a meal. They did not know that Jesus, the risen one, had walked all the way with them and explained the meaning of the scripture to them. Like hikers from the Koralm mountains, they are standing in front of the table beside the seated guest, a goblet and a bottle of red wine in front of him. The mysterious but still so real guest does what is only due to the host: He says the blessing over the bread and breaks it, like Jesus in the Last Supper. In this moment, their eyes were opened and the lanky figure of the stranger transforms into the colourfully luminous figure of risen Christ, who presents his transfixed stigmata with arms wide open. To the left, the disciple transforms into Thomas: He cannot believe it until he has put his finger into the wound of Jesus. A baby Jesus is hidden on the back bag of the right-hand disciple, which all Christians “carry with them”, with the mission of baptism to make it visible. But the child is also a part of Mary, who appears seated “behind” it. Her simple “being there” is as mysterious as the way she conceived the child. A dove is sitting on the truss as a symbol of the Holy Spirit and the work of God like the confirmation of the inexplicable events and starting point of the work.