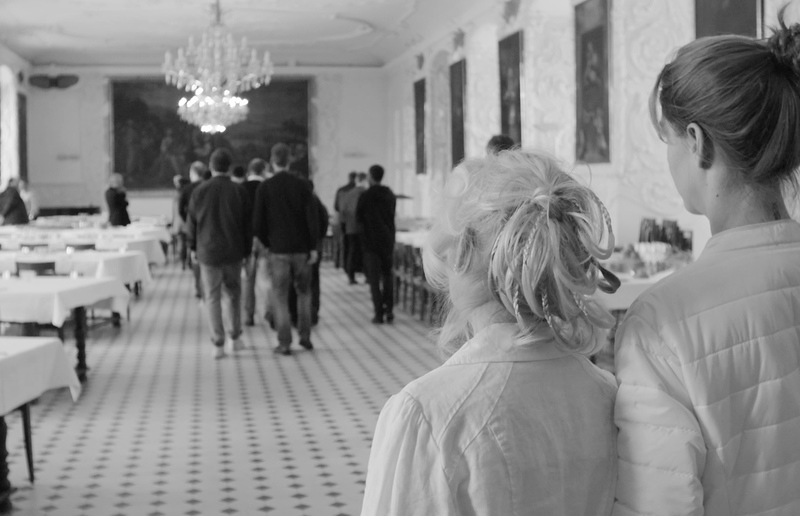 Markus Muntean was born in Graz in 1962. Adi Rosenblum was born in Haifa, Israel, in the same year. They have collaborated as Muntean/Rosenblum since 1992 and have held lectureships at the Academy of Fine Arts Vienna since 2000. They received the Art Award of the Diocese of Graz-Seckau in 1999. Their works were presented i.a. at the Mucsarnok (Kunsthalle Budapest), in the Essl Museum, MAK Vienna, Tate Britain, London, and De Appel Museum, Amsterdam. Muntean/Rosenblum’s works were shown in the KULTUM in the exhibitions “Muntean/Rosenblum: Jugendkultur und eine Metaphorik des Lebens“ (2000), “RELIQTE“ (2010) and „IRREALIGIOUS! Parallelwelt Religion in der Kunst“ (2011/12).

The inspiration for the film made in the Grazer Priesterseminar by the duo Mun-tean/Rosenblum, who have been working together since 1992, is an American television series entitled The Leftovers. This story begins three years after the sudden, inexplicable disappearance of three percent of the world’s population. While searching for the cause, more and more people turn away from the parish priest and instead join the sect “The Guilty Who Remain”. This serves as a “living reminder” to those who try to forget the day of disappearance. The members leave their families, communicate only by writing, dress uniformly in white and attract attention by their excessive cigarette consumption.The end of the world, guilt, representation, blame, penitence, purity, vows of silence, pain, purgatory and hell—the TV series and Muntean/Rosenblum draw from a Christian repertoire. As in their paintings and drawings, the artists take advantage of the fact that religious motifs, gestures, poses and compositions have long since found their way into advertising, social media, film and TV series. On the basis of these media and popular cultural transformations, and with the help of formulaic gestures of emotion and a showcased inwardness, Muntean/Rosenblum manage to create the psychogram of a community whose sterile, empty expression of emotion seems to reveal their phantom-like, insecure existences.