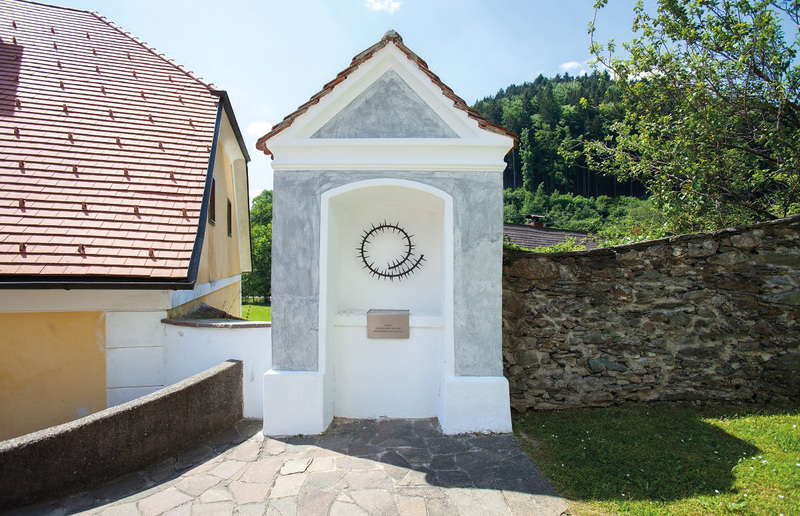 Last words have a special weight—in discussions, in controversies, and in contract conclusions— and especially before dying. It is the last gestures, and the perhaps only whispered words that are particularly memorable and have a lasting effect. Some sentences have been handed down in the texts of the Gospel that Jesus is said to have spoken before dying on the cross. The theological tradition has subsumed them with the number seven, which combines material (four) and spiritual or divine (three) things. They are said to be the legacy and the last instruction of Christ to his disciples at the same time, and as words of interpretation of the events of the cross. Down to the present day, composers have been inspired time and again by this biblical subject matter to write musical works. At least in the Germanspeaking world, the “Path of Last Words” in east Styrian Arzberg might be an examination of this subject in visual art that has been one-of-a-kind to date. Representatives of the Arzberg parish actually intended to create contemporary Stations of the Cross following the tradition of the Calvaries, which had their heyday in Styria in the Baroque period, near their church as a station on the pilgrim’s path to Mariazell. But the artist Fritz Panzer (*1945), who was commissioned with the conception, turned to the last words of Jesus on the cross as handed-down in the Bible after he had examined the requirements of the terrain, to which he added a word of Jesus from the Gospel of Matthew. Panzer interprets the words associatively, seconds them with deliberately reduced artistic symbols which open them up for personal meditation and spiritual contemplation. That only readiness to reconciliation and forgiveness can break the cycle of violence seems to be visualised by the hint of a crown of thorns in the historical shrine of the so-called Initienkapelle at the former cemetery wall while a metal cross in a state of precarious balance on the way from the chapel of rest to the cemetery thematises asking existential questions as a basic element of human being—with delivering the always available security of an answer. The artist intensifies the impressive vista over a narrow valley with a cross broken through by a tree of life and opens up a new perspective at the end of the path, at the highest point, which clears the view back to the beginning, with a sentence from the Gospel of Matthew formulated out of the belief in resurrection with which he accompanies the seven words: “And lo, I am with you always, even to the end of the age.”—Again it is a cross that bears the letters of this sentence, and thus leaves the answer and the question in a mutual and not solvable connection and relatedness.