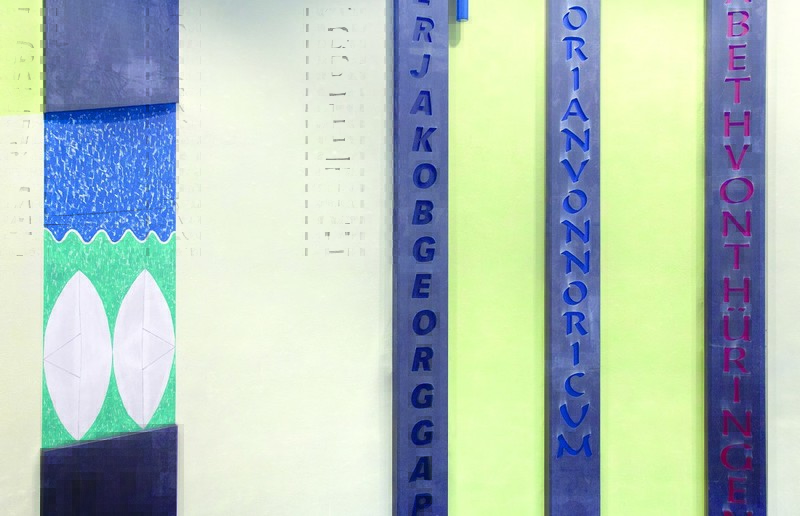 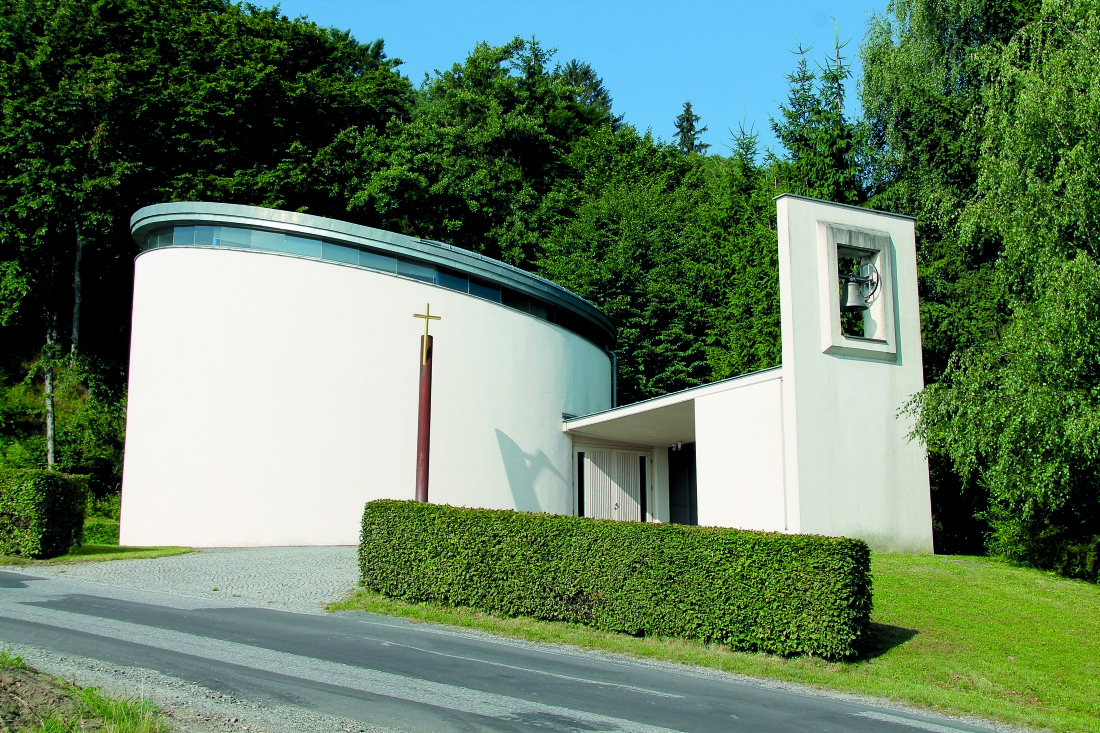 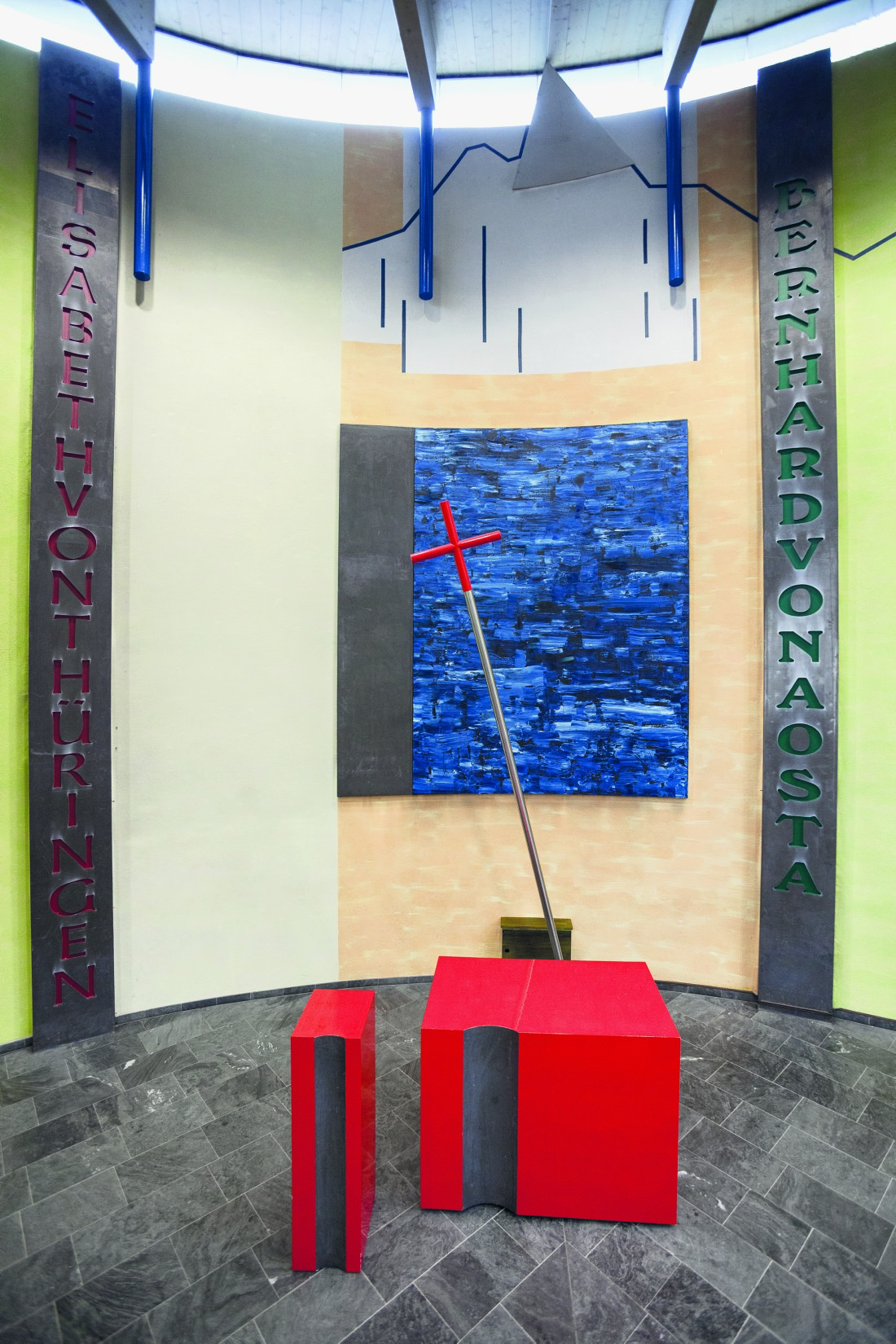 The village chapel of Penzendorf (Penzo = Bernard) is located at the foot of the Ringkogel, outside the village. Saint Bernard of Aosta, who built a mountain hostel for travellers and pilgrims on the Great Saint Bernard Pass in Switzerland and is thus venerated as the patron saint of the Alpine population and mountaineers, is its patron saint. The chapel built by the architect August Kremnitzer (*1931) appears closed like a tower. It is a white cylindrical building structure with a steeply rising round pent roof on top of a surrounding line of windows. Towards the village, the bell-gable rises as a narrow, towering slice of a wall to which a small sacristy space is added und which is connected to the chapel by a low-ceilinged atrium. A small gold-plated cross on a slanted rusty steel tube stands in the way of the visitors as a signum. Hans Jandl’s (*1958) artistic spatial intervention into the interior space forms a counterpoint to the formal clarity and whiteness of the building’s exterior. Vertical fields in striking colours structure the space, interrupted by a wall-high window opening at the hillside. The altarpiece composed of the pastose application of blue, black and grey reminds of a vibrant water surface and attracts the view “into the distance of the infinity of the spirit” (Jandl). There is a crosier in front of it, the cross end blood-red on top of the stainless steel staff, superhumanly big and in a slanting position. In this way, Jandl wants to show Christ’s care for us humans, but also to thwart our ideas of successful life in wealth. Thus, the block-shaped altar and the ambo are blood-red, like the attached cross. Both show a vertical round recess that is lined with sheet lead. Four narrow ceiling-high panels of both flexible and heavy, harmful and protective sheet lead structure the altar wall. These are plaques commemorative of the patron saints of the chapel, whose names are written in capital letters in different fonts. Elizabeth of Hungary—for work of charity—, Florian—against the dangers of fire and water—, and Father Jakob Gapp, who was beatified in the year the chapel was consecrated and executed by the Nazis for his Christian attitude towards life in 1943, are mentioned on the three plaques to the left. The stele to the right, from which the contour line of the Valais Alps rises towards the altar wall, is assigned to Bernard of Aosta. A broader lead panel frames a late-Baroque figure of Immaculate Mary standing on layered glass panels. Further decoration elements created by Jandl are two painted paper boats—standing vertically and symbols of partnership—and three oversized, horizontally installed sheet lead dots which refer to love, communion und communication, and to the “mystery of the ungraspable”. Eventually, there are the delicate lines of a dove of the Holy Spirit over the entrance, with Jandl’s plain signature at the bottom. The chapel of Penzendorf places a contemporary emphasis of high artistic spiritual quality right in the middle of East Styria.