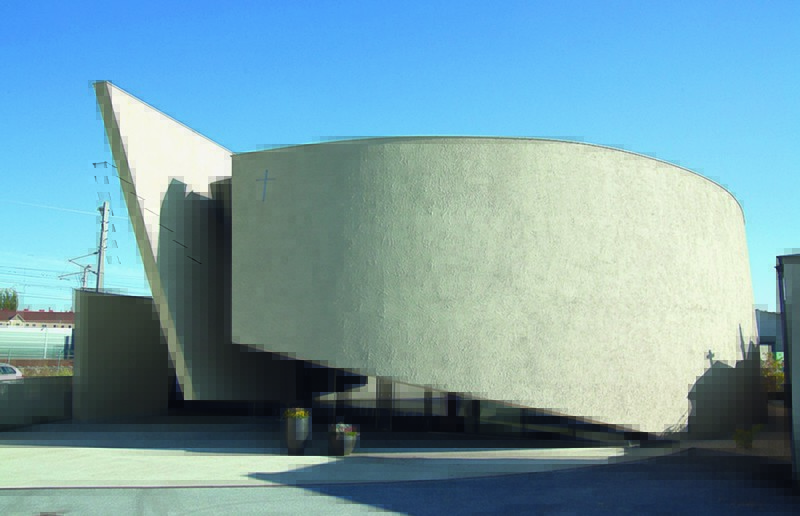 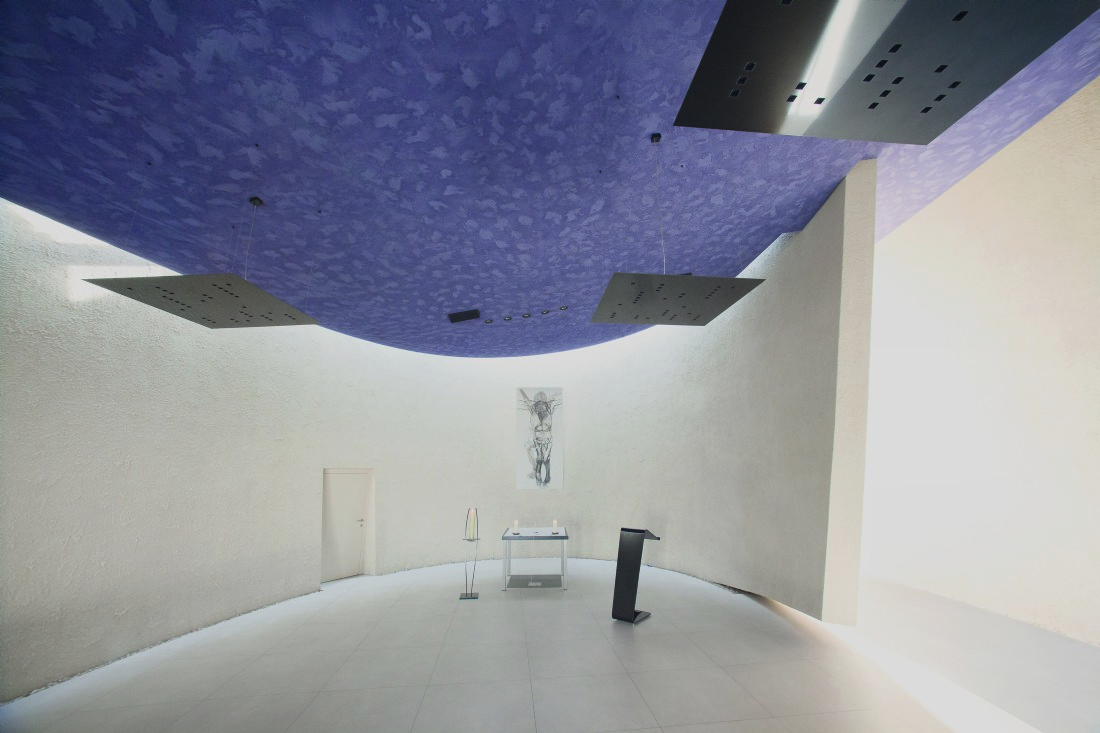 The Focal Point of Life

“Father, into your hands I commit my spirit“— this is the sentence from the New Testament (Luke 23:46) on which the planning team of architects, Hofrichter-Ritter and Ritter, based the organic structure of the funeral hall on the Steinfeld Cemetery in Graz, which was completed in 2013. The masonry shells of the building are carefully laid around the windowless space, which is illuminated from above with gently scattered light, like two hands. It was some time after the building’s completion that Franz Yang-Mocˇnik’s image found its place on the front wall of the hall, as it was originally supposed to remain empty. Initially created without being commissioned by the Church, the work nevertheless symbiotically unites with the spatial structure, the entrance of which centrally leads towards the wall, while the side exit directly opens to the cemetery, and defines the space as a sheltering station of pause on a way that leads beyond our existence. An obviously suffering and maltreated figure now bundles the lines of sight in the central axis behind the coffin and the altar. A searching gesture is inherent in the subtle lines, which give proof of the interest in Eastern calligraphy of the artist—as a wanderer between the cultures—, who was born in Völkermarkt in 1951. Several images seem to be laid on top of each other—like sketches for a virtual film. Inspired by scenes from Pier Paolo Pasolini’s epoch-making “The Gospel According to St. Matthew” (“Il Vangelo secondo Matteo”), Franz Yang-Mocˇnik is mainly interested in the human aspect of the Son of God. For him, Jesus Christ is the human being as such. Two figures seem to merge on an already processed ground, but can still be interpreted as independent ones. There is gentle movement in the picture. A face with transfigured eyes can be seen behind a head that is hanging down lifelessly. The distorted motion of the intertwined legs seems to struggle against gravity and the downward pull; the arms of the figure in the background are raised upward—or are they only held up by the nails? Ultimately, the events of Golgotha—death and its possible overcoming—remain an unfathomable mystery. The irreversibility of the limitedness of life on Earth and the question for the reason of suffering and pain are depicted as well as the trace of hope for a possible hereafter, which is given a celestial fundament by the natural light falling in from above. At a place of mourning and farewell where details are perceived more intensely than anywhere else, the artistic design tries not to ignore suffering and pain, or to whitewash it superficially, but to hold the question of life and eternity in the face of death and perishability in suspense, and to open up a future.