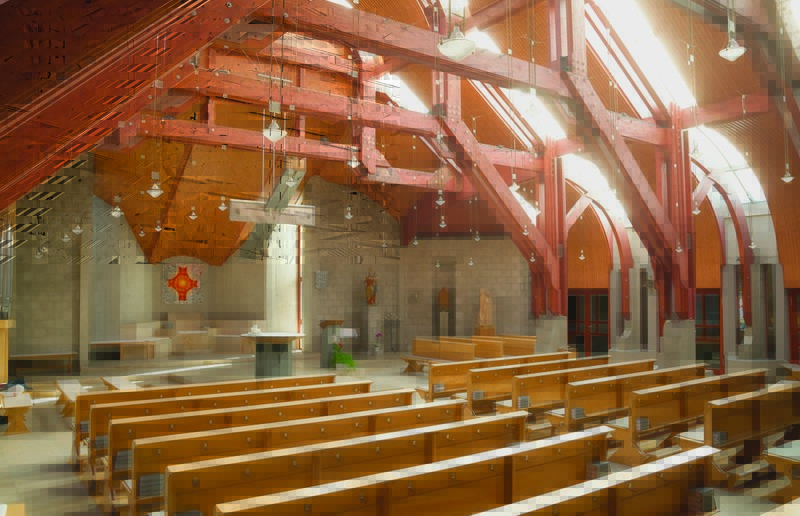 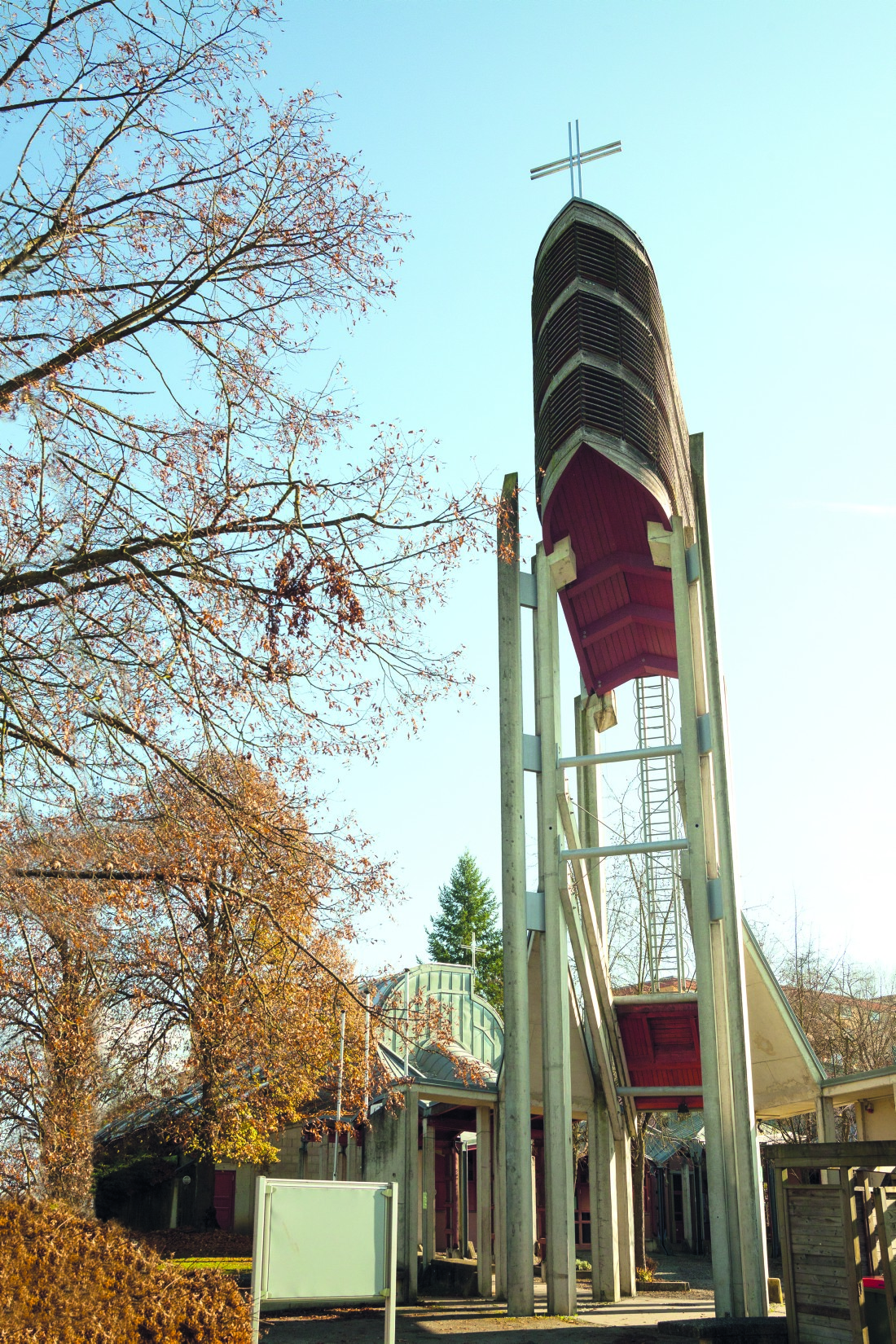 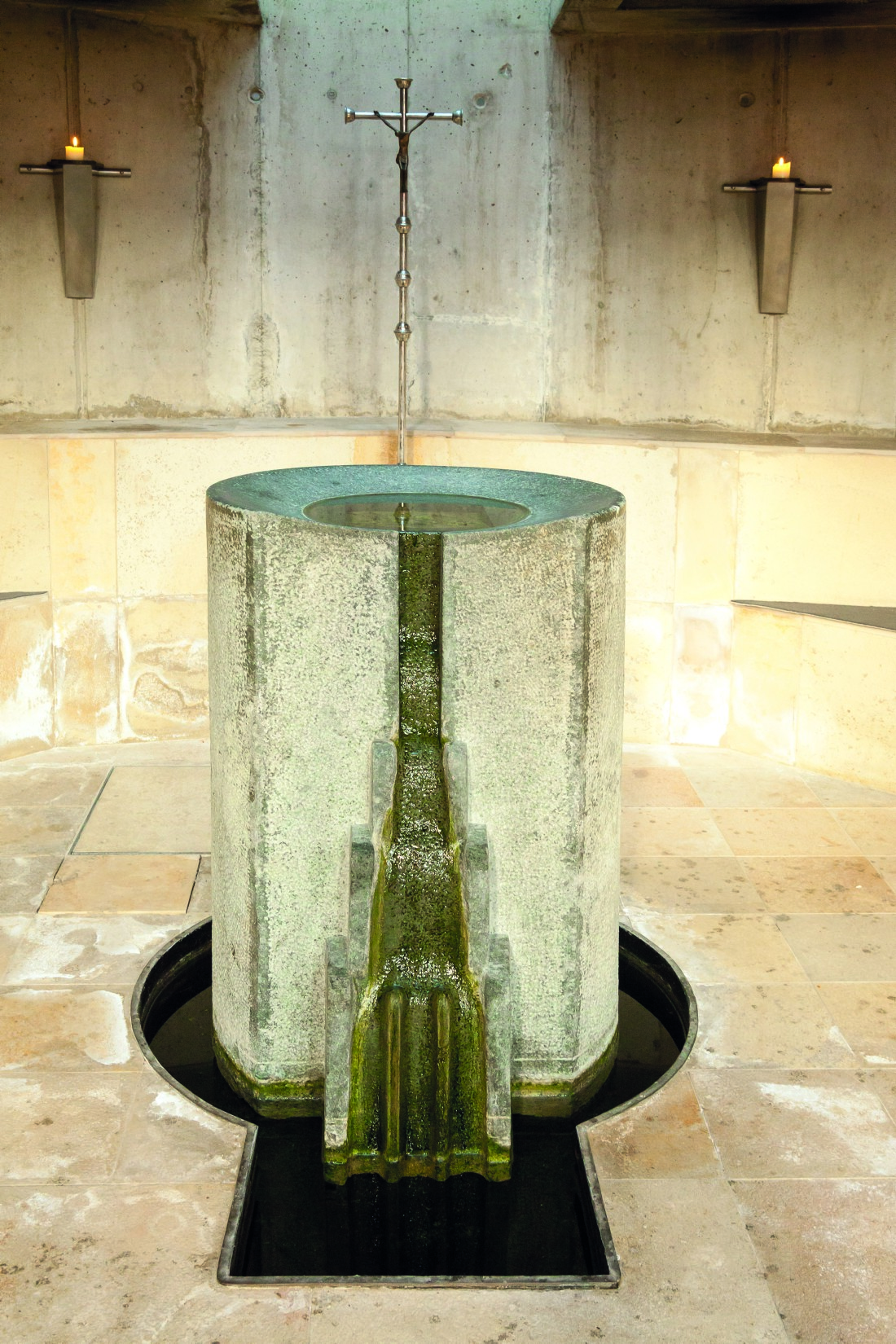 Grown awareness of the community, openness to the world, and environmental responsibility, as well as the objective of social inclusion in a new urban environment demanded a new home after ten years of accommodation in a provisional space for celebrating the Holy Mass. Thus, in 1981, a competition for building a church with a parish house was tendered for the parish of Berliner Ring, which had been established in 1974 for the pastoral care of this new urban area in Graz. From the 24 submitted projects, the one by Michael Szyszkowitz (*1947) and Karla Kowalski (*1941) was eventually selected. The new building was realised within three years. The bold concept groups the church, the community house and the nursery school around an irregular open square, which is surrounded by a cloister-like arcade. What was actually realised of the overall concept were the courtyard, the church, and the so-called “Haus der Begegnung“ (House of Encounter). A towering bell-gable in the northwest corner marks the entrance to the atrium-like courtyard. Free-standing concrete columns bear a belfry which is painted red and rears up like a bow—the nave of the church under the sign of the cross. On the west side, separated from the street by an earth mound, there is the parish church with its vibrating roof construction made of sheet zinc and glass. “Like on a big pangolin, the huge metal envelope of the roof cover over the building turns into an own body of forms, and dominates the thin support profiles peeping out below it.” (Szyszkowitz ) The profile of the entrance facade reminds of the silhouette of a human figure with head and shoulders and indicates some kind of basilica-like interior space with three naves. Strong pedestals made of exposed concrete with surrounding benches bear wooden beams scumbled red, which ramify into a wooden bearing structure that consists of many parts. The image of trees unfolding in their branches is obvious, and it refers to the life of the active parish community and this church as a sacred space where growing and maturing are possible. Bearing and weighing parts of the truss, ribbons of acrylic glass and curved plywood surfaces fit together to form a stepped and vaulted ceiling construction. This colourful and apparently vegetal wood architecture is contrasted by the cast concrete east wall with the apse. The altar, which has been designed by Josef Viehauser (*1940), stands in a central position in front of it. It consists of a slim stone support holding a bowl-shaped mensa. A metal cross with five branded stigmata, which was designed by Tomas Hoke (*1958), floats above it, slanted and space-consuming. A low-ceilinged baptistry bulges from the north wall. Inspired by the fountain vision of St. Nicholas of Flüe, the patron saint of the church, water constantly flows over the stone. The Swiss national saint known as “Brother Klaus” did not only see the vision of a divine fountain from which the clearest water permanently streams out, but also became himself a fountain of peace and unity for the people due to his mystical connection to God. This significant new church building from the 1980s, which is with regard to both urban design and architecture an unusual church building project, is characterised by openness and wideness with simultaneous reassurance and delicateness.