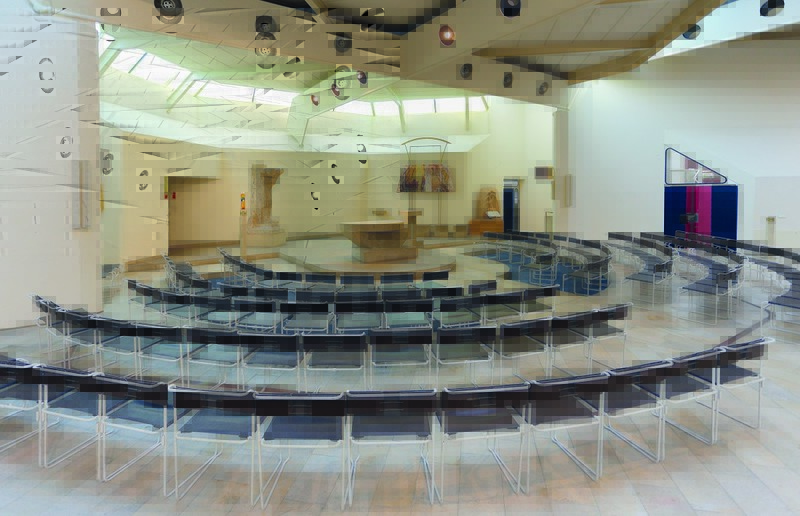 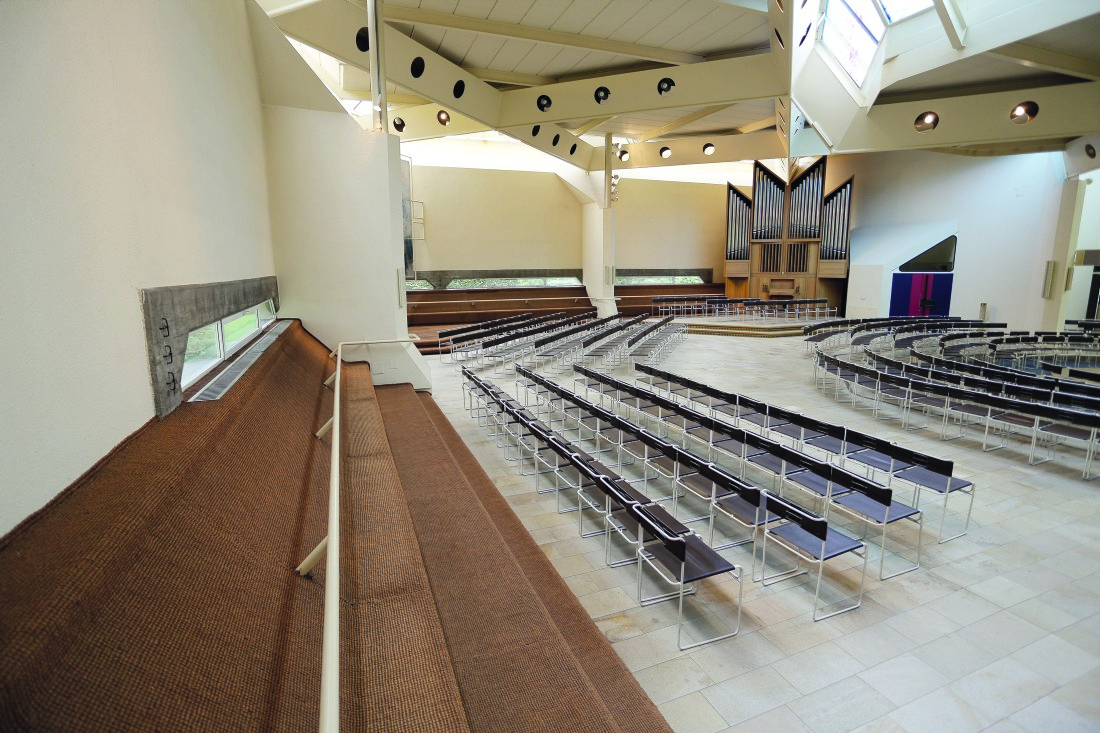 Increasing settlement activities in the 1960s led to rapid increase in population in the city area of Graz between the Liebenau Stadium and Kasernstraße. Thus, for the pastoral care in this area, the Holy Mass was celebrated in the break hall of a school. With regard to the planned church building, the population advocated the construction of a “house for the people of God” in 1971, which was supposed to stand out from the surrounding high-rise buildings as a pastoral centre. The pastoral care centre designed by the architects’ duo Wolfgang Kapfhammer (*1938) and Johannes Wegan (1939–2007) is composed of three building complexes: the church with the parish hall, the rectory and the nursery school grouped around a forecourt. A low assembly of buildings radiating reassurance was set as a counterpoint to the urge for altitude of the tower blocks. Moreover, they did without a steeple as a distinctive mark; it was added later though, in 1994. The complex floor plan concept was composed of squares with slanted corners, which are diagonally nested into each other. The diagonally aligned church space, which one enters from behind via side annexes, is the largest square. The altar zone presents itself niche-like, almost apse-like, its altar island reaching into the space in a semicircle. The tubular steel seats of the congregation are aligned towards it also in a semicircle. An altar sculpture created by Gernot Völkl forms the centre of the altar zone. Strictly geometrically shaped, he establishes a “point of intensity that brings contemplation” (Völkl). He also designs the ambo based on this idea of concentration (realisation by Pillhofer). The stone sculpture of crucified Christ in the sanctuary is a work created by Josef Pillhofer: Reduced to the torso, abstracted, without arms and cross, Christ is a condensed invitation to the viewer to perceive his real presence. The large painting “Herrlichkeit” (Magnificence) full of cosmic spiral nebulae, which was created by Edith Temmel, is replaced by “Kreuz” (The Cross) by Alois Krenn in the Lent period; both paintings were created on the occasion of the Katholikentag 1983. In line with the discourse of the time, this church is variable with regard to the possible space utilisation. In 1971, a church was consecrated with Saint Paul in GrazWaltendorf, the exclusive sacral space of which was a chapel with an adjoining multifunctional space: On Sunday, this multifunctional space was a church while it also was a space for meetings, talks, and concerts during the week (a concept that was abandoned very quickly). All follow-up projects have clearly defined churches as sacral spaces, thus Graz-Süd too. However, about two thirds of the space can be separated by means of sliding walls in the back so that an octagonal “chapel” remains around the altar zone. Thus, the church can be turned into a mundane meeting space for large events or parish feasts. What has been created is a space that can serve several purposes—but is deliberately not used for every conceivable purpose—and the core area of which always remains a sacred place—hence a church.