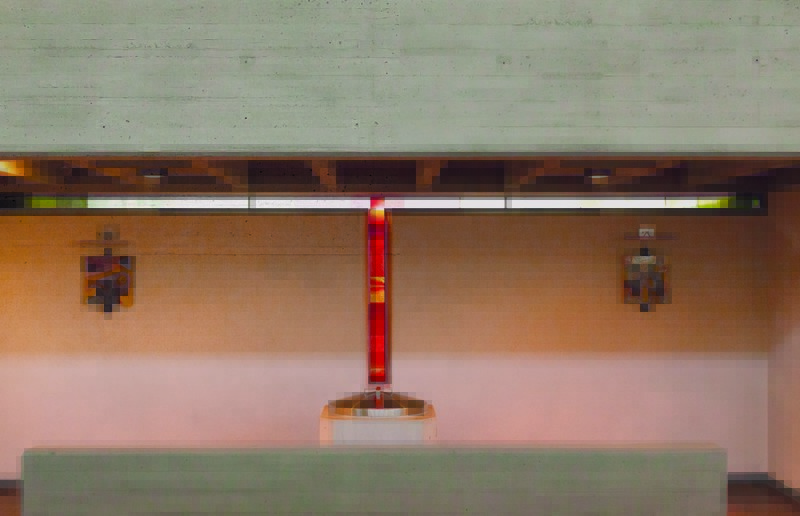 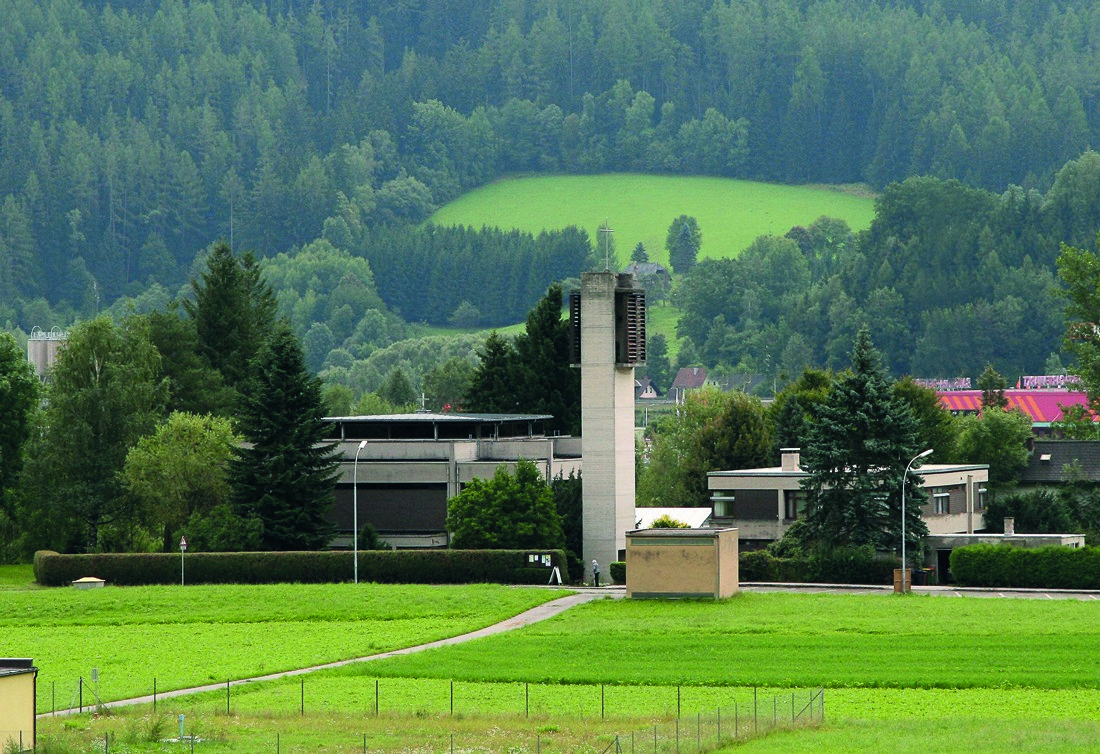 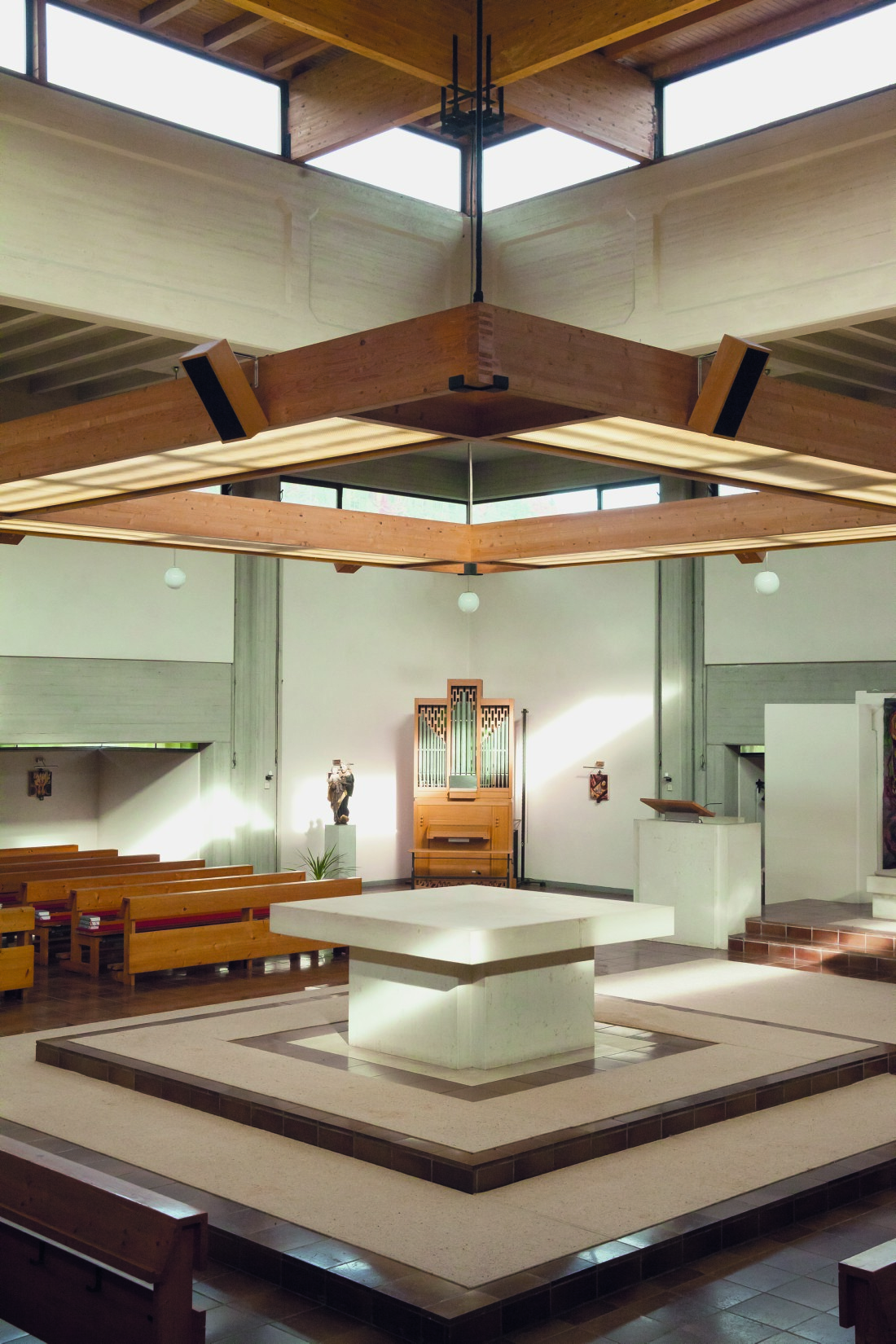 The Centre is Decisive

In his theoretical examination and actual building activity, Ferdinand Schuster (1920–1972) is one of the most important Styrian church builders of the 20th century. He planned two Catholic and two Protestant churches (Kapfenberg, Graz-Liebenau). As an architect, his consistent examination of the reform of the liturgy brought about by the Second Vatican Council led him from the traditional nave structure (Kapfenberg-Maria Königin, 1957) to the central space (Kapfenberg, Hl. Familie, 1962, Leoben-Hinterberg, 1967, and Graz-St. Paul, 1970). The claim of the Second Vatican Council for the “altar as the centre of the congregation celebrating the Holy Mass” is what he realised for the first time in Leoben-Hinterberg. This church space, which has remained unchanged down to the present day, is the clearest architectural realisation of the Council of all Styrian parish churches. The parish centre consists of the church, the atrium, the rectory (1971), and the high bell-gable. The supporting elements of the church are made of exposed concrete. A flat ceiling bears down on eight cross-shaped pillars, which is elevated like a lantern by a wide ribbon of windows above the crossing. Low-ceilinged annexes are added to the four sides—the sacristy in the east, the baptistry in the west—so that the ground plan of a Greek cross is the result. Detached from the bearing elements, the walls are clad with brown tiles outside, and plastered white inside. Both spatially and liturgically, the square altar of white marble stands elevated on a stepped structure in the centre. The light falling in from above enhances its central position and makes it the radiating centre of the congregation celebrating the Holy Mass. The pulpit-like ambo and the tabernacle are located in front of the altar wall with a two-part tapestry work created by Rudolf Szyszkowitz (the Angel of the Day and the Angel of the Night), which pushes into the space like a shell. The wooden pews aligned to the centre surround the altar zone on the remaining three sides. The narrow vertical slit windows of the annexes are unobtrusive, and distinctive precisely through their unobtrusiveness. Here, the painter Mario Decleva (1930–1979) placed an unobtrusive but nevertheless striking accent of coloured light. The quality of the window design in terms of form and colour takes particular effect in the baptistry on the entrance side of the church, which is located on a lower level and has a cylindrical baptismal font at its centre. A deep red vertical and a horizontal colour ribbon draw a large tau cross into the space, and thus creates a connection between up there and down here, between us humans and the Spirit of God. The clear and rational spatial concept by Ferdinand Schuster and the serious implementation of the rediscovered Catholic understanding of celebrating the Holy Mass expressed therein, are what is still impressive in the church of Leoben-Hinterberg today.