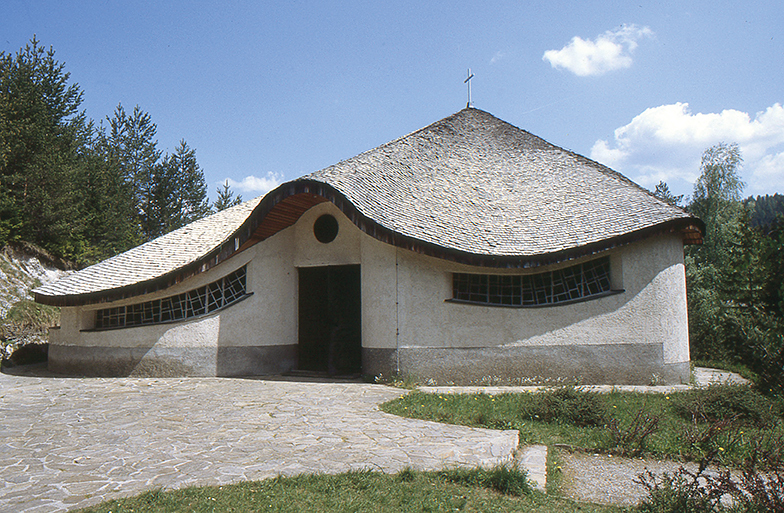 At first sight, one instinctively asks for the meaning of such a markedly modern sanctuary in the midst of remote woodland. Is it only a place of congregation for the Holy Mass? Is it supposed to invite us to stay and contemplate? Do we need this real symbol of a silent presence of God in our nervous time? Do we need this place, which is dedicated to a mystic who brought asceticism and politics into an interesting symbiosis? Complying with what the population had wanted for many years, a place of pastoral care was built in the remote Walster area on the banks of the Hubertus Lake from 1966 to 1967. St. Nicholas of Flüe (1417–1487), who was canonised in 1947, was chosen as the patron saint of the church. The Graz-based architect Eberhard Jäger (1921–2009) was commissioned to build the church. Starting from an at first polygonal sketch—orientated towards the Gottscheer Memorial Chapel in Graz—an organic building structure on a curved, almost elliptical ground plan was built. The rising walls with a curved timber shingle roof which is open to the inside reach their highest altitude above the stone-clad altar wall. Two large-format concrete glass windows reinforce the axial orientation of the space. Like the narrow cross-rectangular and ornamentally designed windows of the Way of the Cross, they were designed by Rudolf Szyszkowitz (1905–1976, an important representative of Styrian modernism. The glass windows in Walster—produced in the glass painting workshop of Schlierbach Abbey— are dedicated to the church patron. The left-hand window shows “Brother Klaus” in the centre, as a standing bearded man in the hair shirt with a rosary. His hermit existence becomes evident in the abstracted nature around him. Mary as the Queen of Heaven and Earth with baby Jesus is floating above it in a medallion. In its style, it reminds of the Statue of Grace in the pilgrimage church of Mariazell. The right-hand window shows crucial situations in the life of the Swiss national saint, who became an apostle of peace and unity for the entire country in his radical succession of Christ. The ploughing angel shows his origin and work as a farmer. His occupations as a soldier, councilman, and judge resonate in the Angel of Justice with sword and balance scales. The floating angel with communion cup and host refers to his strict hermitage. Legend has it that Saint Nicholas of Flüe did not eat anything for twenty years apart from the bread of the Holy Communion. Szyszkowitz presents the saint and the stages in his life with bright and luminous shades, expressive and abstracted forms, which are partly influenced by cubism, and strong contour lines. Thus, he makes the life into one of the most fascinating saints of the early modern period shine. What is also remarkable about this church is the two-winged cast-iron portal. Using a negative technique, Alexander Silveri (1910–1986) expressed four pictorial themes in a visionary manner: the table of the friends of Jesus, the prison of worldly tribulations, Mary with child as the mother of Mariazell with stranded Eve, and the door of grace of Mariazell “as a downward and an upward door” (Silveri).