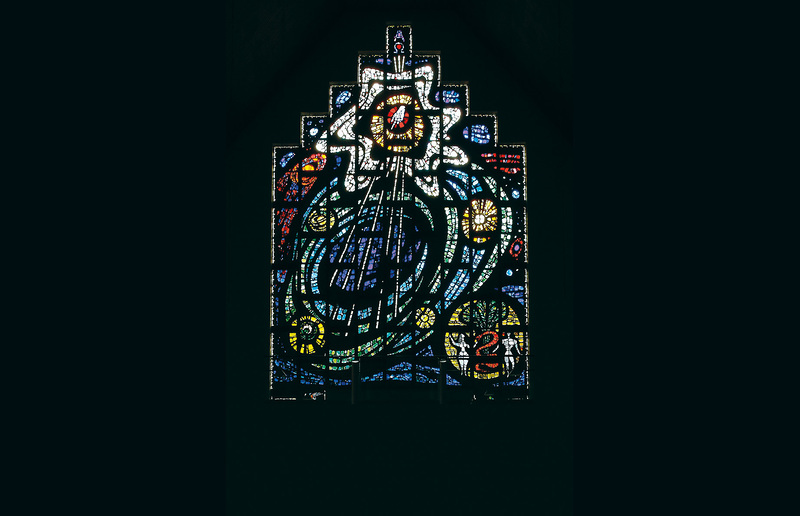 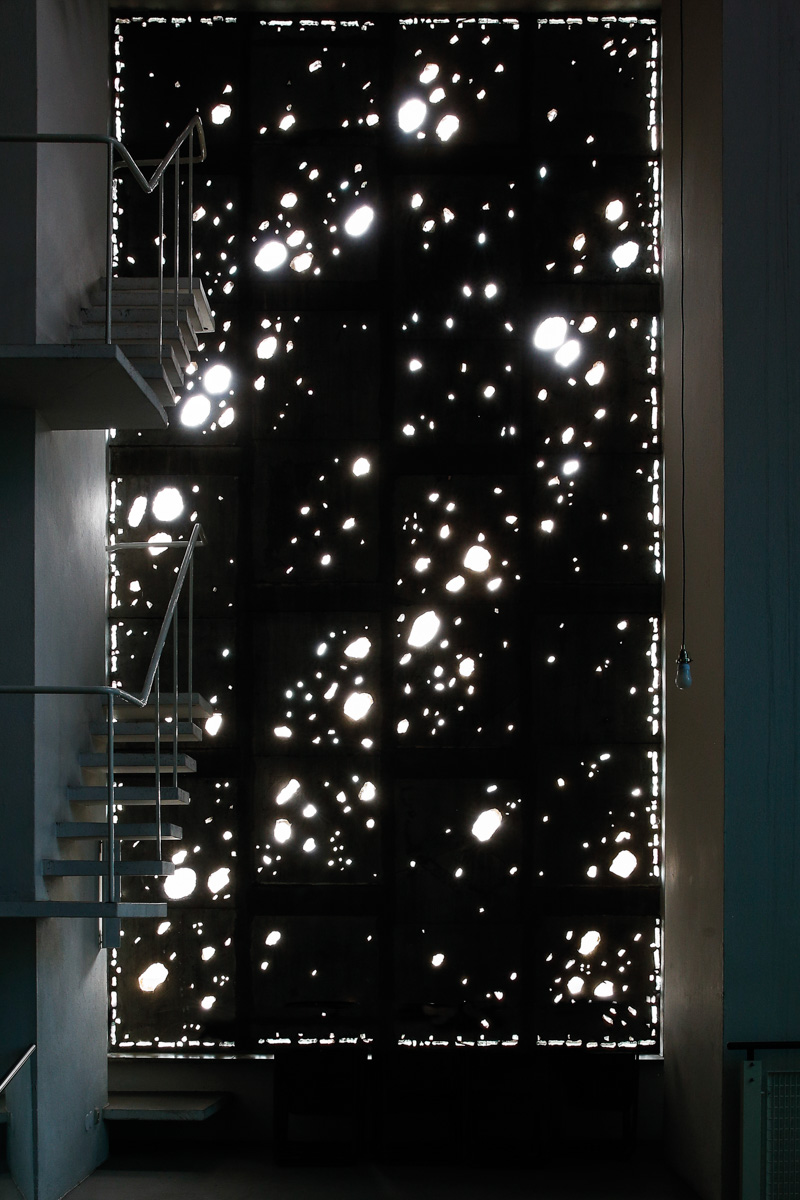 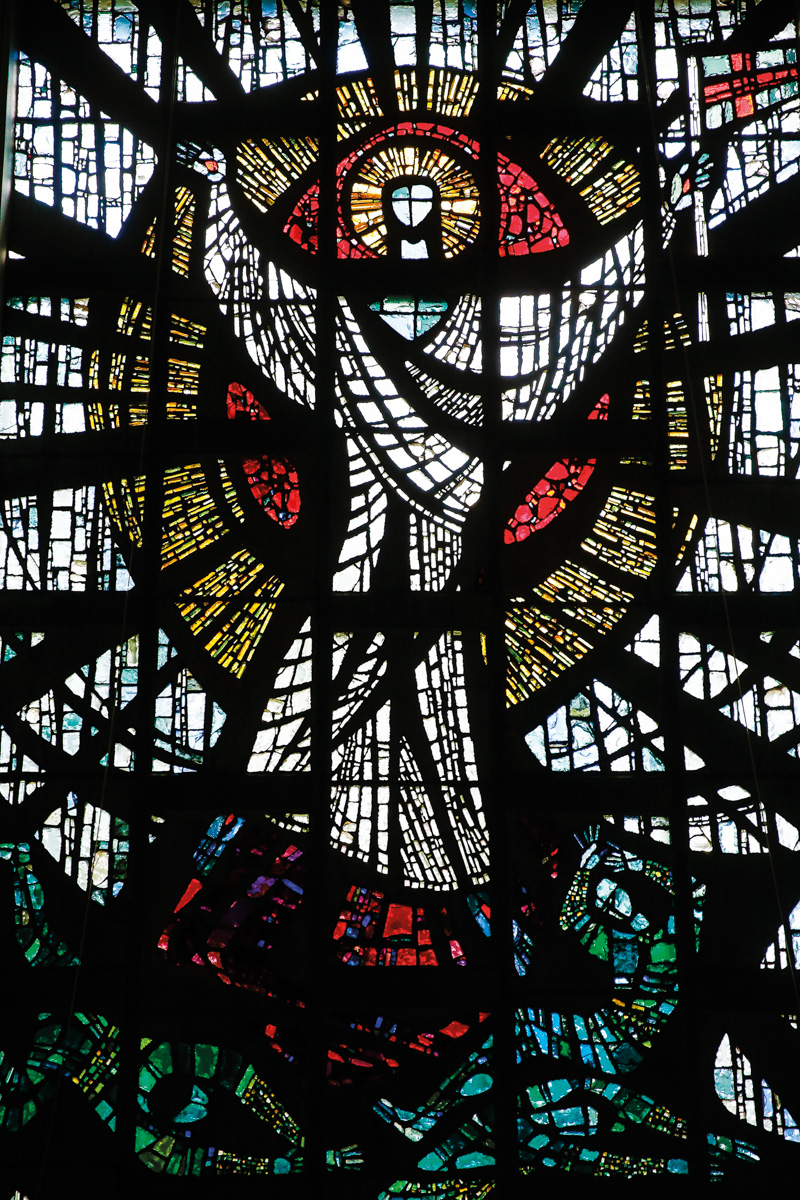 The austere church building, which was build based on plans by Karl Lebwohl in Graz-Wetzelsdorf from 1957 to 1959, does not force itself upon the visitor. Yet, the simple architecture opens up to form a light-flooded space inside which is defined by two large-format concrete glass windows that encompass the height of the entire space and a series of fourteen small-format lead glass windows. Even though created before the Second Vatican Council, the diagonally facing glass surfaces mark a generous space for celebrating the Holy Mass for a reoriented congregation. Unfortunately, the mosaic picture, which was installed in 1962 by order of the bishop—a representation of the cross by Hubert Tuttner, which originally had not been created for this church— compromises the aesthetical basic conception of the space. Albert Birkle (1900–1986) created the large pictorial works of the church in the new technique of concrete glazing, which has its origins in France. These fascinating “light paintings” stand out due to an unparalleled intensity of colours and tangible plasticity. The shining chunks of molten glass make the represented pictorial vision palpable. One can rightly speak of an “incarnation of light”. Light and life can only be fully grasped against the background of darkness and absence. This clearly takes effect in the representation of a cosmic nebula—or is it just a dark night sky?—above the side entrance to the south. An image with deeply mystical qualities. The window of Creation on the west side of the church, which was created as recently as 1961 and tapers off in steps towards the top, is graphically defined by an elliptically rotating swirl that merges into a flooding field of light in the upper third of the image. Alpha and omega are written on top of it as the symbols for the one who is the origin and end of Creation. The wildly chaotic primordial ocean is permeated by rays of light that emanate from God’s hand and bring life in all its diversity into our existence. The Creator’s hand is embedded in a radiating aura that merges from a core into a bright yellow disc and a star-shaped flow of white. The individual stars and further works of Creation emerge from the cosmic primal ground bursting with energy. Likewise, a round image that shows the creation of human beings as man and woman dissolves from the dynamic swirl—already with the snake betraying them to the Fall under the tree of life. Towards the bottom, the imposing glass image is grounded by the representation of the diverse fauna flanking the main portal. While the window of Creation is characterised by a rotating dynamics of becoming and developing, the window with the image of the risen Christ on the north side of the church, which was created in 1959, is defined by a radial graphic work. The dark stripes refer dynamically to the outside but also lead towards the centre, and entangle themselves and dissolve in the figure of the risen Christ in his bright white garments, who is highlighted with a red and yellow mandorla. The hands and feet of triumphant Christ show the stigmata. The shining figure of Christ the King— without a crown!—rises above the sleeping guards and soldiers. Or is it, at a closer look, the silhouettes of the dead who are waiting for a similar rising? Birkle makes use of the traditional representation of the victorious risen Christ but turns it into an image of authentic universality by embedding it into an abstract field of radiation. Its carnation is a bright blue, which is an attempt to express the new mode of existence and definite affiliation of the resurrected Christ to the world of God. Its presence is convincing and brands itself on the memory.