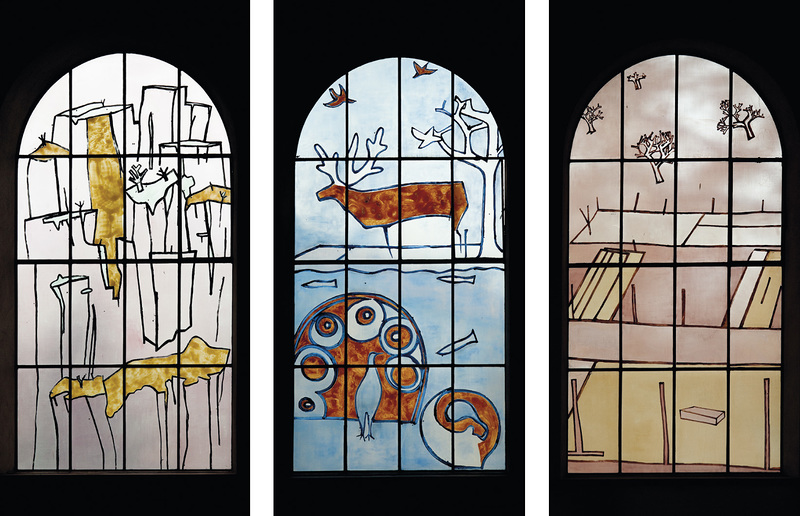 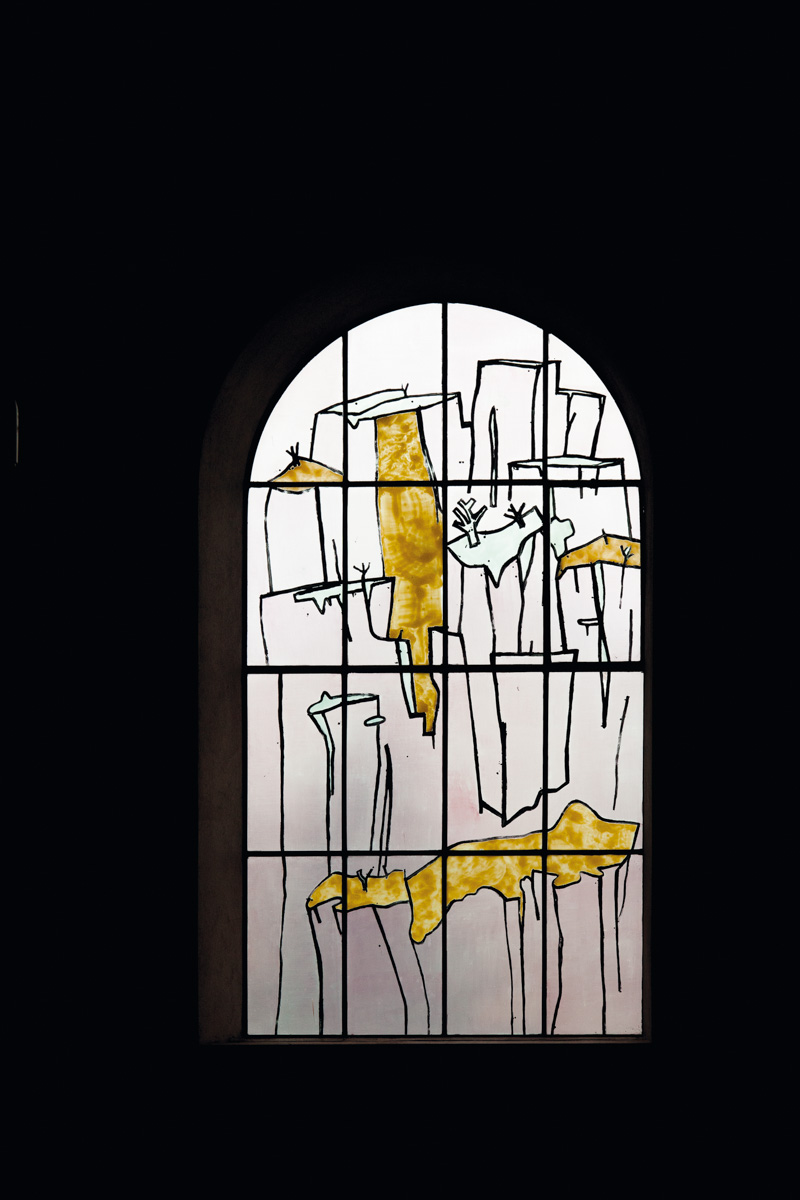 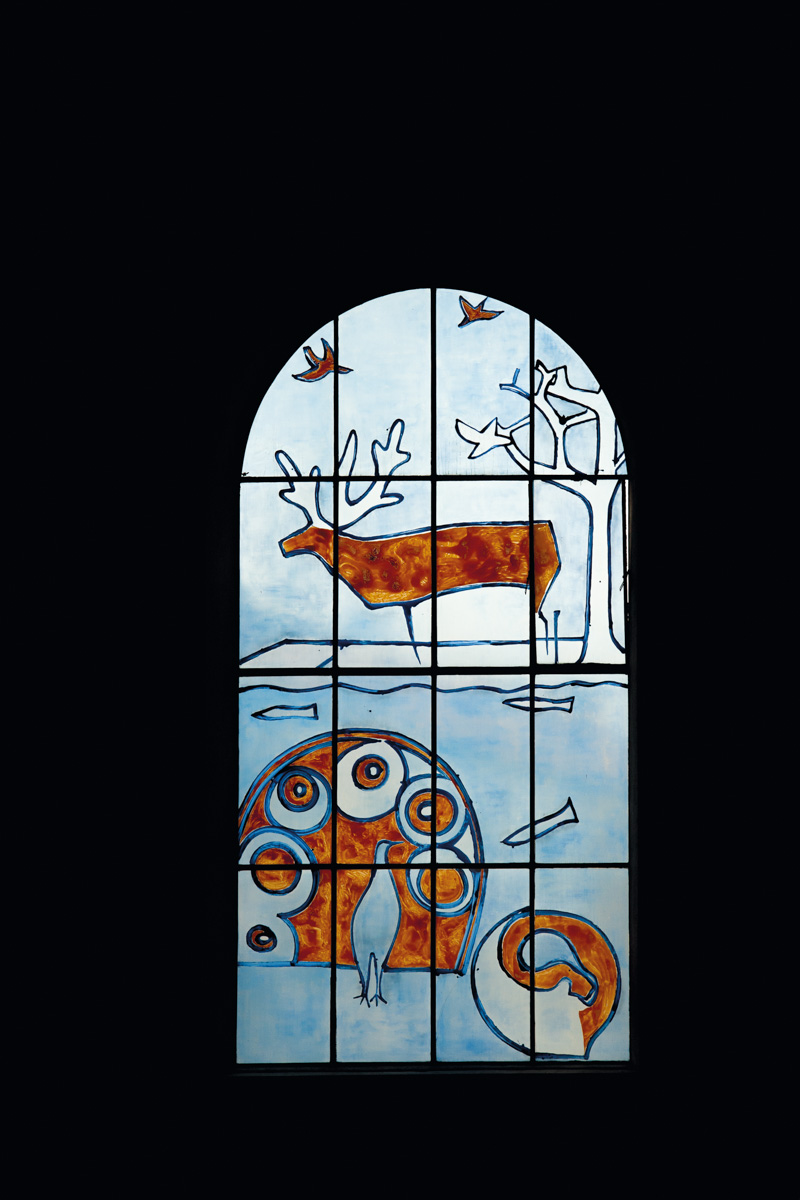 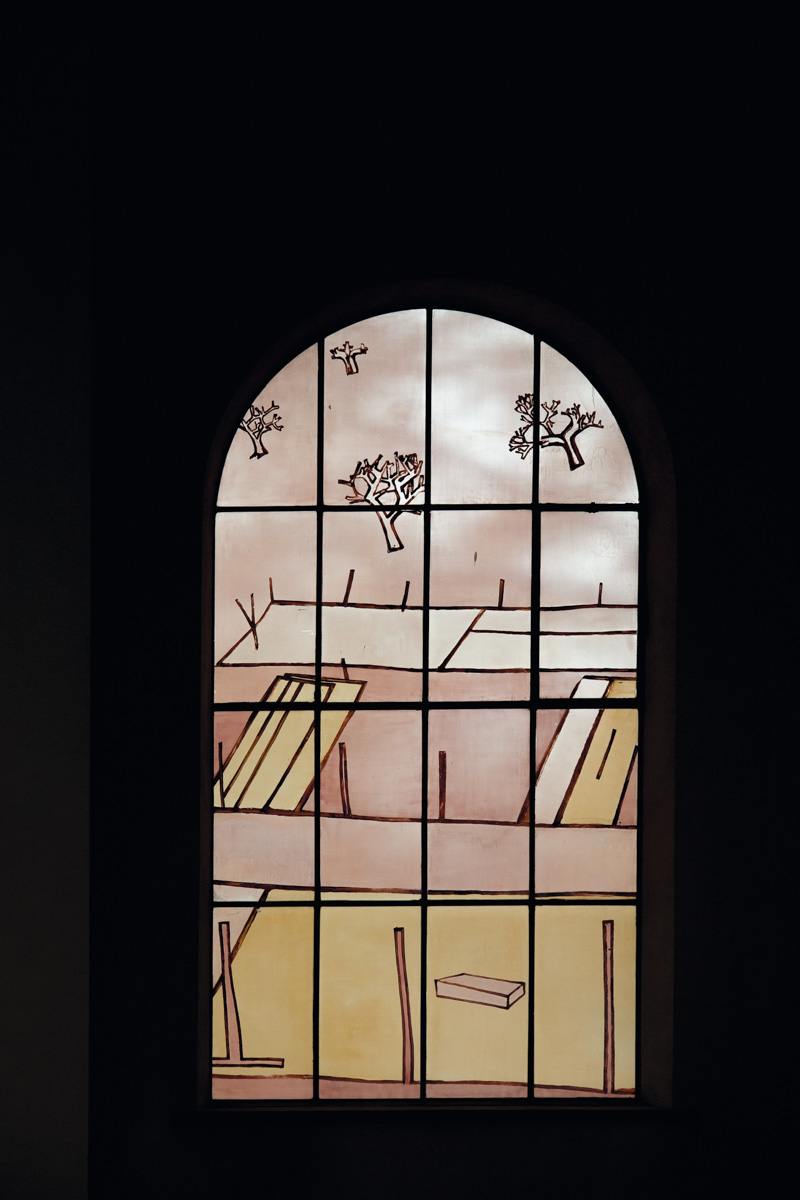 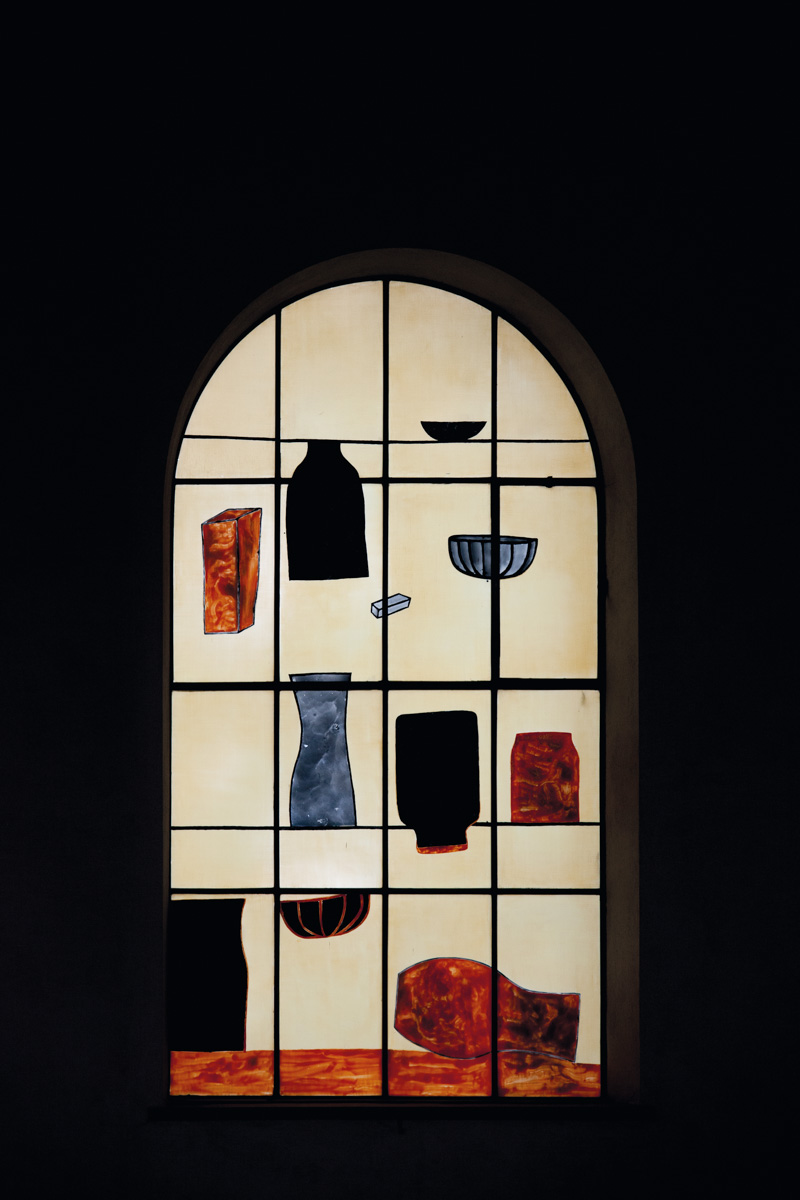 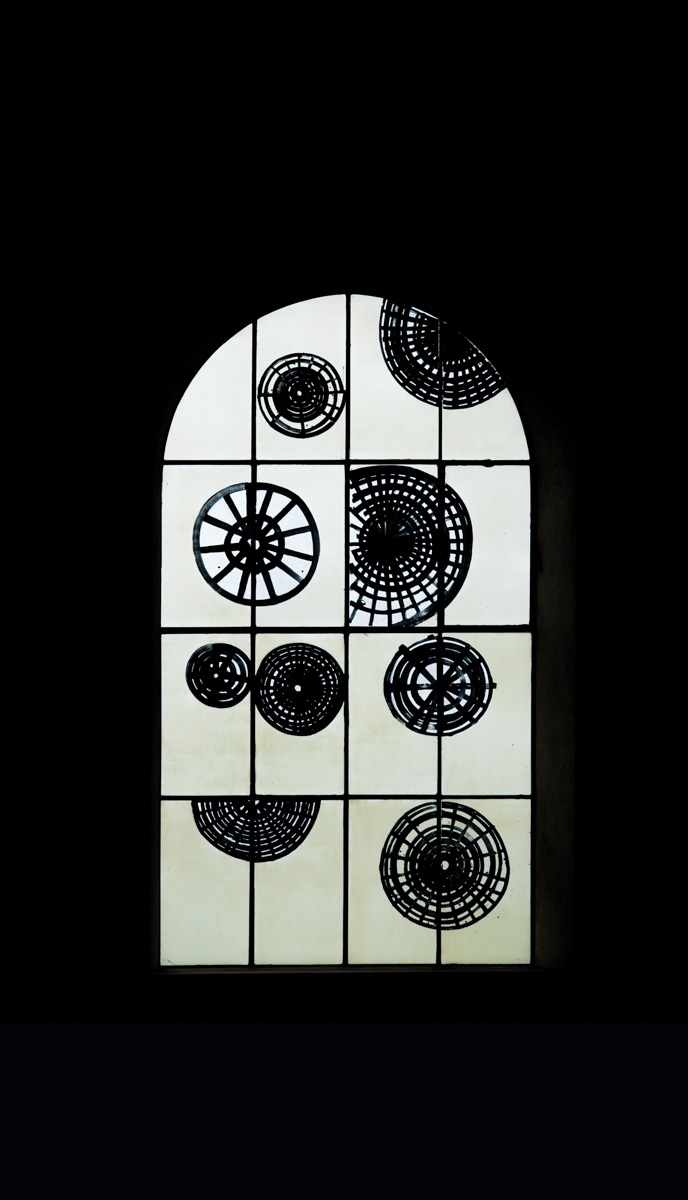 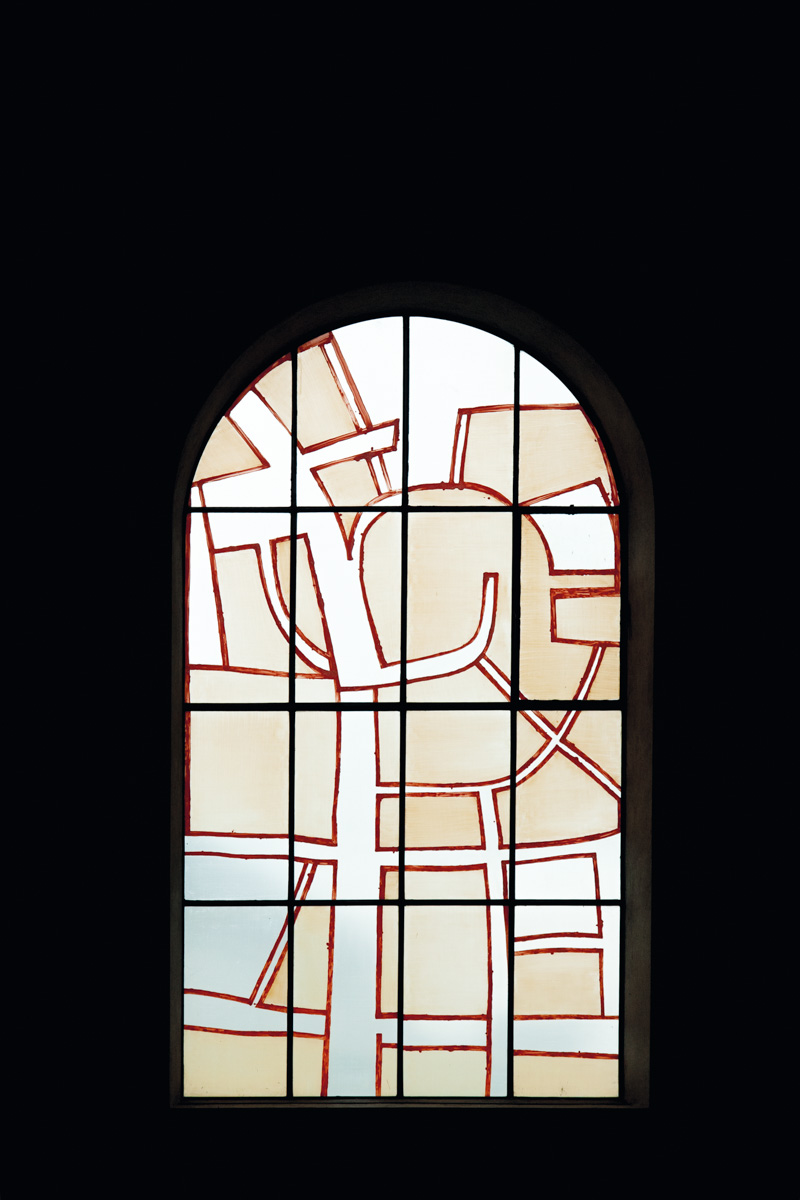 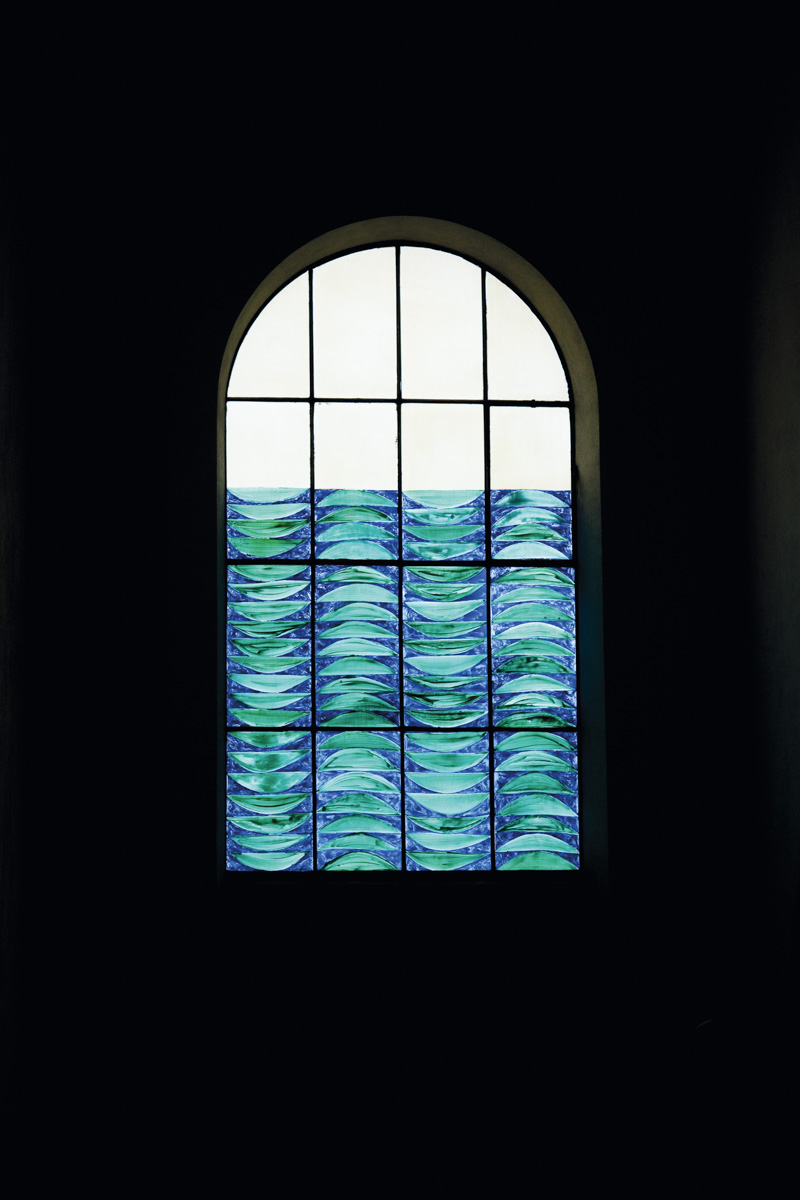 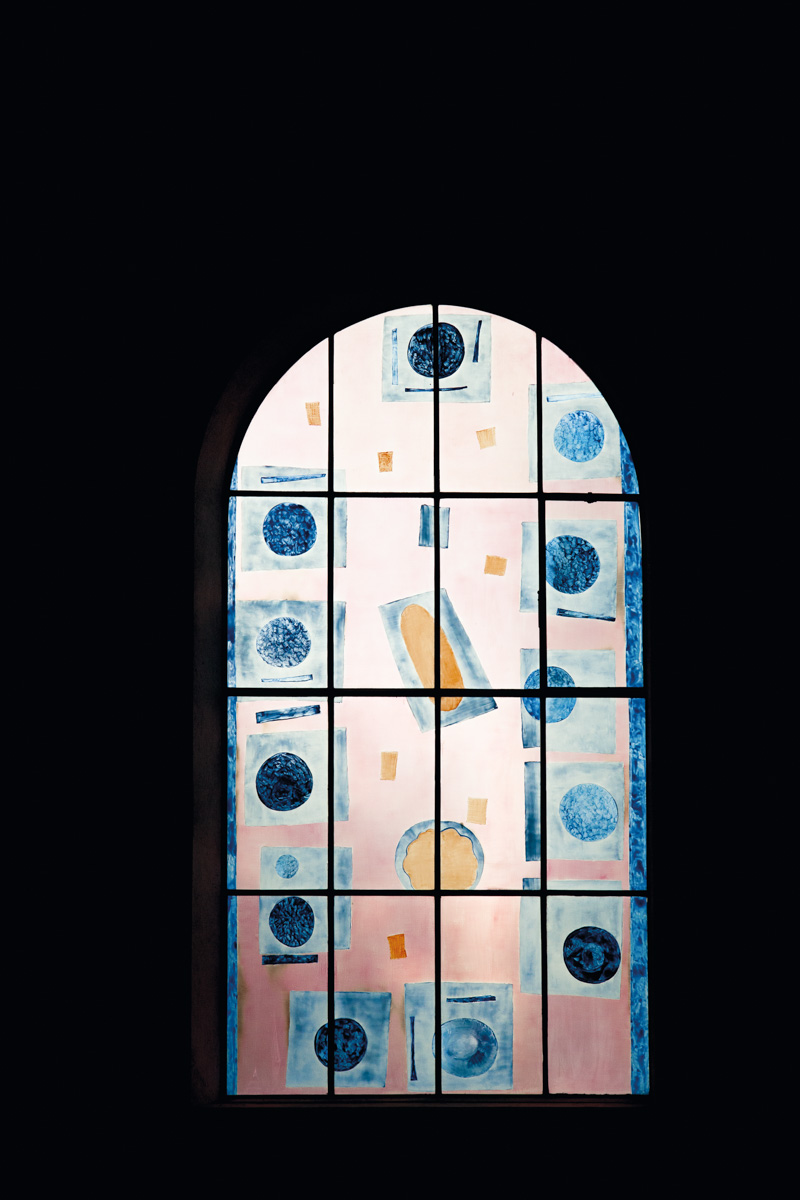 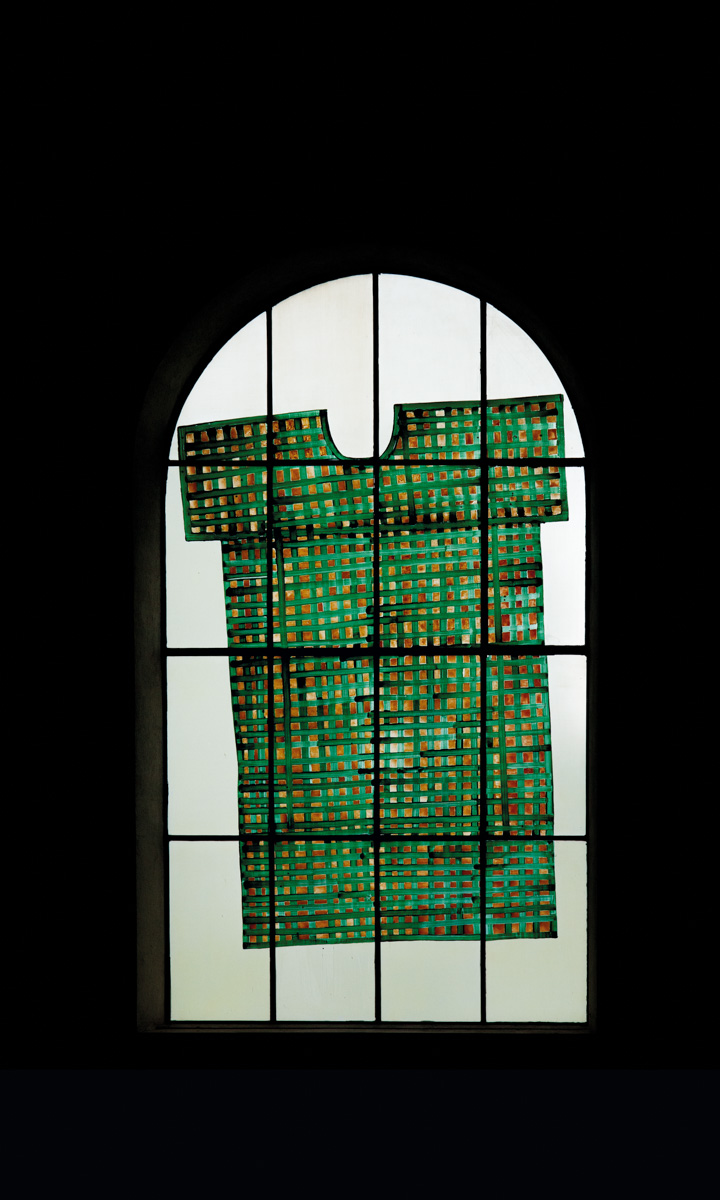 How can the cycles of the history of salvation as they decorated the walls and glass windows of churches over centuries be represented today? How can one show them without working figuratively? Fritz Panzer’s (*1945) glass window designs in the Münzgraben Church in Graz (1997) are an important example for this: They are convincing in their simplicity. They can be read in terms of “ars humilis” (Erich Auerbach), i.e. a “low, down-to-earth, and humble” manner of artistic work, as desired from Christian art time and again. Redirected into a universal symbolic language, cosmic, creation-theological, Christological, sacramental-theological, and eschatological subjects are interpreted in a new manner. The “Window of Obscured Stars” shows black spoked wheels on bright ground—sometimes half the wheel, for the most part the entire wheel. Creation as cosmic drama, the universe, and knowledge of God are touched upon. The “Window of the Rock” is a similar case: The seemingly crystalline lines evade superficial symbolism. The mountain, the rock—a reference to the fact that a mystery remains. The rock is not only used in the Old Testament as a symbol for God. The passing by of the Lord in the shadow of the rock, the Mount Sinai as the place where God manifested himself, the water from the rock that saved Moses are biblical references for a visual representation of the mystery. The cut into a body of water can be found in the “Water Window”. It reminds of early mosaics of baptism in its formal arrangement. The waves appear as plates, open at the top and giving away at the bottom. The “Window of Reconciled Creation” shows living organisms—a stag, a peacock, birds, fishes, a tree, an amniotic sac—on blue ground, their outlines are also blue, and their bodies are painted brown: Archaic animal motifs meet Arcadian gardens, and with them the desire for a peaceful culture and civilisation. The motif of peace among the animals from Isaiah 63 is called up, as well as a simple view on everything living. Associations to the Passion of Christ come up in the following windows but they are not only related to Jesus, and not solely to his suffering: The “Window of the Robe” may remind of the Seamless Robe of Jesus in Trier but it is also armour and protection, and a symbol of dignity as promised by the baptismal rite. The “Window of the Vessels” reminds of the cup that shall be taken away from Jesus but also to any cup of cultic dimensions, or simply of drinking together. Or, they are vases for flowers. Or cups, which only the artist Morandi could paint in a timeless manner. The “Window of the Meal” shows twelve blue place settings on a pink tablecloth from above: a meal without a traitor, if one interprets it in terms of the Last Supper of Christ. But it can also be a simple meal of a larger table fellowship. The “Window of the Garden” does not show any suburban idyll of happy living but rather a garden of toil and exhausting work: Gethsemane, the garden of fear of the suffering of Jesus, seems to be obvious. And, eventually, the window of the “polis”: Life happens in a concrete, and also political, structure. The abstracted city map of Graz refers the history of salvation to a very concrete place. It is happening here and now, in Graz.