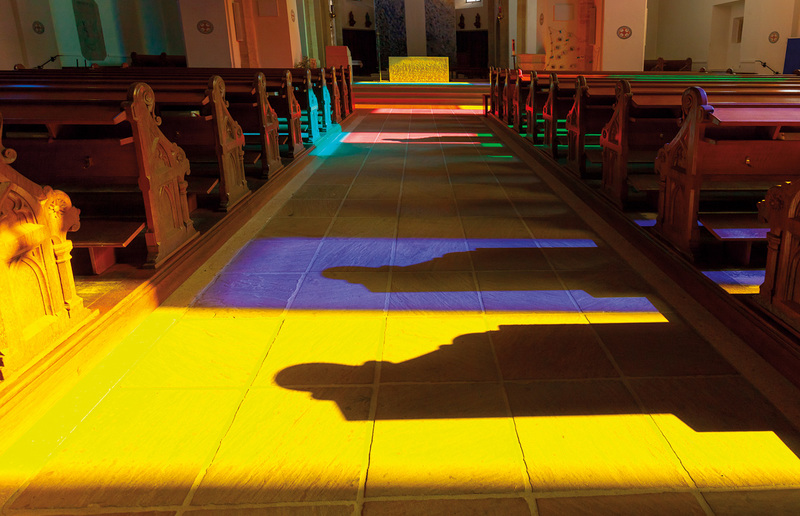 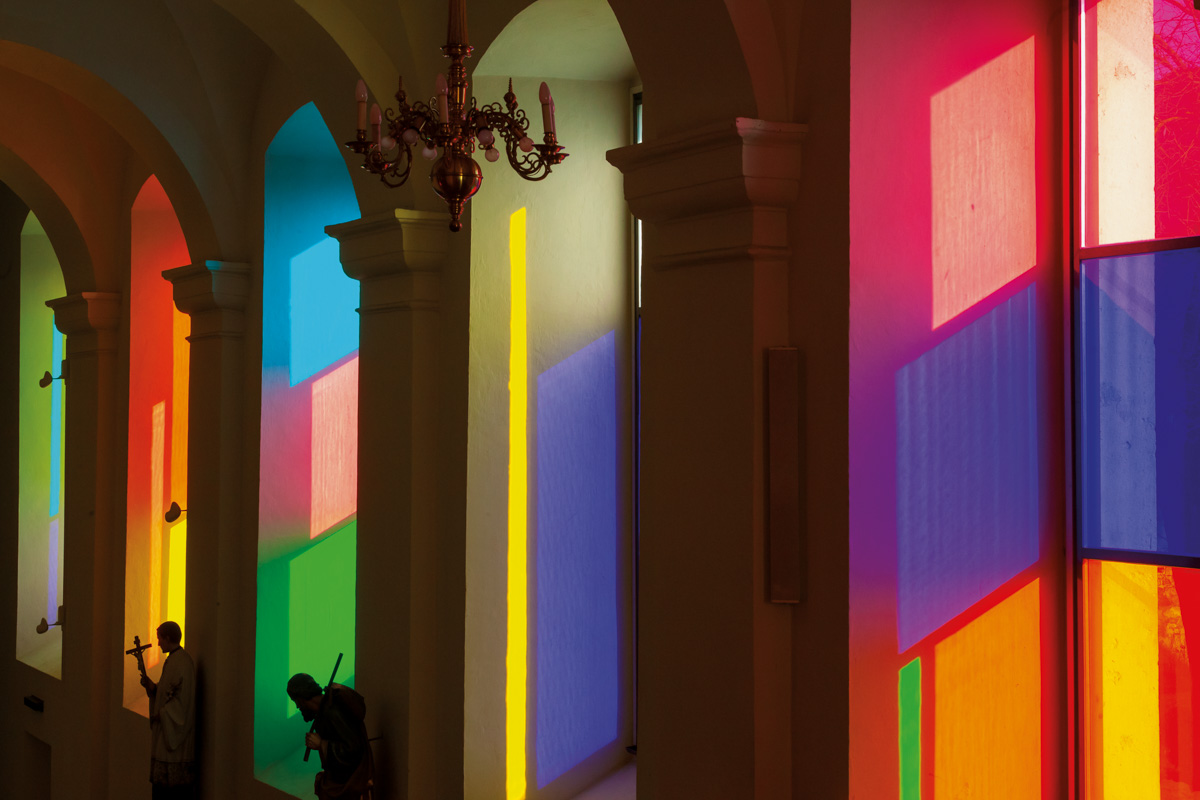 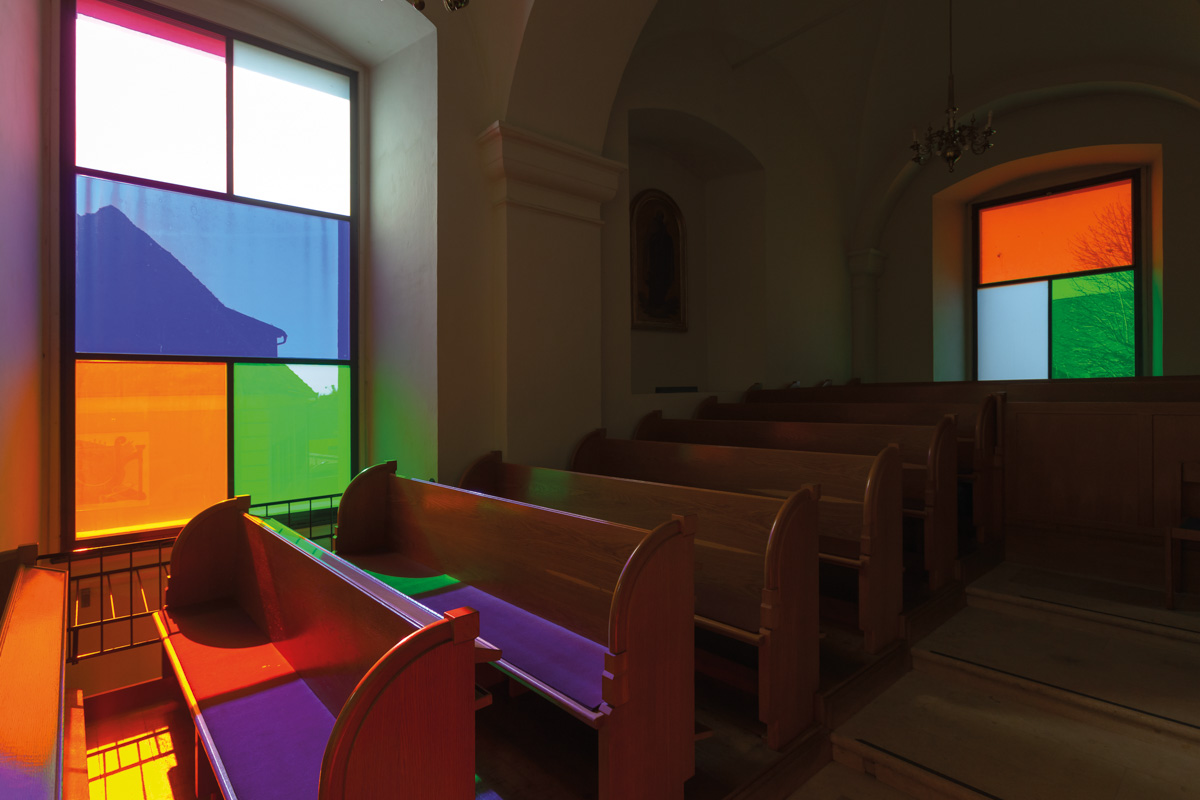 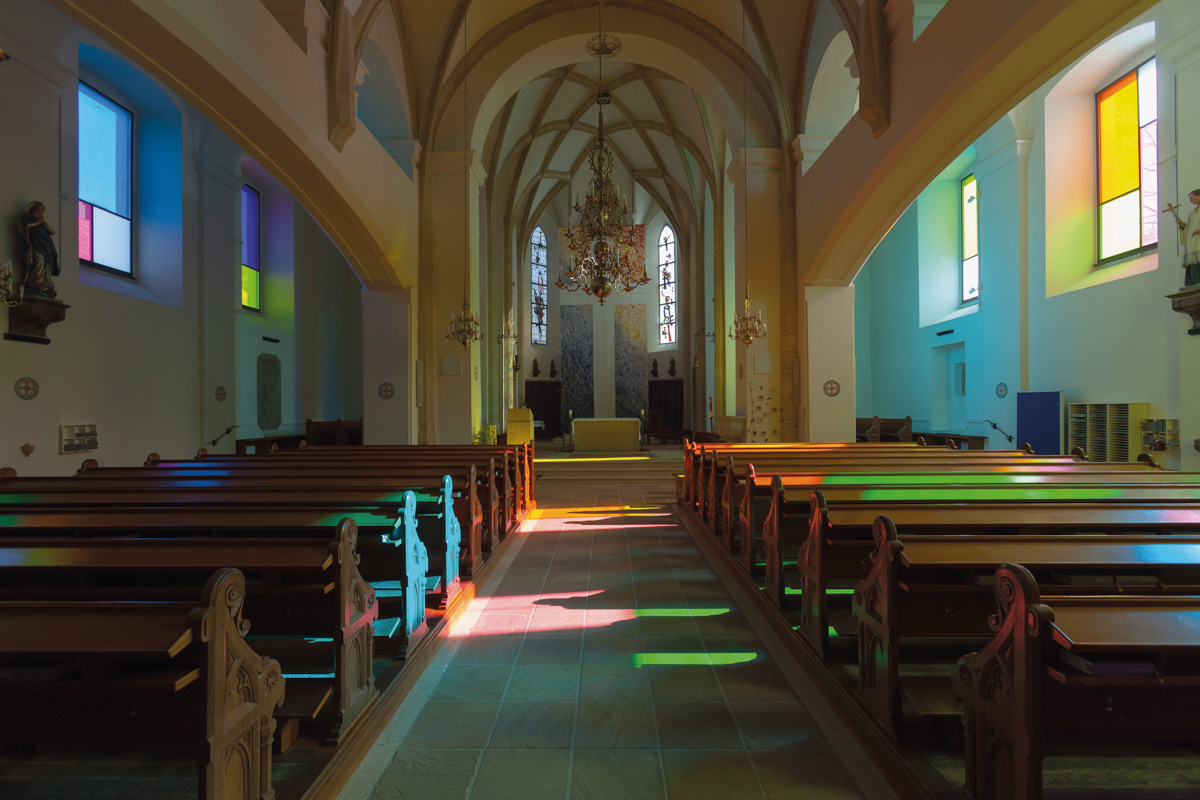 Light from the World of Today

How can one immerse the historical church space in a new light the conditions of the creation of which is linked to contemporary image production? This is the fascinating question for the parish church of Gnas, which has been answered by Flora Neuwirth (*1971). The artist, who comes from West Styria and lives in Vienna, is internationally renowned for mixing high and low culture, and developing new artistic dimensions in this. Her characteristic colours are her trademark. Yet, Neuwirth did without grand gestures in this glass window design. Her colours are simple at first sight but they fundamentally change the historical space in sunlight; they put objects, surfaces, and images into a completely new light of primary colours. From the basically existing division of windows—two vertical glass surfaces and the horizontal surface on top of them—, Neuwirth developed a large number of new divisions which create a new rhythm in their alternation of large and small surfaces in an almost Mondrianesque manner. She allocated one monochromatic colour to each surface. In sum, these are seven shades by means of which she immerses the church space into an alternating light produced by such colours. Digital image production—that is, the one we have become completely familiar with by now—dictates the rhythm here. Neuwirth’s characteristic choice of colours has been taken from the digital basic values of the RGB and the CMYK system, hence the fundamental colour filters without which no images at all would be handed down to us anymore. The RGB colour space (red-green-blue) is additive and corresponds to the light; CMYK (cyan, magenta, yellow, and key), which is used in printing, is a subtractive colour model. Of course, this fundamental reduction is also an iconoclastic reservation against the flood of images we are exposed to—and if it is only the landscape of an east Styrian village that ceased to evade the images beyond its border already a long time ago. Here, artistic and theological intentions meet in an unusually partner-like alliance. Flora Neuwirth has demonstrated in an impressive manner that the debate around high culture or low-threshold access need not only be conducted in the art context but also applies to regions with an unbroken religious practice where the contemporary language of forms is otherwise completely alien: an unusual bridging of worlds far beyond the brand management of big names. The church window project in Gnas was carried out on the occasion of the 15th anniversary of the renovation of the church: One simply wanted to do something for one’s own church, which is visited by about 2,000 people for the celebration of the Holy Mass every week.