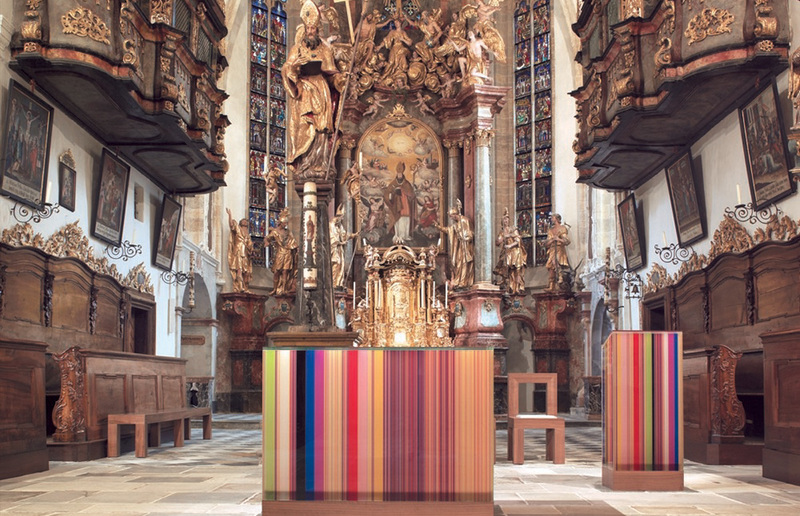 The roots of the St. Erhard Church in the Breitenau reach far back into medieval times. At first, it was probably built as a Romanesque church on a rock ledge over a mineral spring, then it was extended in the Gothic period. In the Baroque period, it was provided with its magnificent interior after further extensions had been built. The artist Sabina Hörtner (*1967) created a new liturgical centre meeting the requirements of the Constitution on the Sacred Liturgy of the Second Vatican Council with economical means in the nearby town of Bruck an der Mur, in a sensitive organic spatial situation that has grown over centuries. The artist, who has already repeatedly attracted attention on the international level with her reduced and unpretentious but carefully thoughtout and thus never simple spatial interventions, was fascinated right away by the luminosity of the Gothic glass paintings in the presbytery of the church. Thus, she carefully filtered two elements from the abundance of forms, the splendid combination of a Gothic space with Baroque furnishings and medieval glass windows: colour and light. Ribbons coloured in the liturgical colours of the Christian year are applied on glass and are turned luminous by natural light; altar and ambo are autonomous cubic sculptures that nevertheless enter a subtle dialogue with the historical church space and its furnishings. The artist strived above all for transparency and lightness in her spatial sculptures that she added to an existing organic conglomerate of colours, forms, and materials. Into the nutwood pedestal that takes up the material of the Baroque pews, the reliquary is visibly embedded behind glass. Sensitively proportioning and positioning the altar, the ambo, and the sessio, the Baroque Saint Erhard column, which is not placed along the longitudinal axis, was carefully integrated into the new liturgical centre without any changes. Sabina Hörtner inscribes the liturgical sites into the continuum of the course of time in the togetherness of the colours of the Christian year. Yet, the colour strips do not only show a juxtaposition and sequence, but also condensation and concentration in the intersecting of the colour ribbons on top of the cubes. The mystery of Creation, into which the cross has been inscribed right from the beginning, reveals itself to those who can embrace it in their faith in the cross structure and in the sign of the cross that is hinted at here: at the table of the word as a reference to pre-existing logos, God’s word of the Creator, in which God’s love of the whole of Creation had manifested before all human language; and at the table of the bread where the love realised on the wood of the cross becomes present. Thus, the altar and the ambo become symbols of profound and vibrant serenity in a church space that presents the religious history of centuries in the glass paintings, the altar images, and the statues.