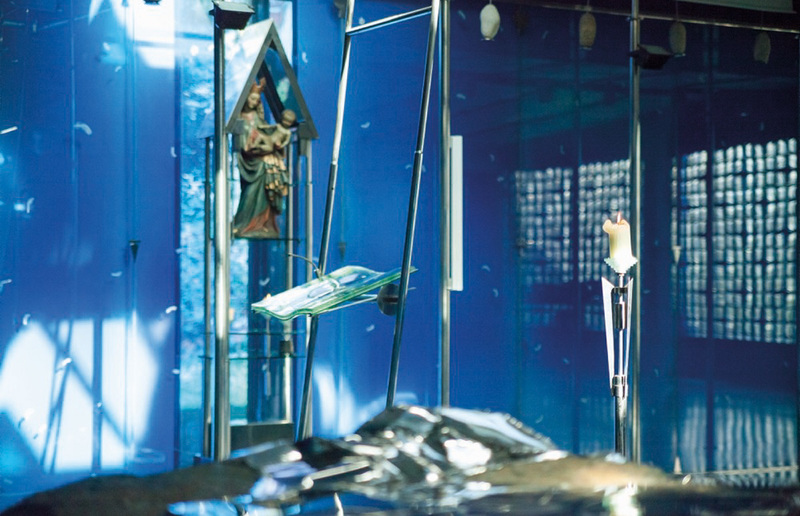 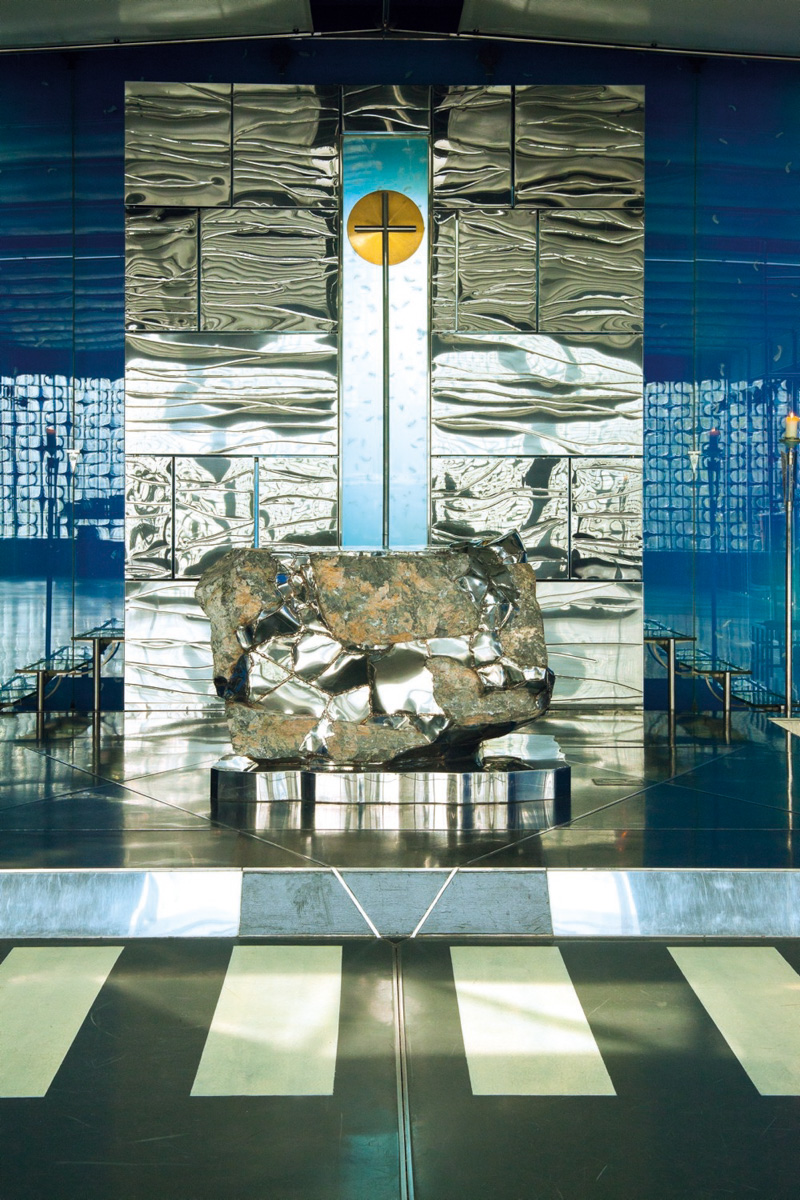 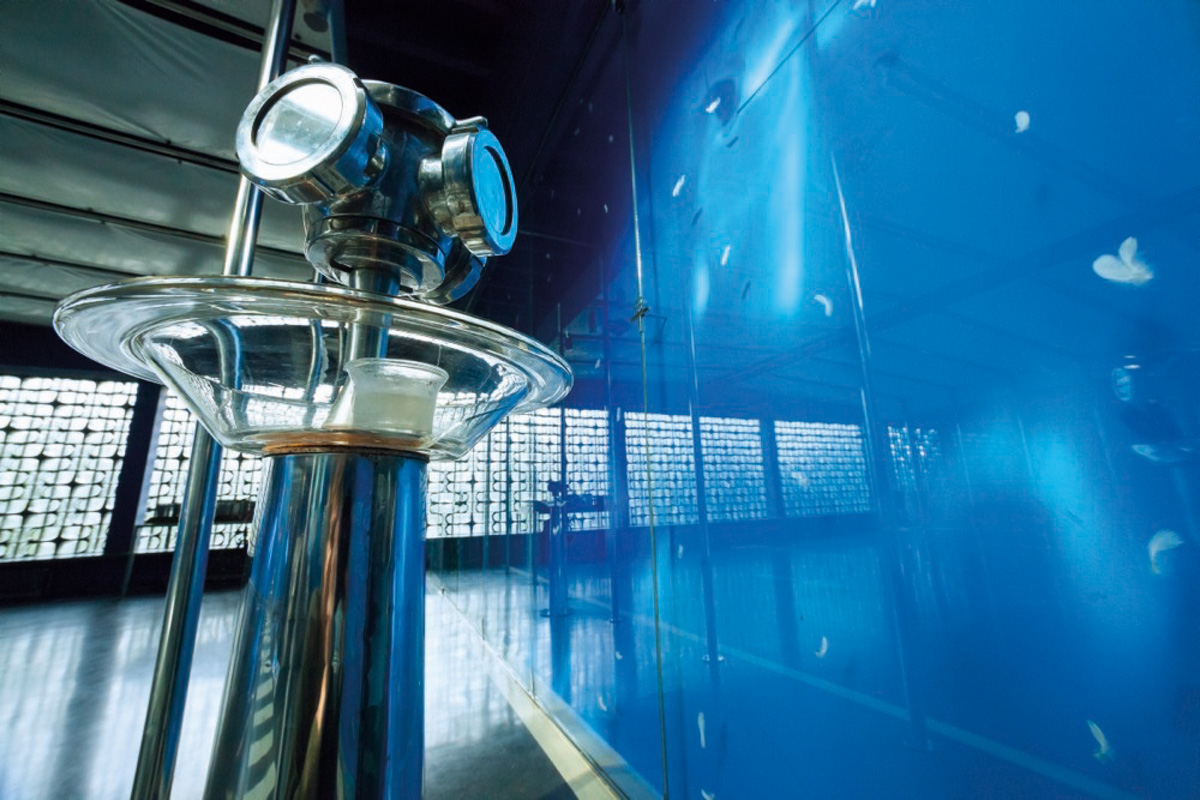 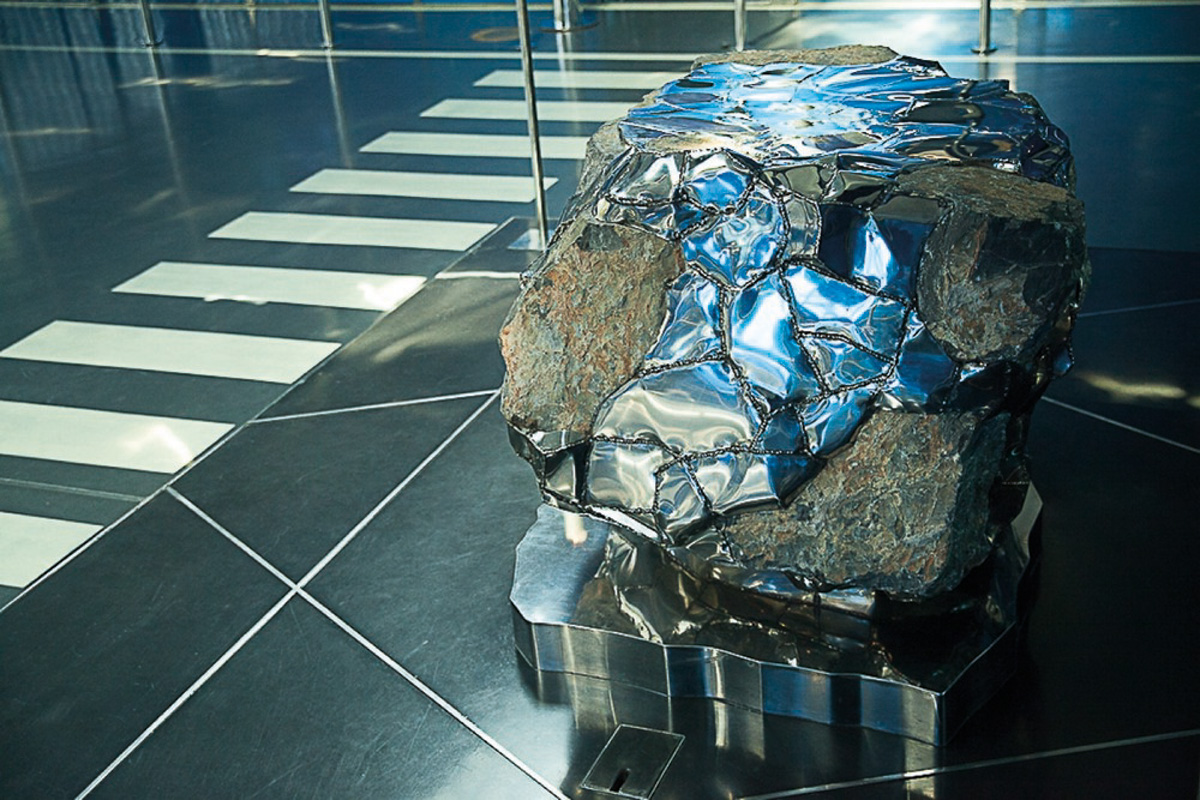 Ambo, dahinter: Marienfigur / Ambo, figure of Mary behind it

Exodus into the Present

The church of St. Lukas at the heavily trafficked exit road of the Eggenberger Gürtel was established as a site of pastoral care between 1969 and 1971, at a time when there was great hope for major development of this quarter with regard to urban planning (which however has not been fulfilled). Along with other community and nursery school rooms, a square multipurpose hall with a glass block wall and light domes was established within the box-like basic layout, which, among other things, served as a place to celebrate the Holy Mass. Yet the decoration has remained absolutely plain all the time. In 1990, the Styrian artist und actionist Othmar Krenn (1952–1998) won an artistic competition for the redesign. His spatial concept established the reference to the church’s location at the heavily trafficked Eggenberger Gürtel: He intended to build a “tent” for the wandering people of God. Supported by the artist and pastoral worker Josef Fink in matters of theology, Othmar Krenn reached into the treasure chest of the Old Testament and added metaphors from everyday life to these symbols. Held by slim stainless steel rods, tarpaulins that are commonly used on lorry trailers cover the redesigned interior space. The walls are formed of slightly reflecting blue glass panels that create the illusion that white feathers are floating to the ground. Thereby, symbols taken from the ancient Egyptian culture, such as the Ankh symbol (life) or the feather (Ma’at), play an iconographic role. With this, Krenn also alludes to the Book of Genesis (Genesis 1). The Jewish Star of David is engraved in the altar zone, which is elevated by one step—for Krenn, this is the commitment that Christianity is built on Judaism. The altar in the shape of a boulder with metal plating stands on top of it—the natural found basic shape is changed by human intervention. The structures of the altar wall are modelled after the ones of the Wailing Wall in Jerusalem, yet silver plating was used instead of stone. A long stainless steel procession cross, which the artist filled with sand from the deserts around the Mount Sinai, leans inside a wedge-shaped panel—a symbol for the forty years the Israelites wandered in the wilderness. In the front area of the altar zone, a Jacob’s ladder reaches up to the light dome. At the same time, it serves as ambo. Two footprints are visible on the floor—quoting the “footprints of God” of the iconography of Christ’s ascent into heaven but also the footprints of Muhammad in the Dome of the Rock in Jerusalem. The play with different levels of meaning is continued on the footpath in front of the altar area, which leads to the Gothic statue of Mary in the form of a zebra crossing with its white stripes. The tabernacle rests on round bars in the form of a small golden tent. The eternal light is shaped like a traffic light and the stoup reminds of a fire hydrant. Othmar Krenn turned the reflected environment into the fundament of his oeuvre. The symbolic chargedness, which was celebrated with a large number of liturgical objects towards the end of the 20th century, can be found again in a concentrated form in the pastoral care centre of St. Lukas. Yet, the levels of meaning merge here to form a special area of tension between art and the Church that moves us down to the present day.