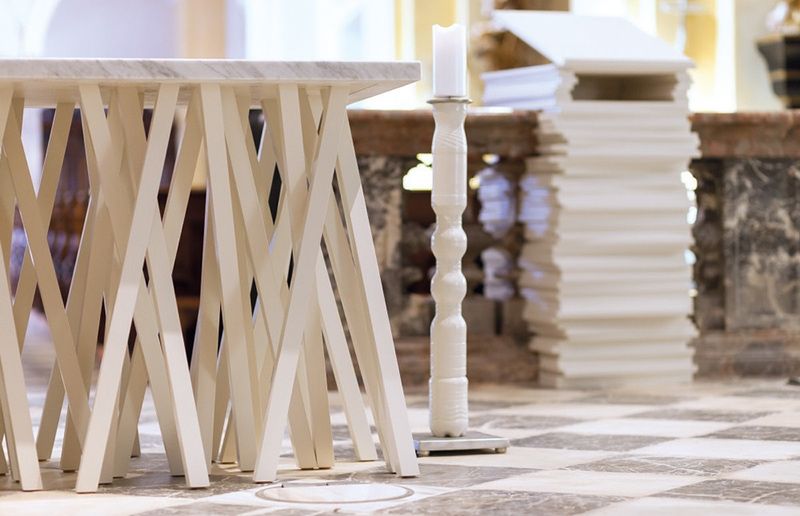 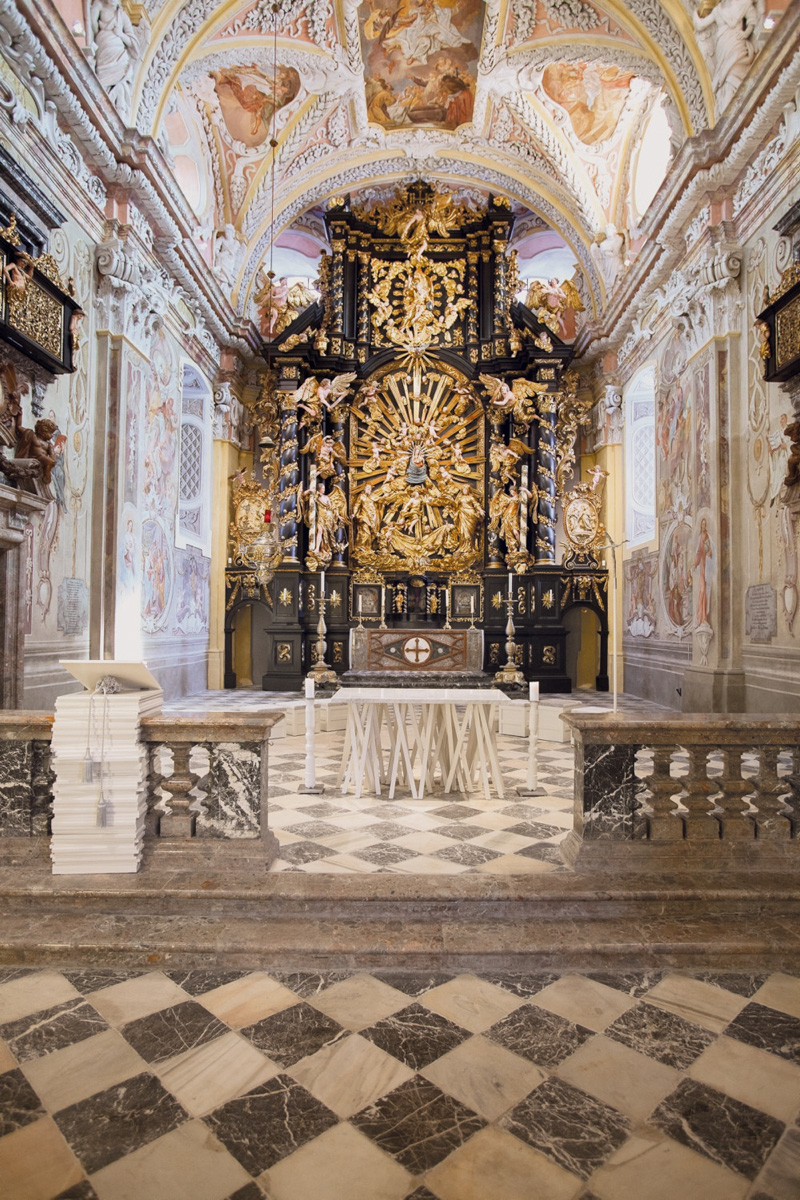 Echo in the Earthly World

In the exuberant Baroque universe of the parish church of Frauenberg near Admont, the Viennabased artist Wendelin Pressl (*1971) redesigned the liturgical core area in a deliberately reduced language of colours and forms: painted wood, Carrara marble, and aluminium set a white and matte silver counterpoint to the luxurious gold and the colours of the Baroque period. However, the forms subtly take up the Baroque dynamics and transform it into the 21st century. The heavy altar slab made of precious marble, which reminds of the stone in front of the empty tomb, is supported by a large number of slanted rods. They do not only let the golden rays of the figure of the Madonna in the high altar visually resonate into the mundane but also establish relations to the flared table legs of rustic parlours of this region. Fifty-two rods result from multiplying the number of apostles and Jesus in the Last Supper by four; it remains open whether this number refers to the legs of the table or the cardinal directions. At any rate, these are many rods that remind us that the events in the Cenacle are laid out towards spreading and proliferation. What is celebrated on the altar is supposed to be translated to the dinner tables at home in our everyday lives. One notices only at a second sight that the candle holders around the altar and the Easter candelabra are casts of plastic water bottles. In its transformation into a different materiality, the banality of industrial production reveals its beauty and also makes us think—against the magnificent mountain backdrop, with which the pilgrimage church is inseparably linked in our perception—of the ecological footprint, the indispensible care for our environment and our responsibility for Creation. Like a pole of books, the artist lets the ambo grow over the historical altar rails in the form of a dynamic stele. As a rest for the Good Book, the artist added one more element to the numerous Marian attributes in the church space. The knotted cord reminds of the painting “Mary Untier of Knots”, which was painted in the tradition of the Baroque. As an artistic “field researcher”, who always also deals with the site’s history, Wendelin Pressl also establishes relations to the founding legend of the pilgrimage to Frauenberg: Inspired by the painting of the Madonna, which is said to have been washed ashore on the riverbank of the Enns at the foot of the church hill, he designed the procession cross next to the altar as a metal cast of branches from the river valley above which the church is enthroned.