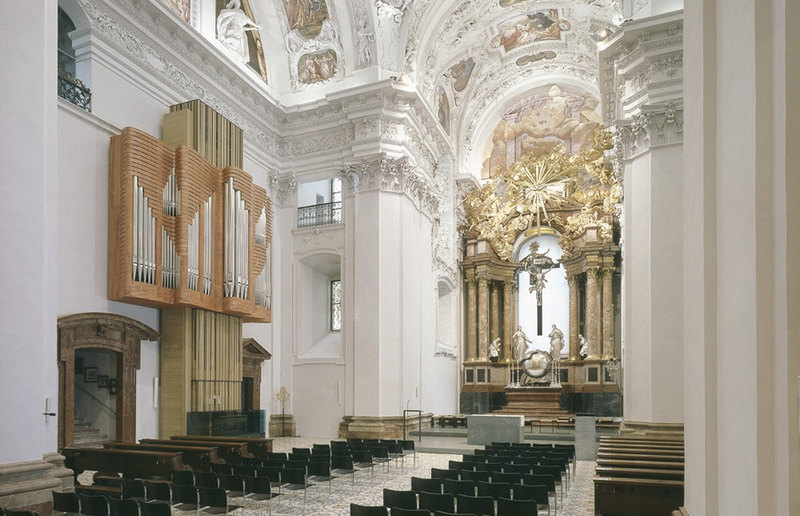 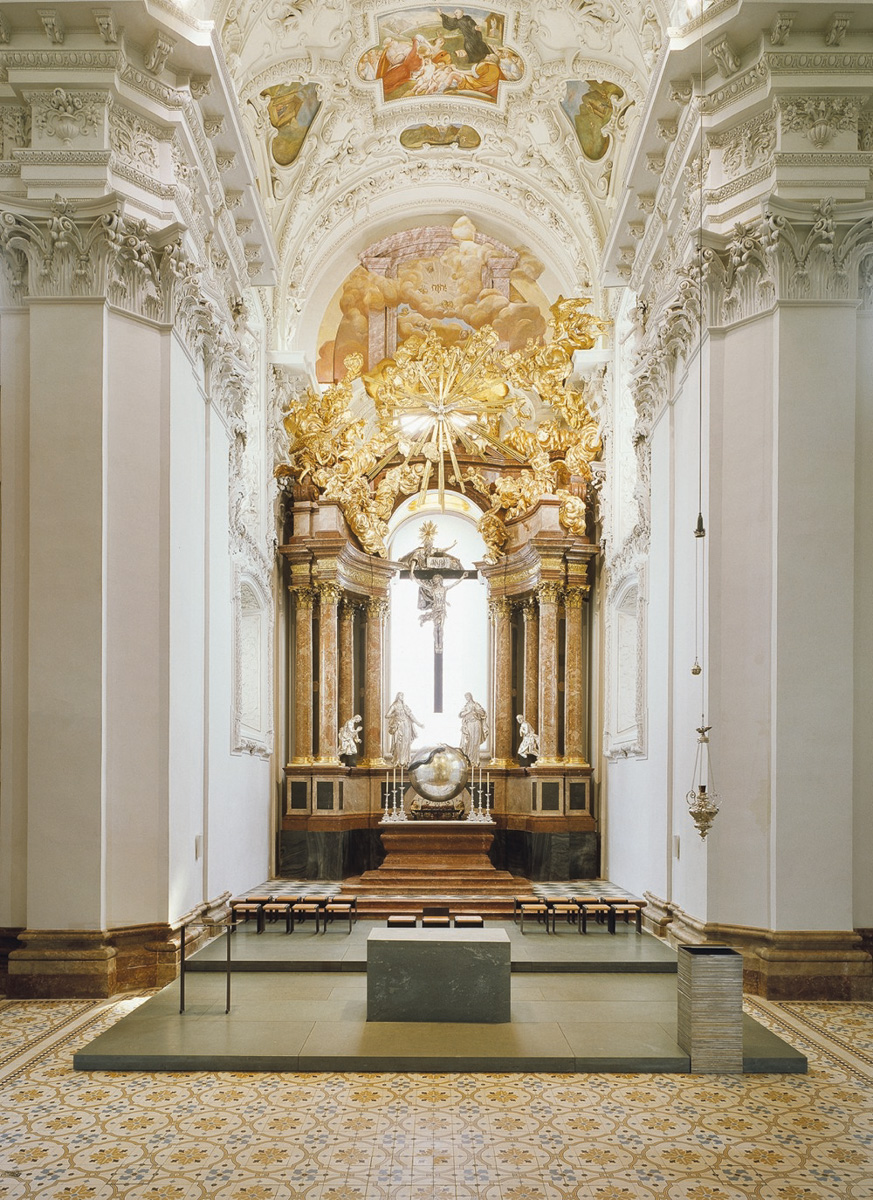 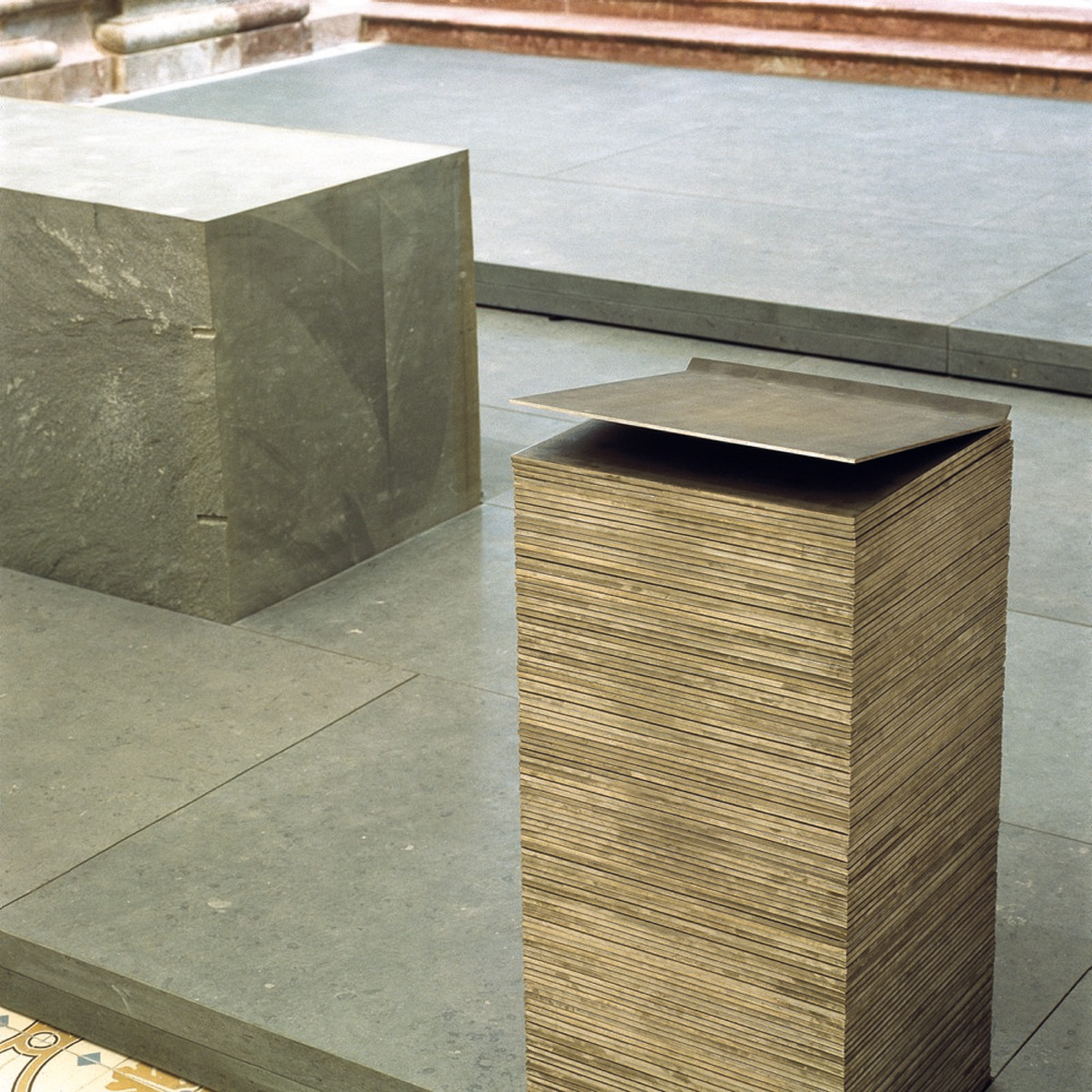 Because of its famous statue of Our Lady (Statue of Grace), the Basilica of the Birth of the Blessed Virgin Mary in Mariazell has been the by far most important place of pilgrimage in Austria and one of the most important ones in Europe since 1157. The destination of about one million pilgrims per year is a small early Gothic Statue of Grace, which stands as the “Magna Mater Austriae” in the Chapel of Grace, right in the middle of the church space. Between 1644 and 1683, a cupola space was added to the Gothic church from the 14th century also to the east. Since 1704, the artistic highlight of the straight choir termination to the east has been an impressive high altar created by Johann Bernhard Fischer von Erlach (1656–1723). His programme follows the model of the medieval Gnadenstuhl (Mercy Seat) Trinity, and added a new theological aspect: God the father does not only offer the world his son as the most important gift (communion) but pulls him up from the abyss of death as the first one of all humans. The entire group of figures floats above the globe, which serves as the tabernacle. The witty idea of storing the sanctum inside the globe makes profession of Jesus in the form of the bread of the Holy Communion as the actual centre of Creation. Mary and John are standing under the cross while Trinity is completed by the dove of the Holy Spirit in the clouds above them. The figures donated to the Church by Emperor Karl VI were made of silver by the Viennese goldsmith Johann Kanischbauer between 1719 and 1721, based on sketches by Lorenzo Mattielli. The wish for more celebration of the liturgy again in the east-side cupola space, i.e. the main space of the basilica, made it necessary to redesign the entire liturgical zone in the sense of the understanding of the liturgy of the Second Vatican Council. From the proposals in the frame of the competition, the one submitted by the architects Wolfgang Feyferlik (*1957) and Susanne Fritzer (*1967) was realised in 2000. In order to generate more space, the Gothic Marian column had already been shifted into the space of the crossing. The rectangular altar pedestal made of large natural stone panels reaches from the presbytery into the cupola in extraordinary simplicity, where it creates space for the places to celebrate the Holy Mass in its slightly elevated state. The altar created by the German sculptor Ulrich Rückriem (*1938), which is intended to make the viewer look at and perceive the sacred mystery through its sculptural clarity, forms the centre. The stone block of Anröchte dolomite rock was broken along a straight surface and does not show any processing marks apart from the drillings necessary for breaking out the block. The place of liturgical celebration is devoid of the cross or the candelabra, as these items can both be found on the high altar. Moved forward into the space on the Epistle side, the ambo stands as the place of the sermon. Based on Feyferlik’s sketches, steel panels of a diameter of about one centimetre have been stacked up from the floor, which weigh about three tons in total. The appearance of the pipe organ on the north wall was also realised on the basis of Feyferlik’s sketches. Above the portals, a transverse and asymmetrically curved crossbeam of stained red spruce wood and visible metal pipes has been placed in front of the ceiling-high ashlar-formed centre tower of oak wood. Like a modern sculpture, the body of the organ fits in the wall surface and the cupola in its clear design.