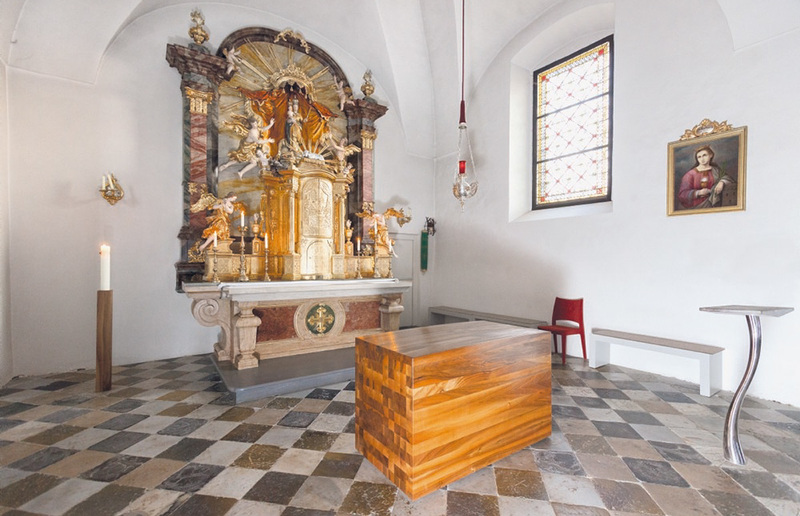 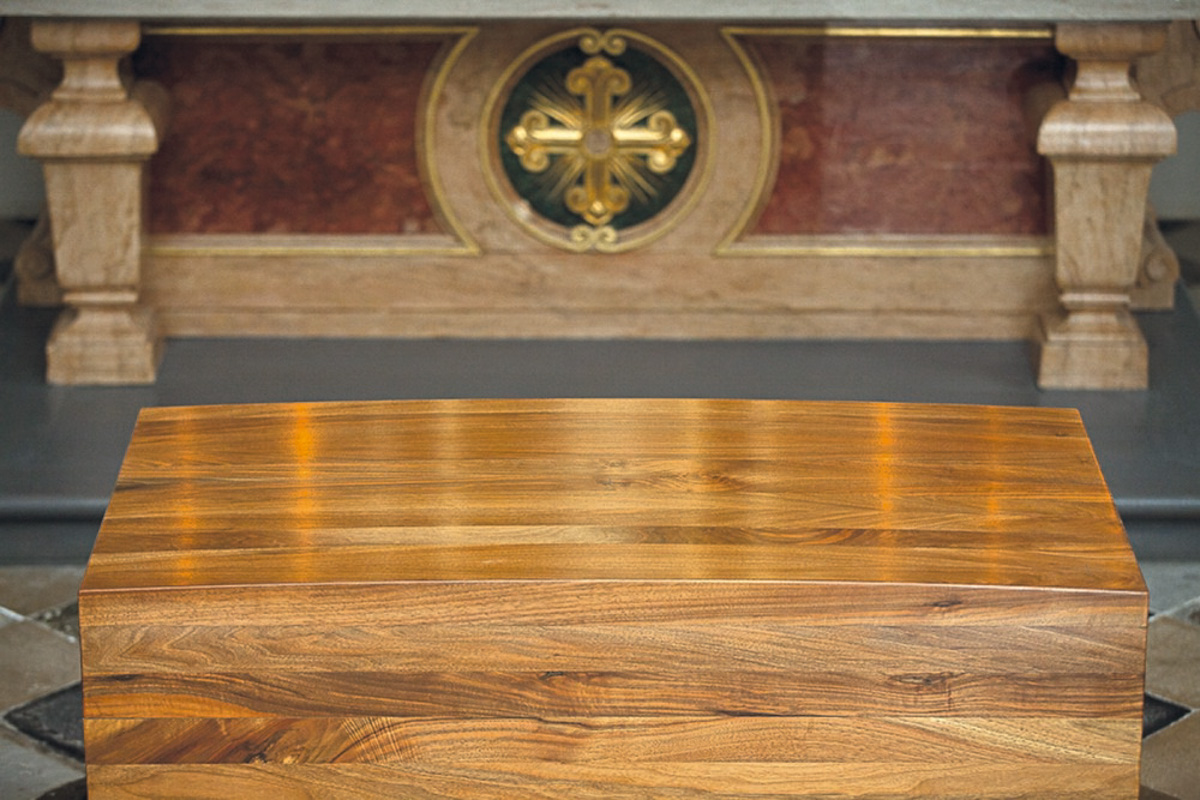 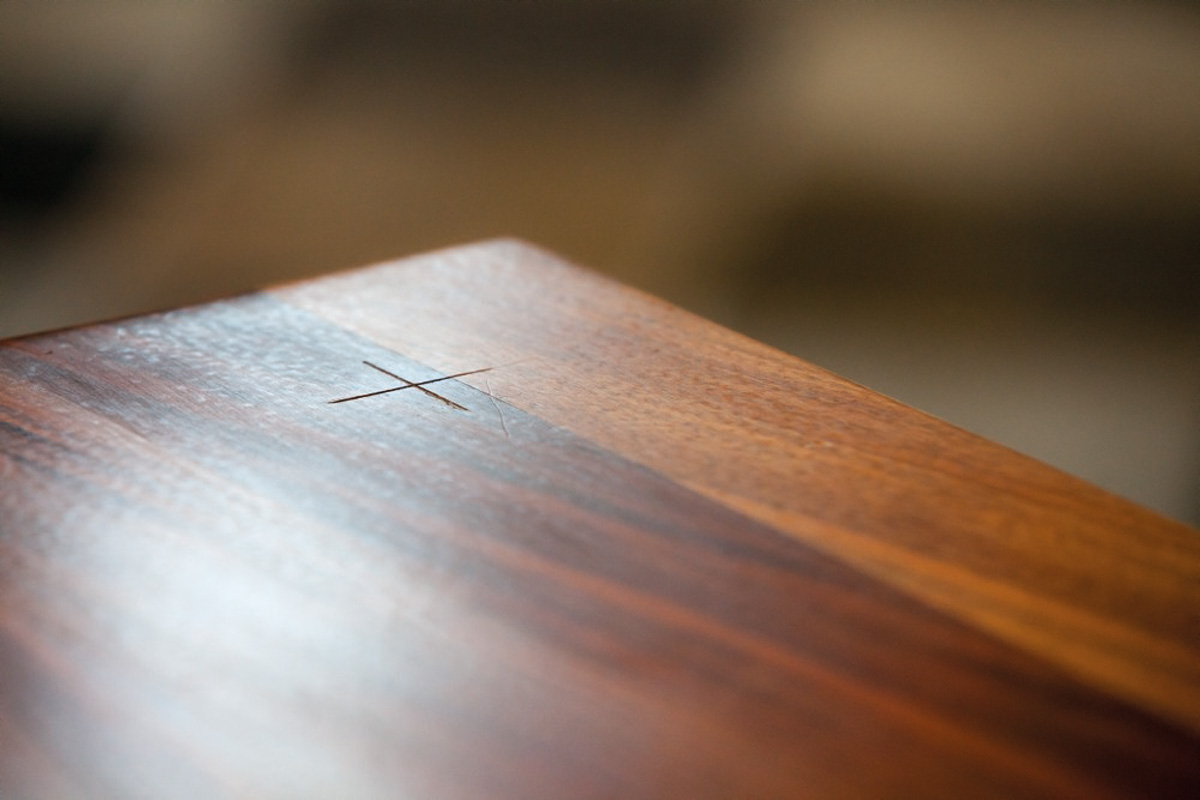 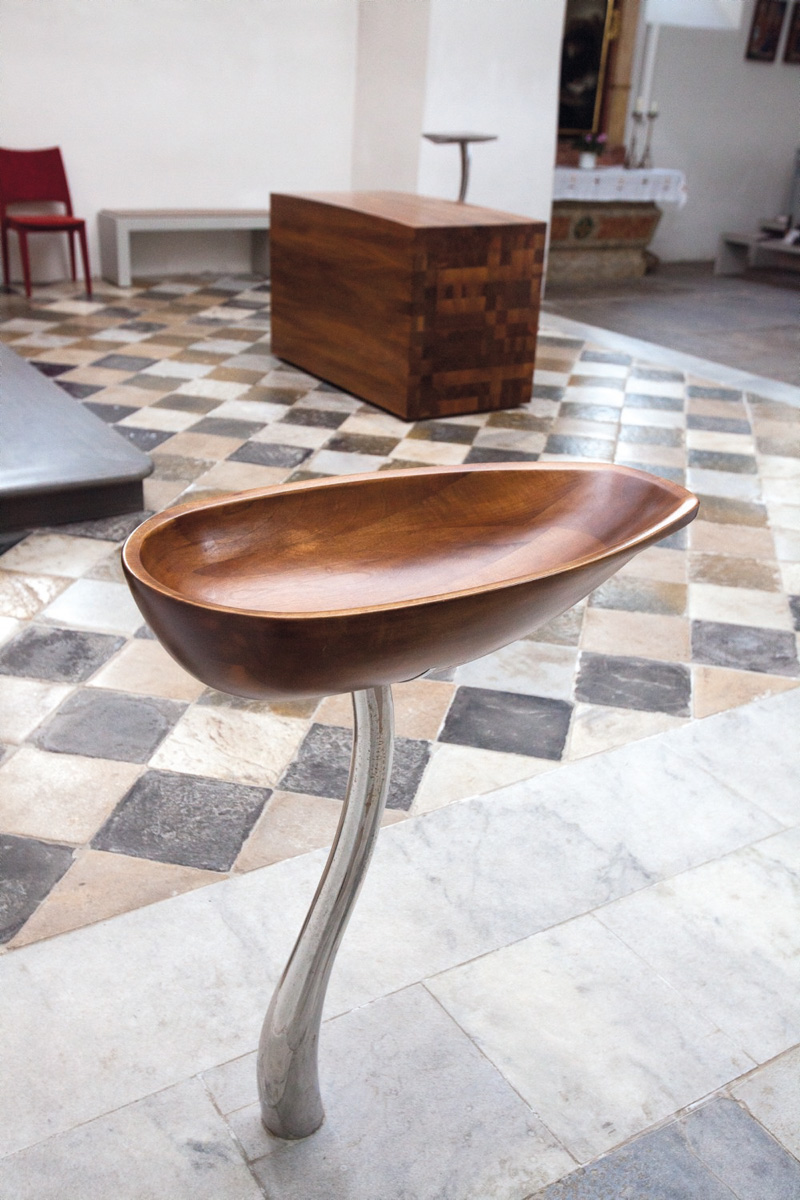 The former chapel of the Gjaidhof—a hunting lodge of the Babenbergs and the Hapsburgs and today’s parish church of Dobl—is a small and at the core Romanesque building. On the one hand, the intimate interior space impresses due to its gorgeous decoration, which was donated by Maria Theresia, on the other, due to cautious and circumspect renovation. When one enters the church, one’s eyes are attracted by the Rococo altar, and the new high altar only gradually emerges as an autonomous element in the choir area. The artist ILA (“I love all“), who was born in 1969, chose a clear, unspectacular form for the altar: a nutwood cuboid, carpentered like a plain box. That this cuboid is gently curved on the top, hardly perceptibly, and that this curvature corresponds to the curvature of the earth, is the essential basis of the artistic concept, and places the altar in a global context. The altars of the world are subsumed under this curvature. If you look at the details, preciousness becomes visible that reveals itself in artisanal perfection, the treatment of the surfaces, and the rhythmisation of the wood structure. Viewed from the front, the altar seems to consist of horizontal boards stacked on top of each other. The construction and the creative logic only become clear in the lateral view. The altar is composed of slim pieces of squared timber that are vertically layered on top of each other. With particular focus on the qualities of this living natural material, the carpenter Dietmar Bischof selected and arranged the timbers. The grain and colour of the nutwood result in an ornamental structure that is softly flowing and sometimes also bleeding. Viewed from the side, the appearance of a precious geometrical inlay work is created by the square cut surfaces of the timbers and their meticulous selection and arrangement. The matte-polished surface underlines the exquisite material quality. The ambo and the baptismal font are designed as a contrast to this. Slim polished stainless steel shafts, which are wider at the top and at the bottom, provide support. On the one hand, it bears a flat gneiss book rest, an open book in cross section; on the other, a bowl made of polished wood, a nutshell, inside which one immediately perceives the child it harbours, rests on this stem. The bowl is detachable—a milled-out cross at its bottom is the notch for the cross-shaped spring at the top end of the steel foot—a linkage that is tight but not visible. Not bold and simple symbolism, but cautious hints are to make meanings perceptible and comprehensible.