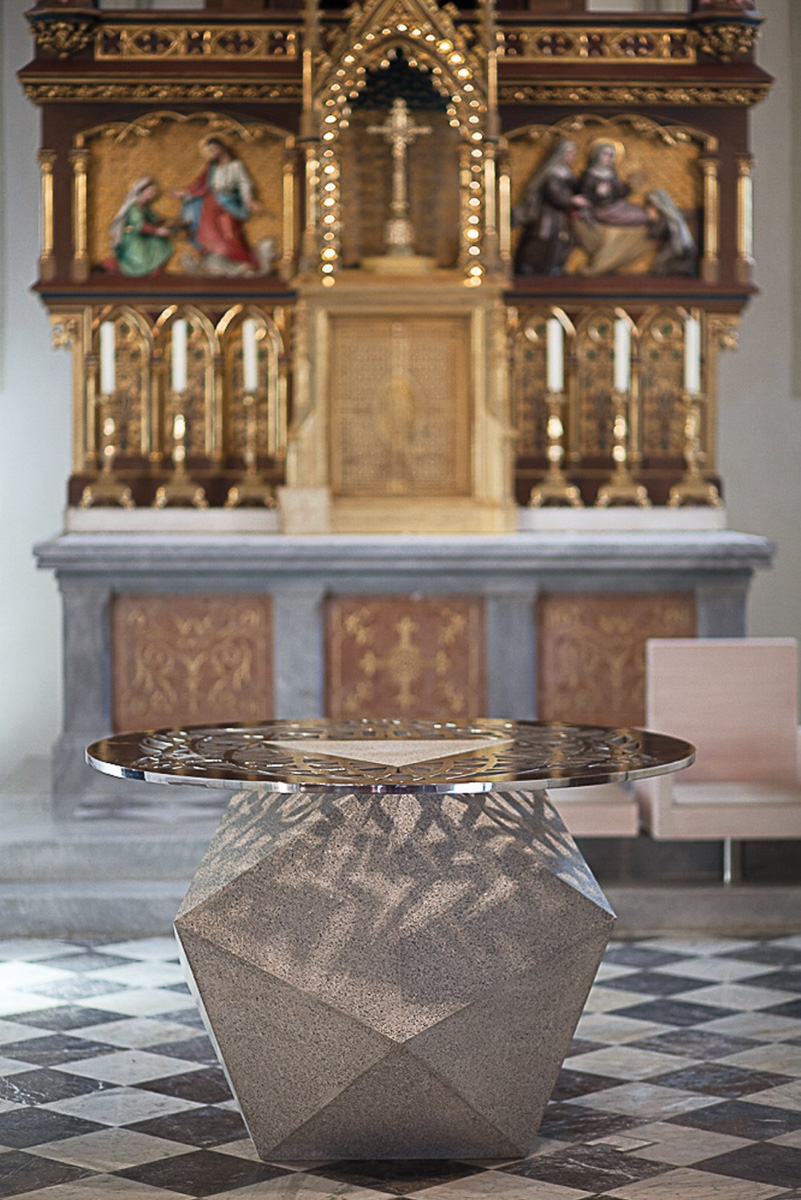 A Platonic solid and a light column are the new elements defining the late-Gothic choir of the parish church of St. Radegund. They were designed by the architect and artist Heidrun Primas (*1968). A round table, the stipes, an icosahedron made of limestone from the Schöckel Mountain, and the mensa as a pierced disc of chromed steel sheet, are placed against the backdrop of the neo-Gothic high altar. The knowledge of the spiritual and formal design principles of medieval builders huts, but also the idea of collective effort that makes an idea come true, are important aspects for the artist in her search for forms and materials. The icosahedron, a perfect geometrical body, consists of equilateral triangles and has twelve corners. It harbours the numerical symbolism of the divine, the mundane, and the twelve apostles. A large number of stones from the region has been collected and merged into a unity that makes up the monolithic character of the cast stone pedestal. But the small particles that make up the whole can still be perceived on its ground and polished surface. The circular mensa is concisely placed on one of the triangular surfaces of the stipes; thus stone and metal merge. Starting from the central stone triangle, a tracery network with dividers was constructed that forms the basis for the ornamental perforations of the mensa. The dividers in God’s hand as a construction tool for Creation, the use of them as a means to realise measure and proportion when building cathedrals, are images that are evoked in this context. A play of light and shadows, which dissolves the compact substructure, is created by the shining surface and the lace-like milling grooves of the steel panel. The round main altar adds dimension and wideness to the in itself narrow choir space. The ambo, a simple cylinder made of translucent glass, which is illuminated from inside, embodies the idea of a “light column”. The formal clarity underlines the significance of light in both the metaphorical and the actual sense. The main altar in its complexity and the ambo in its simplicity—both one of a kind—interact harmoniously, and create a special atmosphere of intimacy.