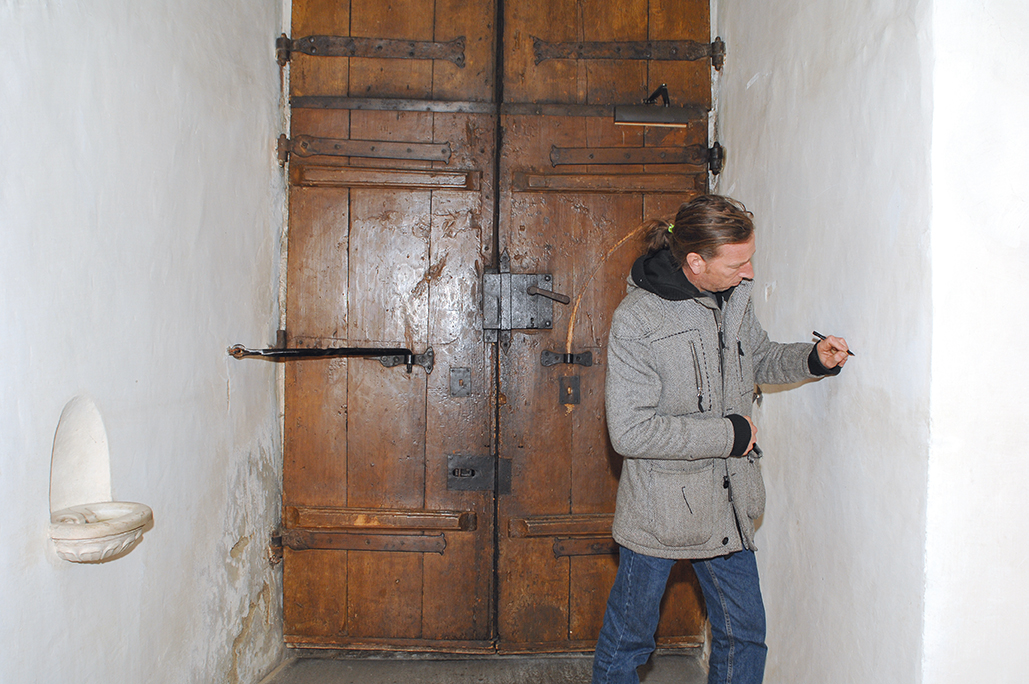 The welcome statement in the historical Leechkirche in Graz, the oldest church of the city, exactly opposite to the stoup, can easily be overlooked. However, the statement is programmatic: “We are (here).” Written on the wall with a fineliner pen, it is a conceivably subversive act right in the middle of a world to which the affirmation of God’s presence has become foreign for different reasons—not only due to dullness, noise and oversaturation, but for these reasons too. The written statement “Wir sind da“ (We are (here)) was submitted lastminute to the art project 1+1+1=1 Trinity (2011) at the Kulturzentrum bei den Minoriten by the Graz-based artist Markus Wilfling in the form of a note on a piece of paper (and won the second prize). Since 2012, it has become immortalised as a lasting work of art beside the portal of the Leechkirche in Graz, a church from the 13th century, and thus engages in a dialogue with a rich history of the sacral space which spans from the German Order of the Knights of the times of the Crusaders to the university church of the past tens of years. The words, the artist remarked at the time, “refer to every single one of us and everything in-between”. God manifesting himself in front of Moses from within a burning bush is the most forceful affirmation of presence in the history of religion, which also extends into the future: However, the “I am Who I am” (Exodus 3:14) is put in the plural here: “WE are (here)”. This goes way back into the time of monotheism’s origin— “elohim“ too is in plural—and at the same time it marks the individual stages of the development of the Christian belief in the Trinity. “Father, Son and Holy Spirit are (also) here.” Yet the calligraphy is not masterly, e.g. in the style of highly elaborated book art. It seems it has taken a great effort to write the three words consisting of nine letters in total beautifully by hand. Thus they stand out from all the superb stagings of the names of God and rather bear witness to intimacy. They also highlight the principle of communion—not only in the notion of the word God but also in the self-conception of those who believe in him. Monotheism, which is rather left standing in the face of seemingly tolerant polytheism in postmodernist discourse (Jan Assmann), is picked up in the plural here, and with a forceful affirmation of the present: “We are (here).” Probably, one only writes things like this if one is also expected.