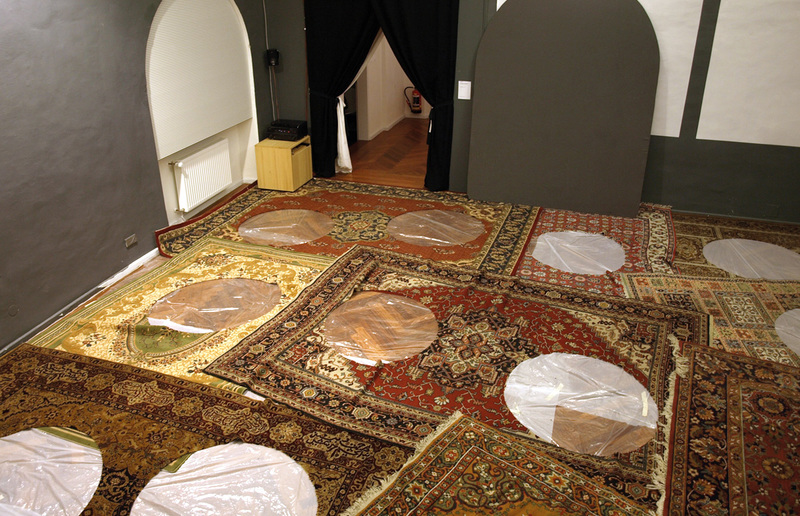 born in Übelbach, Austria, in 1965. He studied Theology and Art History. He was ordained as a priest by the Diocese of Graz-Seckau in 1991 and is a member of the Catho-lic Emmanuel Community. He has been parish priest of Graz-St. Andrä and Karlau, a multicultural neighborhood in Graz, since 1999. Glettler has been a self-educated artist since the 1980s and has engaged in curatorial activities since 1988. As an artist and member of the Diocesan Art Commission, he has developed and accompanied remarkable sacral art projects. As the initiator of ANDRÄ KUNST Glettler invited a large number of artists to work creatively at St. Andrä; i.a. he realized a church window project with 15 different artistic positions. The first 15 years of his curatorial activities were published in “ANDRÄ KUNST“ (Verlag Bibliothek der Provinz, 2013). Glettler’s works were shown in the KULTUM in the exhibition “IRREALIGIOUS! Parallelwelt Religion in der Kunst“ (2011/2012).

Presence, iconoclasm, denial and violation of the image are crucial keywords in Hermann Glettler’s artistic output. Glettler had dealt with abstract painting for more than ten years before he eventually quit painting. He has become increasingly interested in erasing central patches of images in order to achieve intensity in the pictorial solutions precisely through this. Developing further this artistic method, he began to paste over photographs, posters, and other found images. He used colorful stickers, self-adhesive image markers, gaffer tape and similar things to introduce another level of pictoriality and reception. Cutting out circular dots or discs from images became more and more interesting for him. The work “WHOLLY REAL“, which was presented for the first time at HDLU Zagreb, consists of cut-outs of partly used and partly new carpets. Carpets are particularly apt for any violent visual access because they are themselves already very complex carriers of pictoriality and meaning. The cutting out of the discs interferes into their functionality. They are not available anymore for any obvious use in homes, public representation spaces, churches, and mosques. Precisely for this reason, Glettler composed such a carpet with a “colon” as the altar image of a “Lent cloth installation” in his church. The complex fabric of ornaments and pictorial patterns with their highly specific meanings and symbolical references is considerably disturbed through the removal of circular surfaces. In their arrangement, the cut-out discs do not respect the readable geometric basic pattern of the carpets but deliberately chafe at them, apparently following the principle of contingency. Nevertheless, the cut-out blanks create a new center which can increase the intensity of the image-bearing medium “carpet”. The removed disc lacks all narrative reference and thus continues the attitude of criticism of the image, which is inherent in all serious pictorial development. That the series of carpets also deals with the iconoclastic basic attitude of Islam is obvious. The cultic use and religious meaning of the carpets is both critically thematized and reinforced in a dialectical sense. Precisely through their trashy nature and denial of forced symbolism, the blanks that lay bare worthless plastic, are nevertheless references. Precisely in their violated version, as created by cutting out the discshaped surfaces, these portable floor coverings have become carriers of meaning again, as to be found in the best tradition of oriental carpet art.