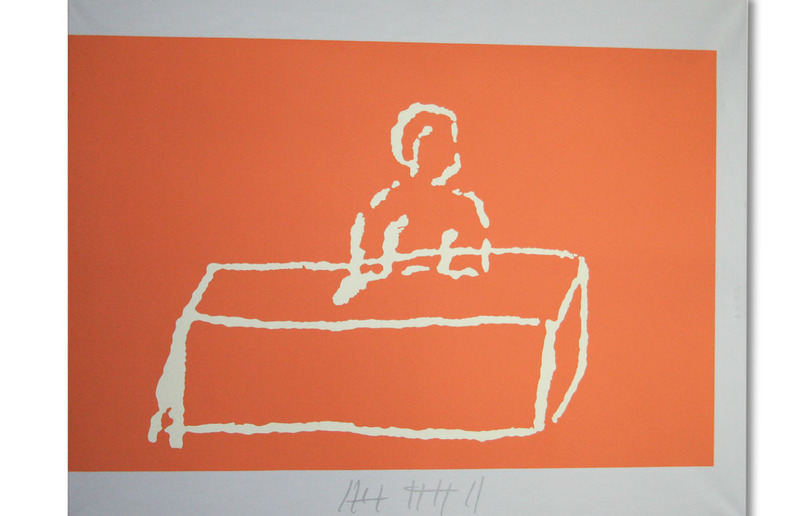 born in Brandleben, Germany, in 1950; lives and works in Wülfte, Germany. He studied Painting in Hamburg and Vienna, published the magazine Hans Kultur, and created the series of works “Die Expedition“ together with Thomas Kling in 1990. From 2009 to 2012, Gaida designed the interior space of church of the Augustinum, Graz, by putting pictorial set pieces of history into a contemporary context. Gaida’s works were shown in the KULTUM in the exhibitions “Klaus G. Gaida. Es fünf aber die“ (2007) “Klaus G. Gaida: Die Mittel der Malerei“ (2010), “RELIQTE“ (2010) and "Klaus G. Gaida: "Argument wie 1 Tulpmstengel" (2017)

Reduced and simplified, the Last Supper created by the German-Belgian artist Klaus G. Gaida is nevertheless unfolding on multiple dynamic pictorial planes. A lonesome figure is presented in front of a table diagonally from above. It is elaborated in stylized coloring and design, with blue, auburn and yellowish white on natural shades and a line that reminds of the airbrush tool of digital drawing Apparently, any loud and graphic presence is avoided to make room for the plane of imagination with regard to this table, for the gesture of invitation, the expansive view of the contoured figure, the clearly marked but nonetheless not exactly defined grasp for the center. It invites us to contemplate and to come to our senses. The auburn surface is shifted, or rather folded, into the picture from the left, which marks residual motion. Under the table, the gray color of the surface, a pictorial plane obviously lying underneath, is stabilized in the center by both delicate and dynamic gray lines: The count of lines gives twelve. Any immediate visual correlation between the viewer of the picture and one of the disciples is thus suspended; at the same time, an imaginary continuation of the count is left open as a possibility. Moreover, the dynamic count of lines makes sure that there is no hierarchy but equality of all before the master sitting at the table.