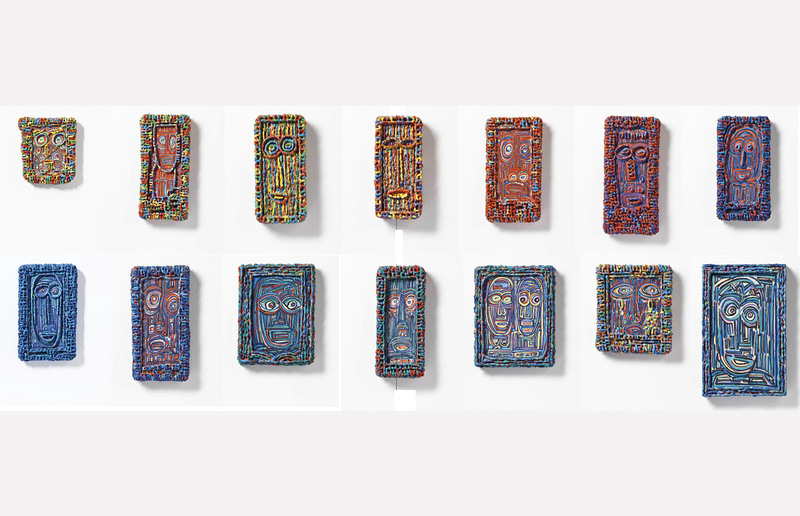 born in Eggersdorf near Graz in 1951; lives and works in Baldau (southern Styria, AT). Neuhold studied Theology in Graz. In 1977, he was ordained as a priest and was suspended from office in 1978. Then he studied and gra-duated at the Academy of Fine Arts Vienna, in Professor Melcher’s class. In 1986, he became a member of the artists’ group Gruppe 77, whose President he was for a long time. His graphic works were represented in renowned exhibitions of the young Austrian generation of painters in the 1980s. Neuhold was shown in the KULTUM in the exhibitions “Alois Neuhold: Wenn dir die Welt einsteint“ (2005)and “LICHTMESZ“ (2009). In the frame of the comprehensive retrospective in the steirischer herbst festival 2013, “Alois Neuhold. NICHT VON HIER“ (2012/2013), the monograph “Du musst dir die Augen ausreißen und die Hände an die Ohrstiegen legen“ (edited by Johannes Rauchen-berger and published by Springer Publishing House Vienna-NewYork) was produced.

The life of Jesus Christ in 16 verses through the eyes of Simeon and Hannah: An unusual series by the painter Alois Neuhold, who belongs to the generation of “Neue Malerei” (New Painting) which was created in the course of the project “LICHTMESZ“. The artist, who lives in a picturesque hermitage in southern Styria, has worked with the human figure and the face in uncounted variations for more than three decades—in small crayon drawings, tableaux, or shrine-like ramifications and nestings—, and mythically, fabulously, and playfully transformed it, and integrated it in “Erdflechtromanik“ [Earth Braiding Romanesque] and “Zweigerlgotik“ [Twig Gothic]. Moreover, light is particularly strongly present in all his works due to the density and intensity of the colors. Iconographic echoes of medieval formal rigor—for example, Romanesque enamel painting, Gothic winged altars or iconlike gazes—and playful lyricism, as it can be experienced in authentic folk art are distinctive. But a continuous leitmotif is the authentically childlike in Neuhold’s works. Inspired by the lyricism of Paul Klee’s art, Neuhold’s art is fuelled by the strong belief that he sees the divine exactly therein. Neuhold already started early to understand the image body in sculptural ways. Pictorial volumes filled with color whose rigor seeks to adhere to the small image format, extend maximum color density also spatially into the third dimension. He has taken the brightness of the colors from his own theory of light. The essence and the secret of light reveal themselves in the colors. Firmly restricting itself to the smallest space, the color body of the image provides the sensual experience of an idea of the incarnation of light. The image as such is palpable in its heights and depths—each layer of this airy image body was painted little by little and exaggerated again, so that its depth has an effect in the end. Thus the compression of the view can be sensually reproduced. For Neuhold, to capture stories written by life in pictures and bestow them with their poetic power is the essence of the artistic act. Yet his is contemporary enough to avoid to specify a specific content of (the)(hi)story but leaves it open to the viewer’s imagination. The vast majority of the tiles of his innumerable small images is poetically alienated in order to evade easy access or to extend their meanings. In the series “Denn meine Augen haben geschaut“ [For My Eyes Have Seen], the title reminds of the “Nunc Dimittis“ of the prophet Simeon. “ But the prophet Hannah sees the rest of this little child’s life in the same manner. Both see the salvation as well as the abyss. For Neuhold’s art cannot be conceived without ambivalence—a detour follows a possible trace, ambiguity follows clearness, and an abyss follows the promise: Thus CANDLEMAS is not only the brightness of the child’s face for old Simeon but also the beginning of the contradiction: “This child is destined to cause the falling and rising of many in Israel, and to be a sign that will be spoken against” (Luke 2:34). Salvation and harm, laughing and crying, joy and pain (the sword), ground and abyss, dictum and contradiction—this is what these two prophetic people see.