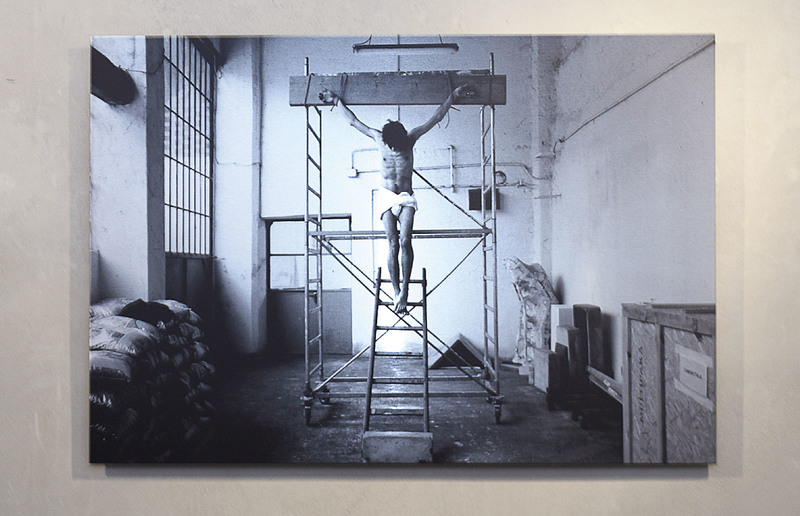 Adrian Paci: Study for a Crucifixion, 2011

Again and again, human suffering is a subject in contemporary art. Yet, passion has been a subject in art for a long time. Recently, not much more remained of it—or more precisely, the cross—in the contemporary discourse of art, society, and even the church, than a provoking and sometimes blasphemous gesture. The more surprising is this “Study for a Crucifixion” by Adrian Paci, which shines because it is so touchingly unfractured. At the same time, it forms the 12th station of a way of the cross which is located in the Church of Saint Bartholomew in Milan—the first work of this renowned artist commissioned by the Church. Like all other stations, the crucifixion takes places in the artist’s studio. As if there was anything to domesticate in analogy to the smallness of the usual pictures of the way of the cross. Paci staged a Passion play reminding of Pier Paolo Pasolini’s esthetics. The remaining stations are screenshots of this moving play. This flow of time is interrupted only once—at the 12th station of the death of Christ: In this respect, it is also logical that this image also exists in the form of a large-format photograph, like in this work. But there is no cross, only a scaffold and a ladder. And the figure of the crucified reminding us of the stereotypes of uncounted crucifixes evokes that scene: Paci wanted to avoid at all costs the “rhetoric of suffering and triumph” (Werner Hofmann), which is so often associated with the crucifixion. The loneliness of Jesus on the cross was what he considered much more appropriate for this study of the cross.