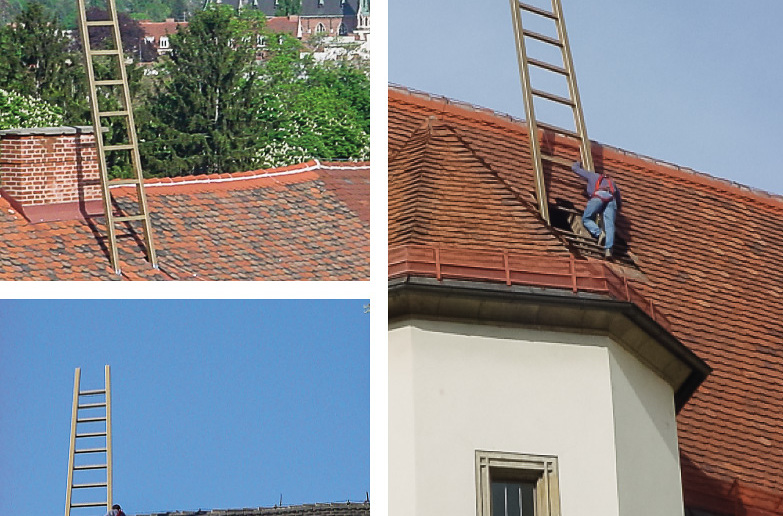 In the frame of the exhibition “Himmelschwer” (“As Heavy as the Heavens”), Maaria Wirkkala’s glass ladder was hanging almost invisible in the woodwork of the truss of Graz Cathedral, which was built in the end of the 15th century. In order to see it one had to climb the historical staircases inside the Cathedral which lead to three chapels on top of each other—the court oratories of the Holy Roman Emperor since Frederick III. When one opened the door of the last chapel, which offers the view on the presbytery at the very bottom of Graz Cathedral, one saw the truss with its dust and its fascinating rhythm. Sacred pictures from the 19th century were lying around in the immediate entrance area which had once been disposed of because people were weary of them. But in our view’s vanishing line the sparsely illuminated glass ladder of Maaria Wirkkala’s “THE INVISIBLE“ was hanging. What was even better visible was the shadow the ladder was casting on the pole behind it. Material things at the border of their visual disintegration, of transcending into another world.

“The view is the precious!“ This is what Maaria Wirkkala shouted from the tower of the Graz Mausoleum, which was open to public for the first time on the occasion of this intervention and which opened up views on the marvelous roofscape of Graz from the “city crown of Graz”. When Maaria Wirkkala visited Graz for the first time, there was a ladder present, which may have been left by construction workers in the course of the restoration work (maybe because one rung was missing). The missing rung was replaced by a glass rung, which turned the ladder into a work of art: “The FRAGILE“ was the starting point of her three-part installation “TIRAMI SU II – Back to the Roofs”.

TIRAMI SU, the title of Maaria Wirkkala’s art installation at the Venice Biennale (1995) and in the exhibition ”Himmelschwer“ in Graz (2003), is not only an Italian dessert but simply means “Pull me up”. Maaria Wirkkala merges the metaphor of rising with the taste of festivity. But which thresholds have to be overcome to taste it? In order to distinguish between the possible, the imaginary, the symbolic and the purely real one needs a school of seeing, of empathy, and imagination. Her ladders must be climbed in the mind, not in real life. Infinity has to be imagined. Maaria Wirkkala titled her Graz installation “TIRAMI SU II – Back to the Roofs”. On the roof of the venerable Landhaus, on the roof of the Grazer Burg, and on two other roofs, golden ladders were reaching up to the sky. Because of its roofs Graz is a World Heritage City. To lay hands on anything belonging to this was only thinkable and possible in the frame of Graz 2003—European Capital of Culture. “The View Is the Precious“ was the subtitle of the third part of her installation.